96% of the electricity in Cuba depends on fossil fuels, most of it imported. 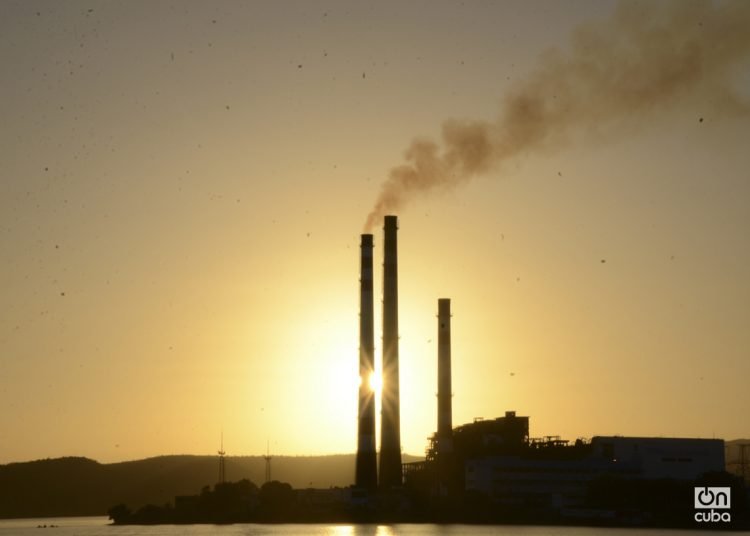 The last time I was at the Diez de Octubre Thermoelectric Plant in Camagüey, in mid-2011, the combined capacity of its three main generators reached 375 megawatts/hour (MWh), which in circumstances of need could be increased with another 100 MWh contributed by an older unit and a group of nearby generators.

In round numbers, the production of the Nuevitas plant practically tripled the demand during peak hours in the province of Camagüey.

However, one of its engineers insisted that I should not leave there full of enthusiasm. “All of our generating units are working at the limit of their possibilities, and in fact, the oldest one [number three] has only a few years of useful life left. It is so inefficient that it is only worth synchronizing it when the demand is very high,” he confessed to me then, as we gave way to a truck loaded with large metal structures disassembled from the old blocks, one and two. By selling them to the raw materials enterprise, the management of the thermoelectric plant had gathered the necessary resources to extend the scope of repairs ordered by the then Ministry of Basic Industry. Sooner or later “those solutions” would not be enough to prevent deterioration, my interlocutor predicted.

Time ended up proving him right. At the end of last July, the Diez de Octubre was preparing to disconnect its unit five from the National Electric Power System (SEN), with a view to a repair that would seek to increase its contributions, which from its designed 125 MWh had decreased to 70. Overall, the three surviving blocks of that industry added barely 250 MWh; generator number three has gone out of service years ago.

During the summer that is ending, the Nuevitas thermoelectric plant was one of the ones that suffered the most breaks. It even came to the point of not having any of its units online. But it was not the only one in such a circumstance, nor was it affected exclusively by the sustained collapse of energy efficiency.

On the other hand, at the time of its synchronization with the SEN, in 1988, the only engine of the Antonio Guiteras plant, in Matanzas, was capable of generating 330 MWh, almost 100 more than what it has contributed on average during the last two years. Other plants such as Máximo Gómez (Mariel) or Antonio Maceo (Santiago de Cuba) have also had to review their deficit indicators for electricity generation. An extreme case is that of the Lidio Ramón Pérez plant, located in the Holguin community of Felton, whose unit number two is operating at half its design capacity (130 of 250 MWh), while the one, recently repaired, is unable to stabilize generation due to the breakdown of components that — such as the boiler — were not included in the reforms due to lack of financing.

The deterioration of thermoelectric plants, on which about 60% of electricity generation in Cuba depends, is the fundamental cause of the wave of power cuts that the country has suffered for months, especially the provinces in the interior of the island. The rest of the technologies are designed as a complement to that “base generation…that with 36 years of exploitation on average…requires a great effort to maintain its availability,” as was acknowledged last March by engineer Jorge Armando Cepero Hernández, general director of the Cuban Electricity Conglomerate.

The country’s thermoelectric plants (four in the West, two in the Center and two in the East) stand out within the group of “essential infrastructures” (among which are the communication routes, the hydraulic networks….) that until the end of the 1980s benefited from the bulk of government investment; and that after 30 years of successive economic crises have ended up in a particularly compromised situation.

At least in the medium term, there are no prospects that Cuba’s energy matrix will change. Despite the projected increase in renewable energy sources in the country, which by 2030 is expected to cover a quarter of demand, the bulk of electricity generation will continue to be sustained by the national “crude” oil used by the thermoelectric plants, imported fuel oil and diesel, which, at the price of gold, keep the generators on the island running.

This is what the official figures show, according to which 96% of electricity in Cuba depends on fossil fuels, most of it imported. In 2018, the most recent year for which statistics are available, the country imported 54% of the energy carriers it used, accentuating its vulnerability in the face of international shocks. In September 2019, when nothing made it possible to anticipate the appearance of COVID-19, and the world economy was growing vigorously, President Miguel Díaz-Canel declared the “temporary” situation in an official radio-television appearance. Some shipping companies’ refusal to disembark shipments of fuel, paid in advance, had been enough to put the country’s reserves in the red. From then until now, the money available for purchases became more scarce, forcing a postponement of many of the maintenances planned for the old electricity generating plants.

Migration to renewable energy sources is often a long and costly process. Of the technologies available to increase generating capacity, no advantage in terms of speed and costs for the “old” thermoelectric industry.

Under Cuba’s conditions, the construction of a generating unit usually requires between two and four years of work, and around two million dollars per megawatt of power. The replacement of the old thermoelectric plants would imply an investment of at least five billion dollars, which Havana — obviously — doesn’t have.

The construction of four new generating units distributed between the Mariel and Santa Cruz del Norte (Ernesto Che Guevara) plants, with a joint capacity of 800 MWh, paid for by a Russian loan of 1.4 billion dollars, represents only a limited “relief.” This project was designed to start up its first generator block within a couple of years, in parallel with another program, also funded by the Kremlin, for the modernization of 10 thermoelectric units. But, even ignoring the delays caused by the pandemic and Havana’s financial difficulties, it is not enough to change the fact that the Cuban energy system is based on an infrastructure that has been overpowered by decades of overexploitation.

Significantly, there does not seem to be a real interest in attracting capital with which to implement a contingency response to this situation. Regarding the subject, the last Portfolio of Foreign Investment Opportunities is limited to listing proposals such as those of eight bioelectric plants to be installed in sugar mills, or seven new photovoltaic parks.

The passivity of the Cuban government in this regard contrasts with the attitude of other leftist administrations that in the continent have opted for a greater participation of private investment in their energy development plans. For example, during his tenure (2010-2015), Uruguayan President José Mujica made an effort to incorporate private companies into wind projects such as the one that was being built in the department of Maldonado. “This is a perfect business deal as a policy for the country, for those who have the courage to invest and for generations to come,” Mujica said when inaugurating the park installed in that area by Spanish entrepreneurs.

This decision, taken against the grain of the “statist” tradition of the Uruguayan electricity industry, contributed to the small nation increasing its energy availability, to the point of having “surpluses” that it now exports to Argentina and Brazil.

In Cuba, one might wonder if a similar strategy would not help to recover the lost capacities of the thermoelectric industry; the same that for decades has been deteriorating at a forced march, and that, environmentalist susceptibilities aside, continues to sustain most of the national electricity demand.