These measures, which were announced this Tuesday by Minister of Communications Jorge Luis Perdomo, include the reduction of the price of voice and data packages in mobile telephony between 1:00 and 6:00 a.m. 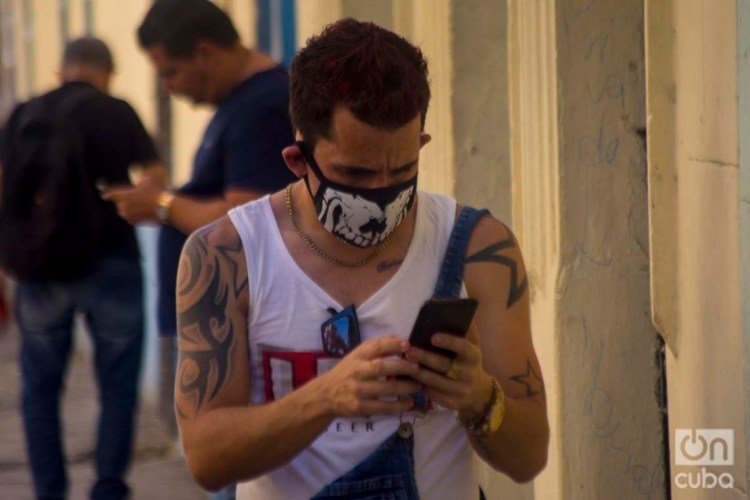 A Cuban checks his cell phone in Havana wearing a facemask as a protection measure against the COVID-19 pandemic. Photo: Otmaro Rodríguez.

The Cuban Telecommunications Enterprise (ETECSA) will launch a group of measures during the current situation caused by the coronavirus pandemic, which include lowering rates and extending the validity of some services.

These measures, which were announced this Tuesday by Minister of Communications Jorge Luis Perdomo, include the reduction of the price of voice and data packages in mobile telephony between 1:00 and 6:00 a.m. and a 25% discount for national calls made between 6:00 p.m. and 5:59 a.m. with prepaid cards.

Likewise, the validity of the bonus of the second international recharge in March and those acquired in April was extended to 30 days, while in this same month 10 hours will be added to the contracted Nauta Hogar home internet package and once they have been consumed, the additional hours will cost 0.30 CUC (Cuban convertible pesos).

The ETECSA note does not specify for how long these measures will be in force and affirms that their characteristics “will be reported in a timely manner once they take effect.”

In addition, it specifies other measures that are already applied “as a complement to the measures adopted by the country in the face of the pandemic” of COVID-19, including a 10% discount for the payment of telecommunications services through the application Transfermóvil, between last March 27 and until April 30.

Also the extension of the life cycle of mobile lines that expire between March 25 to April 30, and the payment of the telephone bill, ensuring that “the service will not be disconnected.”

For its part, from this April 1, the life cycle of Nauta Hogar services that would cause termination in April due to non-payment was extended 30 days, and until June 30 the life cycle of permanent nauta accounts that are due as of March 30, 2020.

Other extensions include the payment of Commuted Internet Access services for the residential sector, whose invoice was due on March 31; that of the payment of the monthly fee of the TFA until April 30; and, a 60-day guarantee for equipment purchased in the commercial units of ETECSA, whose expiration date is in April.

Finally, free access to the contents of the sites www.cubaeduca.cu and mined.gob.cu was granted from Nauta Hogar and by mobile data, to facilitate access to educational materials during the period in which schools remain closed.

All these measures have been taken by ETECSA amid requests from the Cuban population for the enterprise to lower its rates and establish other facilities during the context the island is going through due to the coronavirus pandemic, a disease that already has 212 confirmed cases in Cuba and has caused the death of six persons.

Days ago, the executive president of the state enterprise, Mayra Arevich, said there was a 10% additional volume in traffic growth on the networks―a figure that increased this Wednesday to 30%―and advised Cubans to not consume “large volumes of data on the mobile network, so that the traffic capacity can be shared among all.”

At the time she affirmed that ETECSA “is engaged in guaranteeing the stability of the voice and data network at a time of constant surveillance of the COVID-19 in the country.”

Cuba kicks off April with a total of 212 COVID-19 patients, with no new deaths

COVID-19 at close of first day of April: 233 infections in Cuba, no new deaths

COVID-19 at close of first day of April: 233 infections in Cuba, no new deaths

Cuban radio and television to broadcast programming for Easter