It is a technology “exclusively developed” by the Japanese company, used in professional baseball in Japan, as well as in other disciplines, in addition to being used in the Tokyo 2020 Olympic and Paralympic Games. 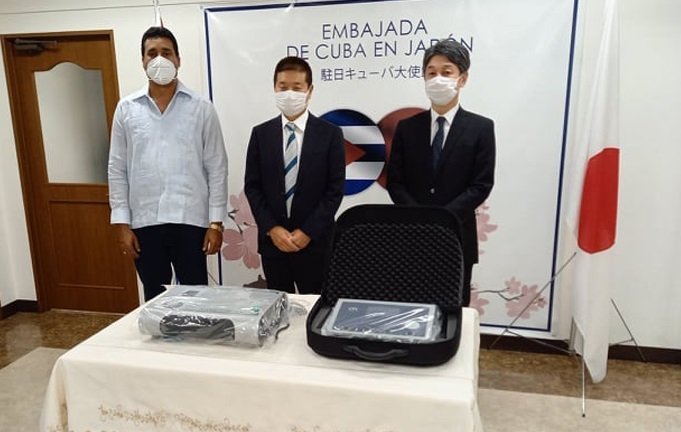 INDER’s first vice president, Raúl Fornés (left), together with directors of the Japanese company Techno Link, which made a donation of two equipments for the rehabilitation of Cuban athletes. Photo: Agencia Cubana de Noticias news agency.

The Japanese company Techno Link donated two advanced equipments to Cuba for the rehabilitation of the island’s athletes, according to official sources.

It is a technology “exclusively developed” by the Japanese company, used in professional baseball in Japan, as well as in other disciplines, in addition to being used in the Tokyo 2020 Olympic and Paralympic Games, reported the Jit website, which does not specify how they operate.

The donation was delivered in person by Kanda Jin, president of the company, who “expressed his admiration for the island’s outstanding results in the recently concluded Games and reiterated the will to continue supporting Cuban athletes who participate in international competitions, including the next 2024 Paris Games,” according to the sports publication.

On the Cuban side, the equipments were received by Raúl Fornés Valenciano, first vice president of the National Institute of Sports, Physical Education and Recreation (INDER), who “thanked the gesture and highlighted Techno Link’s cooperative relationship with Cuba for a decade.”

The ceremony to hand over the donation was held at the Cuban Embassy in the Asian nation, which was attended by Cuban multi-champion Omara Durand, along with her guide Yuniol Kindelán, as well as officials from the diplomatic mission.

The island’s ambassador to Japan, Miguel Á. Ramírez, handed over a diploma of recognition to the Japanese businessman for his contribution to sports medicine in Cuba, and released the news on his social networks.

During the last 2020 Tokyo Olympic Games, authorities from INDER and the Institute of Sports Medicine of Cuba visited the headquarters of the Japanese company “to strengthen cooperative relations in this sector,” said the Agencia Cubana de Noticias (ACN) news agency.

According to the news agency, “Techno Link has extensive experience of collaboration with specialists from the largest of the Caribbean islands in attending to Cuban teams in sports competitions in Japan and other nations.”