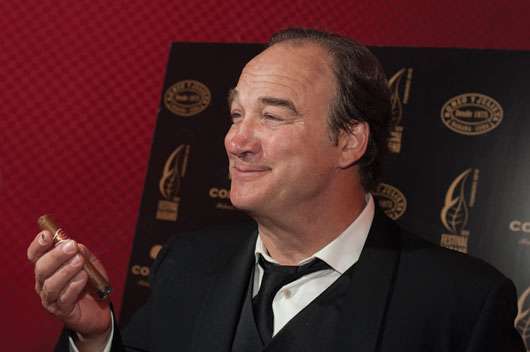 The US actor, musician and comedian, Jim Belushi was recently in Cuba to celebrate the XIV Habanos Cigar Festival (from February 27 to March 2).

As forthcoming and funny as usual, Belushi made clear that the Island’s greatest attraction is its inhabitants. He also said that he is a cigar fan which was why he chose this occasion to visit Cuba.

His joy, almost impossible to conceal, led Belushi to play the harmonica for the public attending the closing ceremony gala in one of the halls of PABEXPO.

Wearing his two-piece black suit, at times loosening his tie, Belushi seemed to enjoy each time he lit a habano in front of photographers, showing his good-natured and playful style.

We were able to speak privately with the actor for a few minutes. He took the opportunity to explain that even though he has tasted many cigars, he is very impressed with the quality and beauty of the Premium, manufactured entirely by hand.

James Adam "Jim" Belushi (Chicago, Illinois; June 15, 1954) started his career toward the end of the 1970s in television series and made his cinema debut in 1981 with the film Salvador, by Oliver Stone. In 1987 he shared top billing with Arnold Schwarzenegger, playing the role of Ivan Danko, a Moscow narc, in the film Red Heat, by Walter Hill, where he discovered his passion for cigars in a scene in which he lit a Montecristo.

In this trip to the Island, Belushi visited plantations and enjoyed learning about the production process of Cuban cigars from a tobacco-growing family. The popular actor was very happy. He made an effort to speak to all at the same time. Then we asked him if he would return to Cuba and he replied: next week, of course.

The life of Pichy as told by himsel