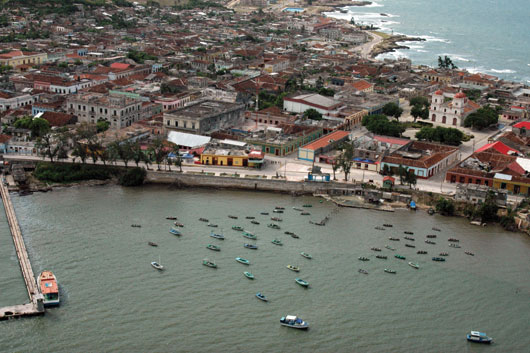 Gibara, the White Village (“Villa Blanca”) or Village of the Crabs, is a town full of magic and wisdom, where art and traditions come together with legends and history, distinguishing it as a city of singular evolution and beauty, positioned among the settlements founded in the former Eastern Department of de Cuba.

Located between the municipalities of Rafael Freyre and Calixto García and bordering Las Tunas province to the west, Gibara has an area of 630 square kilometers. It is on the shores of the Atlantic Ocean, close to the provincial capital of Holguín. Years ago a railroad connected the two and the train stations close to both cities have survived the passage of time.

Declared a national monument in 2004, the village counts among its most valuable architectural monuments the Fernando VII Battery, colonial testimony to what was the second walled city on the island. Its inauguration marks the village’s founding date, established, according to historians and chroniclers, on January 16, 1817.

The inhabitants proudly describe the night that Isadora Duncan danced at the Gibara Theater, considered to be one of the best in the country at the time. The exact date is uncertain, but it is said to be the result of an accidental breakdown of the schooner in which she travelled, which happily ran ashore on the coast of the village.

The dates that gibareños are sure to remember today are those related to the frequent visits of the national film award winner, Humberto Solás, who after filming time and time again in Gibara, conceived from inside one of its forts what is internationally known as the International Budget Film Festival, created to de-emphasize the divide between rich and poor in order to diversify national identities.

One of the most impressive attractions of Gibara, captured repeatedly on celluloid by filmmakers from five continents, is located in the center of its main plaza, today named Calixto García. It is a splendid replica of the Statue of Liberty, erected in in 1915 thanks to the contributions by locals, a monument that is a universal symbol of the original in the United States, with replicas also in France, Argentina, Austria, Germany, Italy, China, Japan and Spain.

The idea was conceived by Enriqueta de la Torre y Delgado, who began raising funds the year before. Other names associated with this history are Mercedes Sirvén Pérez- Puelles, a veteran of the War of Independence against Spanish colonialism, who was entrusted with unveiling the monument, and Aurora Pérez Desdín, a young Gibara woman who served as the model for the statue’s face.

A giant swordfish and a huge crab crown one of the modern plazas located near the city entrance, site of important cultural events which incorporate home-based traditions, making the municipality one of the region’s richest in craftsmanship.

The fishing tradition is responsible in great measure for the imagery of the handicrafts. The large nets used for fishing typify an example of hemstitch comparable to other traditional styles of our continent but with the industrial speed of the spinning mill, which constitutes one of the most valued sources of employment in the municipality.

Close to this legendary spinning mill you can hear the constant toil of the Gibara shipyard, visited daily by curious passersby and residents, particularly those small boat owners who have seen a thousand moons pass waiting for the signal to launch to sea. Their fishing boats exhibit names and inscriptions that speak to the passage of time and family traditions.

This seaside resort of Holguín offers a wonderful Museum of Natural Sciences and another of Decorative Arts. The first one exhibits prominent species native to our coral reefs. In the second we witness the splendor of the village’s facades and interiors which emphasize their utilitarian beauty. There is even a striking painting made from human hair that bears testimony to the love affair of a couple that was unhappily dissolved by the mortal illness endured by the beloved woman.

Not by chance, faced with the political situation of the Eastern Region and abandoned by the Crown, Gibara was a place in colonial times that experienced a development limited to the survival of the population. This marked her with all of the good and the bad that besets seaside cities, and the narratives of buccaneers and smugglers are not dissimilar from some of the local notables who took every opportunity to make it rich.

Gibara combines all of the attractions to warrant repeat visits, by those who prefer to see the transformation of a place that at the same time seems stopped in time. At present Gibara is in the midst of a process of restoration of its principal lodging and architectural facilities, which makes it a required destination for a future visit, although its doors have always been open to those who across time have favored diversity.