Let’s go to the beach

We Cubans love going to the beach during the summer. It's the same as saying that, in some incomprehensible way, we love the crowds and the noise, the scorched skin and the sweating in groups. 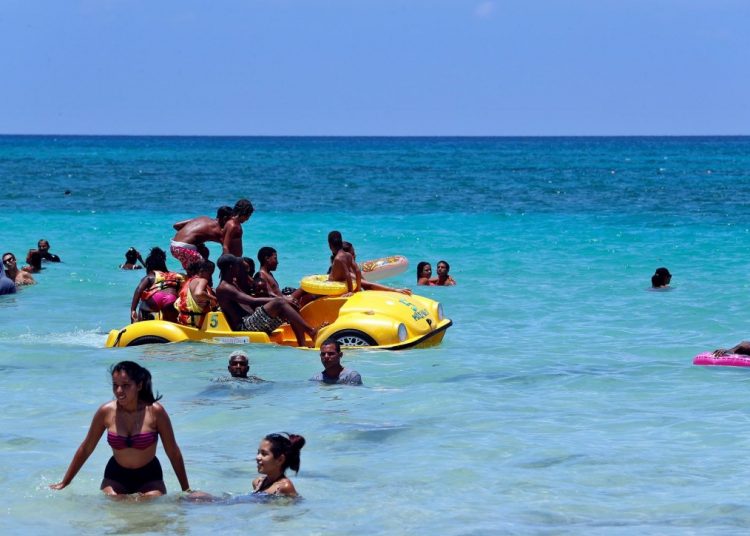 Going to the beach on this island is like going to a party. Photo: Ernesto Mastrascusa / EFE.

The beach in Cuba generates unlimited affection. Sometimes it seems like a principal religion, above all the divine, black, white, Chinese and mulatto heads.

In Cuba, where it is hot the year round, and increasingly more with global warming, going to the beach in July and August is the right time. For Cubans, it is anguishing if the water isn’t warm. For us neither March nor October are good for going to the beach.

Group psychology dictates, then, that to take a dip the main thing is that there be a lot of sun and many people. The more, the better.

It doesn’t matter if the compass leans towards the elitist Varadero or the proletarian beach of 16 in Miramar, Havana’s Guanabo or Santiago de Cuba’s Siboney, what cannot be postponed is going to the beach in summer, to feel the whiplash of the saltpeter in the middle of the afternoon and the impact of the sea on the retina. All that surrounded by hundreds and hundreds of people.

To guarantee the quorum, summer beachgoers summon the entire family. And friends. And coworkers. And schoolmates. And even the neighbors. So no one will feel left out while thinking they look like Michael Phelps or Katinka Hosszú to impress the opposite sex. Or one’s own. Or while scorching themselves with pleasure on the burning sand.

Some, generally those who can afford it, rent a house or book a hotel, which usually includes stable food and safe transportation. In CUC. They are the “well-off” beachgoers.

However, what’s the most funloving, the most practiced adventure on the island, is a round trip on the same day. Getting up early, which for most Cubans at this time of the year is after 8:00 in the morning, quickly preparing a backpack and going out to “struggle” to get a ride on a car or whatever appears.

The distance from the beach is directly proportional to the enjoyment. The further it is, the better it is once there. The more a child cries in your ear, or someone steps on your feet and your entire body is massaged by the crowd, you suffer the bumps on the road and you fiercely sweat on the truck or the bus―no doubt, the favorite means of transportation to go to the beach in Cuba–, the more you can enjoy when you finally arrive.

It doesn’t matter that afterwards you have to go through the same torture on the return trip. Or even worse. As the saying goes, “I’m going to enjoy myself while I can.”

Although in reality, what you least do at the beach is swim.

If you want to swim, really swim, you better aim for a sports area and cross your fingers so that the pool has water or chlorine. That it’s working even if it doesn’t come out in television reports.

On the beach, okay, a few strokes. Float for a while if your weight or the waves allow it. Dive as if you were in deep sea, but don’t forget that half a meter ahead, or behind, or in any other direction, you could inevitably collide with someone. A fat woman or a skinny man. A child or his father. A curvy girl or her boyfriend. After all, it isn’t in the deep sea.

You better do what everyone else does. Get in the water to cool down, to socialize, to kiss the girlfriend (or boyfriend), to contemplate the landscape. The natural and the human one. Although you should always be careful with the latter, it might be that your partner discovers what you’re looking at and you return home with a black eye.

If you went with a group, surely someone brought a ball or a domino set. And surely also a bottle of rum. Or more than one. And a good loudspeaker to “liven up” with music at full blast. Although surely not with Mozart or with Chucho Valdés. Hopefully, with Los Van Van. Without it, imagine….

In any case, take advantage of the occasion, but with moderation. Having a discussion over a game of domino or losing consciousness by accumulating blood alcohol could completely turn the day sour and even jeopardize your life. Rum, after all, is not good for sports, and less for swimming.

In addition, on the beach it is advisable to stay sober. Fully alert. There may be sharks in the sea, but on the sand there are lynxes. If you turn your back more than recommended you may be left without a wallet. Or without flip flops. Or without clothes. Or without a cell phone. Or without a partner. Or even without all that together.

The beach can be a very dangerous place.

However, Cubans don’t seem to care about the danger. At this point, what are we going to worry about, and to prove it we show all our courage and enthusiasm by taking the dog and the baby for months to the beach. So they can learn.

If there are no trees or sun umbrellas, rustic tents are put up with four sticks and at lunchtime it’s time to take out the food from the countless bags and backpacks carried throughout the journey. We can also raze any kiosk or soda, fruit or fritter vendor along the coast. Or everything at the same time.

We Cubans forgot centuries ago―it’s a way of saying―to be careful not to bathe with a full stomach, because you have to take advantage of every minute. We are not scared of or immune to a stroke. Many dash into the sea after having eaten half a pot of beans and rice with tamales and avocado, or three ham sandwiches, without cheese, when with much less in the stomach they wouldn’t even think of taking a shower. And they are happy.

So, if someone is still hesitating about living this adventure this summer, they should take advantage of what’s left of August. You have to keep up the tradition: scorched skin, soaking in the hot water, you may as well look at the bright side. That the beach is definitely the best thing we have.