The project led by two young Cuban entrepreneurs took on its most important work to date: the organization of the dinner hosted by the king and queen of Spain in Havana. 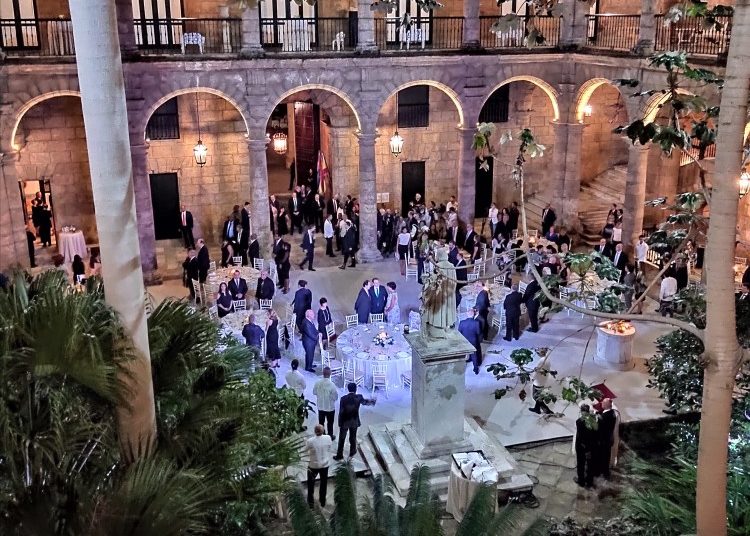 The official dinner hosted by the king and queen of Spain in Cuba took place in the Palace of the Captains General. Photo: courtesy of the interviewees.

The Palace of the Captains General made its centuries-old courtyard beautiful on November 13 with a special decoration for a very exclusive event. The building, which started being built in 1776, served as the venue for the official dinner hosted by the king and queen of Spain, Felipe VI and Doña Letizia, during their recent state visit to Cuba.

The meeting between the monarchs of the Iberian nation with Cuban President Miguel Díaz-Canel took place in a warm atmosphere thanks to the work of Made in Cuba events, a private project led by two young Cuban entrepreneurs.

Dalney Alverdi and Yeni Verrier come from the world of tourism and communication, an ideal mix to make their way in this specialty of organizing events, with all the complexities and magnitude involved in the trade. Accepting the challenge of organizing such a far-reaching evening was a major effort, with barely a year in the market, as both businesswomen confessed when talking with OnCuba.

Did you have any experience in preparing events of this nature?

We had never participated in presidential events, but in several of great magnitude, especially in terms of number of attendees and levels of decoration, our group is very young, but has the force of a hurricane.

Our main market is business and corporate events, we saw an opportunity in that market not so covered by other decoration and design groups, so we got to work.

For the occasion, in the first place we wanted to transmit something very autochthonous and very Cuban, and we coincided with the year of the 500th anniversary of our Havana. Better impossible!

How did you get to organize the evening?

The Meliá Habana Hotel contacted us to work together in this event, we were in charge of decoration and some coordination issues. Working with them was great, they are, without a doubt, the best.

We started researching what the dynamics of royalty dinners look like and we created several design projects based on the chosen space, the Palace of the Captains General.

After countless tests and a thorough selection of all the elements, we arrived at the final result, which you have seen in the photos, with which we are really satisfied.

What design did you think of for the occasion?

It had to be something sober and solemn, very elegant, to give prominence to the place and enhance its greatness. In the centerpieces we used resources such as the light bulbs of the kerosene lamps, but immensely beautiful and full of history, very in tune with the place, surrounded by floral arrangements of white roses in honor of our nation’s friendship with Spain and in pastel tones, with touches of foliage, indispensable green, because we are on our beautiful Caribbean island and had to prove it. The centerpiece was crowned by natural candles to seal the magical atmosphere.

Another of the biggest challenges we faced was to create a 250-square-meter platform in the Palace’s courtyard, because given the passing of the years it is quite irregular and the safety of our guests and the service come first, which is why we dressed in wood for a day the patio where the beautiful sculpture of Christopher Columbus stands.

The other decoration elements such as textiles and furniture, were kept as classic as possible, a lot of white and off-white tones accompanied the rest of the decoration.

Just note that, although we were not in charge of the menu and left it to the best: the Meliá Habana Hotel, we did participate in the tastings.

It has been a challenge very well-received by our entire team, because as we Cubans say, “no one is afraid here, compay.”

The managers of Made in Cuba are aware of what this opportunity means for the private sector on the island.

“I believe that the conditions for entrepreneurship are created, everything is a matter of creativity and effort, this way little by little everything advances,” confess the young businesswomen, who work “day in and day out to defend the good national work because everything, as our brand says, is Made in Cuba!”