The indicator’s general trend on the island barely changes over time and shows resistance to declining. 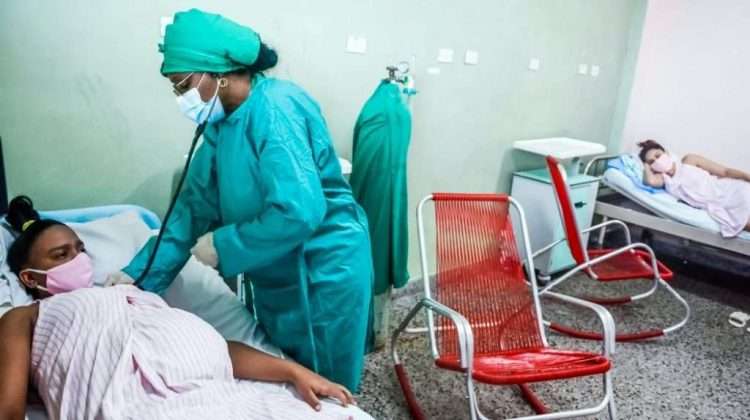 Photo: Taken from the Ministry of Public Health of Cuba.

Cuban Minister of Public Health José Ángel Portal Miranda has expressed it bluntly: the number of maternal deaths in the country in recent years is still far from the desired and even expected results. Specialists agree that the most evident achievements are reached in infant mortality, but the expected effects are not obtained in maternal mortality. The indicator’s general trend on the island barely changes over time.

For researcher Maydeé Vázquez, from the Center for Demographic Studies (CEDEM) of the University of Havana, the indicator progresses slowly and resists entering a process of sustained decline.

Cuba returns to an infant mortality of the last century

The numbers imply non-compliance with one of the Millennium Development Goals (MDG) proposed by the United Nations for 2015 and of which Cuba is a signatory.

The fifth of the goals proposed the reduction by three quarters (75%) of the maternal mortality rate of 1990 in the period 1990-2015; it implied reaching a rate of 10.5 in 2015 based on the reduction of our 1990 statistics (31.6) as was recognized in the Report on Cuba to the 11th Regional Conference on Women in Latin America and the Caribbean of the Economic Commission for Latin America and the Caribbean (ECLAC).

A parenthesis for the 2021 figures

The numbers for 2021 surpassed by a wide margin all the records of the revolutionary period and reversed the historical trend towards stability, even in numbers that are not exactly low.

In 2021, 175 pregnant women died in Cuba. According to official information, 93 of them died due to pneumonia caused by the new coronavirus and other associated complications.

Although Cuba began mass vaccination of pregnant and breast-feeding mothers in July 2021 in an attempt to contain, if not the infection, at least the progression of the disease to critical stages and death, it was not possible to prevent the increase in infections. The months of July, August and September showed the highest peaks of infections in pregnant women and also of deaths.

Throughout the year, 6,947 pregnant and postpartum women were diagnosed with the disease.

More than half of the total deaths were registered due to the spread of COVID-19. In this sense, it is undeniable that the impact of the pandemic contributed to the definitive skyrocketing of the numbers.

However, apart from the increase due to the pandemic, the country recorded 82 maternal deaths from causes that were not related to the coronavirus.

The number was equivalent to a mortality rate of more than 80 per 99,093 live births that Cuba had in the previous year. It is inescapable evidence that, in the context of confronting the pandemic, the stress on the health system was directly reflected on the increase in the death of pregnant women.

Maternal mortality figures above 80 per year have not been reported on the island for 50 years. Among the fundamental causes — not associated with the pandemic — that influenced the increase in the indicator in 2021 were obstetric hemorrhages and sepsis, in the words of the minister of health. Neither of the two causes is new.

At the end of the first semester of the current year, Cuba registered a maternal mortality rate of 34.8, according to the health minister. The decline in numbers puts us back in the pre-pandemic statistical range.

We understand maternal death as the death of a woman while she is pregnant or within 42 days after the end of her pregnancy, due to any cause related to or aggravated by the pregnancy or its management, but not due to accidental or incidental causes. In medical literature, maternal or obstetric deaths are divided into direct and indirect.

During the last two decades, direct causes of death have prevailed in Cuba. Of the 829 maternal deaths that occurred in the period 2005-2018, slightly more than half were due to direct deaths (463), followed by indirect (247) and others (119).

Obstetric hemorrhages, thromboembolic complications and sepsis are highlighted among the main direct causes of death.

These are, basically, causes that result from complications during pregnancy, childbirth and the puerperium; of interventions, omissions, incorrect treatment or a chain of events originating in any of the aforementioned circumstances. These deaths are, according to the definition of experts, preventable.

The importance of reducing the indicator was reflected in one of the Ministry of Public Health’s work objectives for the year 2020. Objective 1.6 of the document set as a goal a direct maternal mortality rate of less than 15 per 100,000 live births.

It was not met. And with that, preventable maternal deaths have contributed the most loss of life to the rate. In the last two decades, the indicator has not been less than 20.

In the case of indirect causes, in Cuba these were basically related to conditions of the circulatory and respiratory systems of pregnant women.

On the other hand, indirect causes of maternal death are understood to be those that result from an existing disease from before the pregnancy or from a disease that evolves during the pregnancy; direct obstetric causes are excluded, and are considered to be aggravated by the physiological effects of pregnancy.

Reducing the numbers of maternal death in Cuba depends on various factors. Within the health system, regarding the maternal infant health program (MIHP), among the main problems identified are the performance of some cadres and management teams and the functioning of the basic work groups in the community setting, their completion and preparation, which do not always manage to be as efficient as required.

Failures in different links of the program’s care chain, from the health area to the management cadres, have been identified as factors that threaten the control of maternal and infant mortality.

Neither are MIHP’s priorities fully met, such as the use of maternity homes; the guarantee of compliance with hygienic-sanitary standards and procedures that condition the appearance of infections associated with medical care, the occurrence of outbreaks and the solution of structural problems in facilities and care services for pregnant women and babies, to name a few.

However, the reduction in figures does not only depend on the health system. In the Cuban scenario, in addition to the clinical causes, there are social determinants that generate and aggravate the resistance to the decrease in maternal mortality in Cuba.

The historically inherited social asymmetries, as well as the unresolved disadvantages weigh on the maternal survival variable, according to Professor Juan Carlos Albizu-Campos, from the Center for the Study of the Cuban Economy of the University of Havana, whose study shows that there is greater premature mortality in racialized women than in the rest and, therefore, greater loss of survival capacity in the event of complications during pregnancy, childbirth or the puerperium.

Confronting the problem on the island, in the words of the researcher, requires paying even greater attention to social and economic factors that are prejudicial to women and deteriorate their health.

In this sense, as defined by Dr. Evelio Cabezas, to reduce the numbers, coordinated action is needed from the cultural, social, economic, political environment and the health system. In individual terms, the responsibility of each pregnant woman counts; and can definitely tip the scales.

An ever-decreasing maternal mortality is achieved life by life. We have achieved a lot, but the most difficult challenge remains: breaking the inertia. Maternal deaths can and should be prevented.