I heard that Our Lady of Charity was also Oshún, and Cachita, the Mambí Virgin. I thought if she was all those names, she could also be my mother. And that of many more. 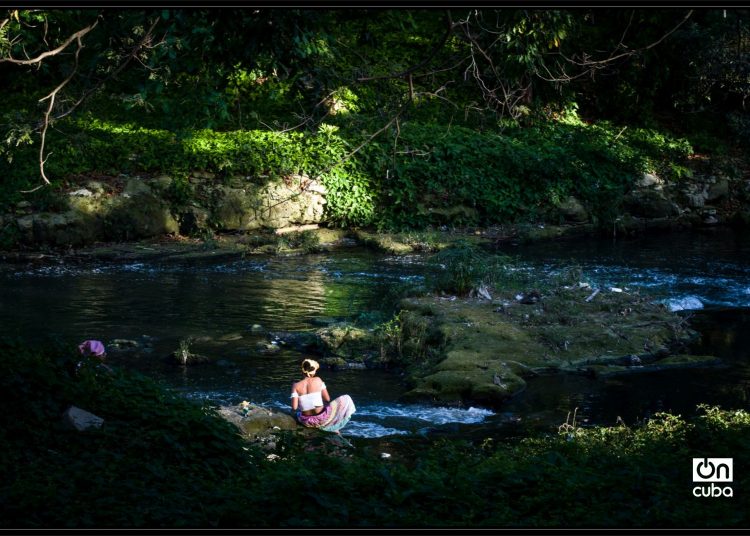 The first time my mother entrusted me to Our Lady of Charity, I was still in her womb. She asked her to protect me, that I be healthy and lucky.

Protection—according to her—was not long in coming. She came the same day I was born: they took me out with forceps, and she, a 27-year-old new mother, checked me from head to foot as soon as she had me in her arms, and she breathed relieved. I had no malformations. Several people had told her horror stories and mysteries about the complexities of childbirth and how forceps could ruin a life.

The wish for health, she tells me, was also fulfilled. I wasn’t a sick girl. My parents didn’t have to take care of me in a hospital. Except for pharyngitis and a heart murmur, I can claim my only visit to the doctor’s has been for routine check-ups or allege in self-defense that I would pass out at the next blood test.

My mother says I’m a lucky person, that everything works out for me. And to support it, she says I was born in September. Two days after the 8th, which is the day of Our Lady of Charity. No one can counter that argument of my mother: not philosophers, not sociologists, not psychologists…. Nobody.

When I decided to go study in Mexico, my mother again entrusted me to Our Lady of Charity. She sat on a bench in the Church of Buen Viaje and asked her to watch over me, since she couldn’t do it personally.

This is how one mother stayed in Cuba, taking care of my brother, and the other left with me. At least that’s what my mother thinks, and the very idea calmed her.

After two and a half years in Mexico, an earthquake, another trip—this time improvised—and a new country, my mother still lights a candle to Our Lady of Charity, because of course, she gave her the honorable mission of taking care of me. And the life of a daughter is not entrusted to just anyone. Everything points, she tells me, that he is fulfilling it.

My family can be classified as a non-practicing Catholic. That is, they don’t go to mass every Sunday, but they give me a small picture of Our Lady to keep in my wallet, they took me on a pilgrimage on September 8 or to the Sanctuary of El Cobre.

In El Cobre it was precisely where I heard that Our Lady of Charity was also Oshún. Or Cachita, the Mambí Virgin. I thought if she was all those names, she could also be my mother. And that of many more.

I don’t remember the first time I went to the Hermitage. It was not one of the first places I visited when I arrived in Miami. But I particularly remember one time I was there.

My best friend’s aunt had just died. She died of cancer, in Camagüey, and she could not travel immediately. When someone we love dies and we are so far away, the closest we are to Cuba is in a place by the sea. That’s why I told her I was accompanying her. Without speaking. Without even noticing that I was there. I accompanied her to the Hermitage because she wanted to sit down and cry and there is no better place to cry than a place where you feel less helpless.

The last time I traveled to the island, I went with my mother to church. It was not something planned: we passed by and entered. I don’t know what my mother asked or gave thanks for. I only knew about the moment she looked at me and my tears also came out to say hello.

The first time my mother entrusted me to Our Lady of Charity, I was in her womb. Now, almost 33 years later, sitting there, I was entrusting my family to her. I suppose that Our Lady of Charity is a bit of that: the maternal image of the reunion, the possibility of another hug, the desire to sit by the sea and look at Cuba. To cry. Or not.