Because of the breakdown, “the emergency lines that provided the supply service to the districts affected by the fuel contamination were removed” last week, which had already caused readjustments in the distribution of drinking water in the Cuban capital. 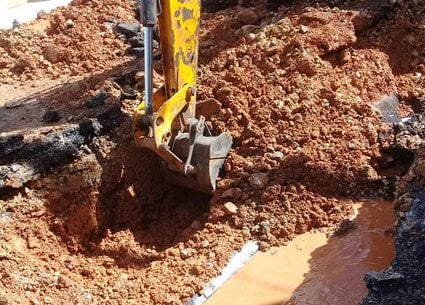 A new breakdown of a drinking water pipe in Havana is currently “slowing down” the supply service to several areas of the city, which has increased the affectations to the population and the state entities previously damaged by a fuel leak.

Because of the breakdown this Sunday in one of the pipes of the El Gato source, “the emergency lines that provided the supply service to the districts affected by the fuel contamination were removed,” Granma newspaper reported, citing an official statement from the Aguas de La Habana enterprise, which said that for this reason “the critical points of these districts remain affected.”

The breakdown of pipe 42 of said source “caused that supply be urgently cut off to the Sevilleno and Naranjito districts, as well as to part of Vista Alegre and Lawton, affected since last Wednesday by a leak of turbo fuel” in the waters of the Vento canal, “which contribute to the central system of the municipalities of Plaza de la Revolución, 10 de Octubre, Centro Habana, Old Havana and Cerro,” Granma specified.

As part of the affectations, the water service was also cut from the morning hours to the Nuevo Vedado and Puentes Grandes districts, “due to the low water levels in the Palatino tanks, and with a view to guaranteeing the supply to the hospitals around the Loma del Príncipe,” adds the enterprise’s note.

As a result of the first breakdown, which occurred in the pipe that takes turbo fuel to José Martí International Airport, Aguas de La Habana brigades and the Unión Cubapetróleo (Cupet) worked not only in the solution of the leak but also in the cleaning of the canal and cisterns that were contaminated.

Leonel Díaz, general director of Aguas de La Habana, last weekend explained to the local press that the definitive solution was “very complex,” because it implied “not only the removal of the leak in the pipeline,” but also “taking out and replacing the contaminated soil that serves as filling for the canal itself, with the purpose of avoiding new contamination after the reestablishment of the pumping.”

In addition, he said that “as soon as the affectation was known―whose focus was the patio of the Basic Provincial Electric Organization, in the Capdevila area―the pumping was stopped,” and consequently, even though this system supplies several municipalities from the center of the city, “the damage was fundamentally appreciated in part of 10 de Octubre and Guanabacoa.”

However, neighbors from other affected areas claim to have received contaminated water in their homes.

Díaz also affirmed that the distribution service had been readjusted, to deliver water “both by cistern trucks and pipes,” which is “of the best quality and is suitable for consumption.”

On Monday, Cuban Deputy Prime Minister Inés María Chapman wrote on Twitter that work was being carried out “day and night” on “the recovery in the water supply” to Havana, that there was “follow-up on the actions in each place” and “the repair of the pipe for the transfer of fuel and the total cleaning of the Vento canal” had been carried out.

However, Aguas de La Habana reported on Monday that “due to the complexity of the decontamination and repair work on the Vento canal,” it was necessary to “extend the adjustment measures in water distribution schedules in order to continue providing the service to the population with the least possible affectation,” which is why part of the population of the city was going to pass to a water distribution cycle every third day.

The enterprise has affirmed in its notes that “once the cleaning and repair works of the Vento canal have been completed, the water service cycles to these areas will be gradually restored to normal hours,” while at the same time urging the population and state entities affected by these breakdowns to take “all the necessary saving measures in order to minimize the affectations.”

As part of the affectations, the department of institutional communication of Aguas de La Habana said that in the municipality of Plaza de la Revolución it was necessary to stop the water service from 9:30 a.m. to the Nuevo Vedado and Puentes Grandes districts due to the low water levels in the Palatino tanks, and with a view to guaranteeing the supply to the hospitals around the Loma del Príncipe.