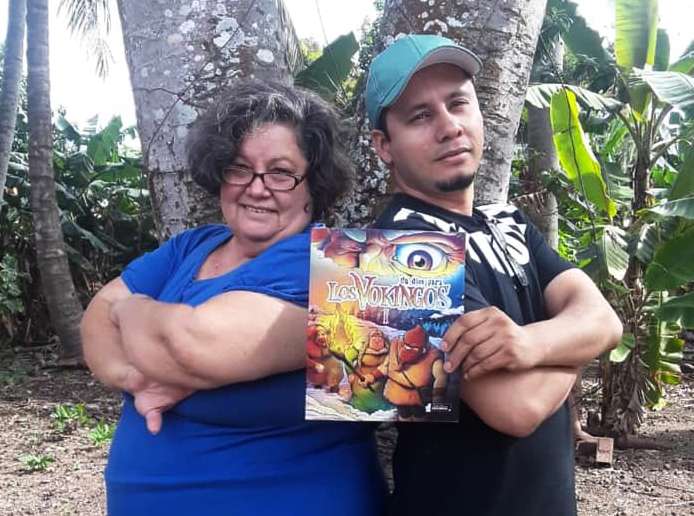 On the island of Hambremucha, located in the cold Nordic seas, live the Vokingos, who are known for their absolute cowardice. Their best defense against the arrival of enemies is to run away. Such behavior shames the gods of Valhalla; but one of them must obey the order of Odin and assume the needs and hardships of the people to help them change.

This summary of the comic strip Un dios para los vokingos (A God for the Vokingos; volume I) is the prelude to get to know the prolific playwright and storyteller from Camagüey, Niurki Pérez García, who gave life to such extravagant characters. Considered “one of the most remarkable talents among Cuban writers for children,” as well as winner, among many others, of two Caracol awards for the radio scripts of Las aventuras de Lily Rosquita y Joe Remolacha, and Las aventuras de Li Chan Pú, El gran detective chino, she has ventured into the writing of comic book scripts, when in our country the ninth art is at a total disadvantage compared to literature.

When I graduated in 1982 I thought playwriting was too cumbersome a business for me to ever pursue it. And as you can see, for years I have been feeding my family by writing radio scripts and in the end I felt I was ready to do a comic book script. In Cuba comic scripts are not considered literature. But is so not only with the comic script, it also happens with scripts in general. In comic scripts, in addition, there is the restricted field of development and the even more restricted field of publication. It might seem absurd that at this point in my life and with a career behind me, I would get involved in a subject that belongs to people who have reached maturity in those fields, but the only one who has written about cowards is me, and it is called Los vokingos.

The change from i to o is obviously satirical.

Yes, it has a satirical origin. I was watching TV with my daughter, there were movie promos on and I saw that The Vikings was on. I am a movie buff and very observant. That’s why where no one saw, I saw that the sign said vokingos. I thought it was a mistake that would be fixed later; but no, in between shows it went on. Must be some different kind of Viking, I thought to myself, cowardly Vikings, who survive by running in front of their enemies. Who says television is not inspiring?

Los vokingos first appeared as a radio series in the summer of 2015 in a program that listeners used to call Los muñequitos de Cadena Agramonte, when the space was officially called Mundo en vacaciones. It was a humorous adventure for children, but listened to by all kinds of people, who claimed visuality in what they heard. Years before, a student of plastic arts of the Higher Institute of Art, because of the same experience as a listener, had contacted me because he had the project of turning my series of Las Aventuras de Li Chan Pú, El gran detective chino, into a comic or animated cartoon. Seeing that Los vokingos had the same characteristic, I decided to write the comic book script.

Did you do the script without knowing who would be interested in drawing it?

I even write scripts for fun, many of them stay in my drawers. But I have so much fun…. I talked about the project in many places. Through Sandra González Cuenca, the cartoonist Ledi Sanregré Pelegrín (Ledisán) contacted me. I had seen the final art of his comic book Fin de año (Editorial Ácana). He wanted a scriptwriter and Sandra told him about me. He was interested and started drawing the characters of Los vokingos.

Around that time (2017) I was teaching a playwriting workshop at the Jornadas ArteComic to a group of cartoonists, I brought scripts of mine and of Noel Silva González. No one was interested in either as a class assignment. But Ramón Ochoa wanted to talk about Los vokingos, and since Ledi already had it, I said no. I was not interested. However, knowing that this is not one’s job, we added it to the equation and it was Ramón who designed a promotional system that we placed in different places. He was the colorist for the first cover and the first pages of the work, which were printed for display. We became a very industrious team.

Was it easy to adapt the radio script to that of the comic book?

By reading the scripts, you would see that they not only work as texts for comics, but also as a script for an animated cartoon. Even when I do literature, the story is visual. I grew up with movies, television, movie-books and comics. There was a lot and plenty of it. From Superman, Mandrake el mago, La pequeña Lulú, Elpidio Valdés, Aventuras de Pixie y Dixie, Snoopy, Strawberry Shortcake’s, Palante, DDT, I adored the Gugulandia page, Adventuras de Chamaco…and above all, radio. I listened to a lot of radio.

The process was simple: I made a copy of the scripts, then I removed all the radio technical signs.  I converted the narrator’s texts into the text of the “cartridges” and into descriptions of the characters’ actions. Under no circumstances do I limit myself to describing the interior of a vignette, the one who draws is the one who suggests how it is organized and even if I put a little on the storyboard, I am respectful with the cartoonist. I give a lot of importance to listening to the other.

So the work between you and Ledisán went smoothly?

Ledi also listens attentively, because beyond the enthusiasm of the story is his interest in perceiving what the scriptwriter saw and he complements it with his own ideas, capable of giving depth or adding details to the work. We may not agree on some topics, but we are united by our love for comics. We are united by the dream of being able to publish everything we do and even have an animation studio.

You have already broken the ice because Un dios para los vokingos has its first volume. How did you manage to publish it?

In 2018 Sandra González Cuenca called us to D’McPherson Editorial because she had developed a kind of faith in the project, that’s how we reached an international publisher. They took a risk for us. I speak of risk because it is no secret that the world of comics is monopolized by the big companies and the promotions are worth millions. Almost no one takes comic book publishing seriously. We had a lot of support from Odalis Calderín, its current director, and from editor Mayelín Portales. The key is the word work. I think it’s every artist’s dream come true: to work in what you love and make the talent you were born with grow.

Are more vokingos in the making?

The second volume is finished in its entirety. The script for the third was delivered, then came the pandemic. So far there are ten scripts. It would be great to bring them all to completion. I’ve already told you that I even write for fun, and as long as what I do makes me have fun and makes the wonderful working relationship that this work has generated grow, I’ll keep on doing it.