Now Rainier only has to carry his baby girl, tenderly embrace her smallness, look at her over a piece of cloth, for his whole life to make sense. 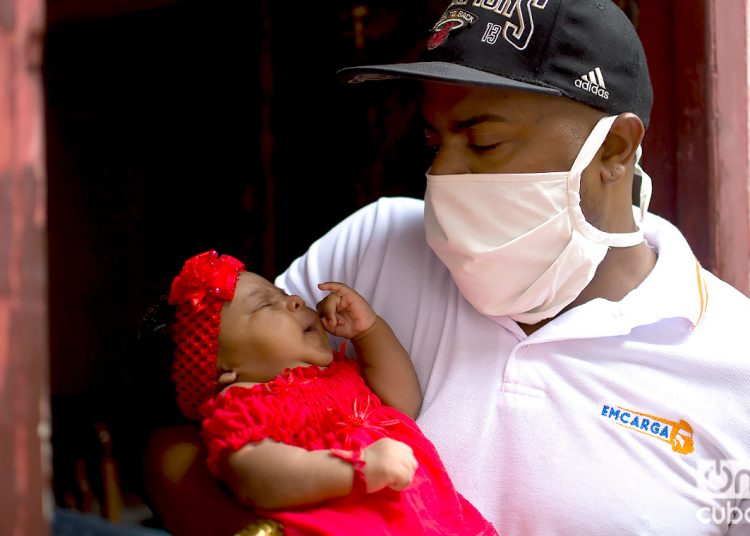 Amber doesn’t know why Rainier looks at her over a piece of cloth, or why that cloth stands between their faces and her father’s words collide with the cloth, and they become strange for her. She also doesn’t know why when he comes home from work, or from the street, he first goes to take off his clothes and bathe to leave behind any dirt from the outside world, before hugging and kissing her as any father would like to do.

She doesn’t know and can’t ask him, at least not in words, although sometimes she opens her curious baby eyes wide and Rainier thinks he sees more than one question in them. Those questions that also distress him and that he tries to answer silently, between one hug and another, when he finally knows that he is clean, sure that he won’t infect his daughter with the coronavirus or any other illness that he may have accidentally picked up in his hands.

Ámbar was born a month ago, just a month ago, in a Havana that became the epicenter of COVID-19 in Cuba; in a city that 30 days after her birth continues to report positive cases, many of them asymptomatic, and in which the virus continues to lurk despite the measures and warnings of the authorities and that almost the entire country has started a progressive return to normality.

Rainier is a grocery store assistant, so he is in contact with many people every day. People who go shopping, who pass by and say hello, who ask about what’s come in, who complain and get upset or joke, and who he tries to keep at a distance even when it is difficult due to the characteristics of his work. Before, having slightly touched a neighbor, touching a customer’s bag wouldn’t have mattered, but now it’s different. Now he hardly thinks about himself anymore. His biggest daily concern is Ámbar’s health, her happiness.

When he and his wife Yamisleidys learned that they would have a baby, life changed completely. That common place, very certain in the experience of every father, gained, for the worse, another dimension, when months later they understood that Ámbar would be born in the midst of the pandemic. This, however, did not erase the joy. “This is so big you don’t know whether to cry or laugh,” he says.

Since then, to the natural desire that the baby not lack what is necessary, that she be healthy and well fed, the anxiety that she not get sick, keeping her safe from the coronavirus, being extremely careful with hygiene, being attentive to each daily report, to each explanation or news about children and COVID-19, about the symptoms and risks of that dangerous enemy, all this has been added to the sleepless nights.

“We can’t make a mistake,” says the father. “It would be unforgivable.”

But Rainier not only thinks and stays awake for the present. He also cares about the future.

“Like every parent, I wish the best for her. That she is better than me and her mother in all aspects. We’ll try to make her a well-mannered and educated person, cultivating in her the best human values,” he explains. “I think about how complex and hard life is, but it has to be faced with courage. So I want to be a guide, a trustworthy person, a friend for Ámbar.”

Now, however, all this is far away. All concerns for the future are a distant cloud on the horizon. Now Rainier only has to carry his baby girl, tenderly embrace her smallness, look at her over a piece of cloth, for his whole life to make sense. And although Ámbar doesn’t answer him with words, nor does she know why her father does what he does to protect her, it’s enough for him that she half-close her eyes and yawn, or return her innocent gaze, and any fear will vanish.

For the first time, Cuba registers a child with two mothers