In love with an a “endangered” trade 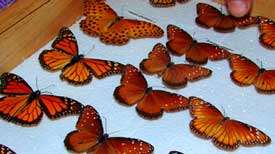 There are a thousand butterflies in the house of Claudio Brown Jacobo, a biologist and taxidermist from easternmost Guantanamo province Guantanamo. They are still, in entomological boxes that protect them with naphthalene from pests and with a glass from curious hands. Many of them, almost 30 years ago, stopped flying around the gardens of the city or the mountains of the province.

Insects, especially these, are the scientific passion of Claudio. Taxidermy, his specialty, which in Cuba is almost as rare as some species and that, for this scientist, is “endangered”, is based on the capture and preservation of species which are later dissected giving them back the appearance of living and further facilitating exhibition and study.

His works are part of the collections exhibited at the Flora and Fauna rooms of the museums of the city of Guantánamo, Baracoa and Caimanera. Although it would be hard by only seeing his butterflies for citizens unfamiliar with these tasks to imagine the high doses of perseverance, patience and passion taxidermy needs.

“The mountainous terrain and our rainfall pattern is a haven for them, but I also work with other animals. I have an unfinished collection of wild ducks, which I hunt when the provincial Heritage and the Ministry of Science, Technology and Environment (CITMA) authorizes me, “explains Brown.

In Cuba, the Environmental Law 81 dictates, in Article 87, that only CITMA sets the conditions, restricts or prohibits hunting or export of species that may affect with its disappearance the national biodiversity conservation, or are subject to international regulations or included in the “Red Book” of endangered animals.

He started his butterfly collection in 1983-he says-because those are the most beautiful insects in the world and can be gruesome and angelic at the same time. In the larval stage, he explains, they devastate cane or cassava plantations, and when they become adult they pollinate crops.

“Out of the 195 species of butterflies reported on the island, 135 are represented in Guantanamo and of those I have some thousand specimens,” says the scientist.

He hunts them gently with a net, lest they become dust in his hands, then using some presses he dissects them and waits two or three days to complete the process. Finally, to distinguish them, he exhibits them by families and with the names of each, differentiating between females and males.

Over seven species of butterflies, strange and so far unnamed, which appeared in the territory after the Haiti earthquake in 2010, make up the collection.
“I have also some of the rarest of Cuba, including the Atlantea Perese, native to the forests of Baracoa and donated to the provincial museum. I also have a specimen of the very surly Arystoemus, which I caught in the 1980s and I’ve never seen it again. ”

The collector has also in his showcase other native species, but strange to see in the area. Such is the case of two Eurytides Celadon, priceless, beautiful, caught one in the Guantanamo community of Costa Rica, and another in that of Hatibonico.

They all are stored in a room in his house, small, tight; he calls it “butterfly room”. On the walls hang the few entomological boxes that fit on the walls, the others for lack of space have gone to an enormous drawer above a cupboard.

The art of dissecting

The taxidermist refers that his job is not easy and involves many risks in irresponsible hands. So he warns, stuffed animals can not be sold. Their marketing is prohibited and anyone violating this regulation runs the risk of ending behind bars.

He then speaks of the difficult particularities of his craft.

“When I go out to catch I do it alone or I use hunters, because some of them are hard to catch as migratory ducks that are thrown in the middle of the dam, or hawks, parrots, the cateyes. They need a trained eye to take a shot from more than 30 meters.

“Usually I have to wait several hours until the animal shows up, or calculate the times they usually eat. You have to know their habits, be observant, and be careful not to destroy the piece when you hunt it, ” he says.

When he returns home, sometimes after 20 days in the mountains, the taxidermist starts, right there in his yard, the dissecting. For that purposes he uses presses, chemicals (sodium tetromorato, formaldehyde, naphthalene and insecticides) and tanning powder (potassium alum, arsenic, and copper sulfate).

The process, which can take a full day for mammals or three hours for insects, is as follows: an incision is made on the abdomen through which muscles and bones are removed; the skin liberated is worked with powders and the artificial body is manufactured with wires which is later introduced inside the skin.

Then that is sewn and respecting the characteristics of the animal, he gives it form and expression he deems right or as asked by the scientific institutions interested in the piece.

“It is a craft that has gone extinct. However, only taxidermy allows young people to know species of the country and other regions.

“Can you imagine what would happen to that knowledge if, for example, a pair of Carpenter Real-endangered bird- wasn’t conserved in the Tomas Romay Museum in Santiago de Cuba? How can you prove they actually existed? Brown wonders, sure that his butterflies and birds, could persist, behind glass and in the right place, for ever and ever.

Polito Ibáñez amidst Poems and Songs