Polito Ibáñez amidst Poems and Songs 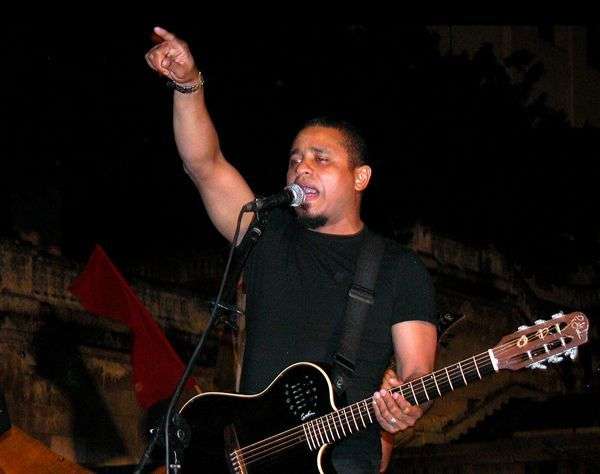 Poetry contains a subtle spell that charms thousands, that transports them to another world where sadness and suffering disappear. But can you imagine what it would be like to combine poetry with music and turn it into a song?

That is what it is about in the new proposal of Cuban singer-composer Polito Ibáñez when he conceived a series of concerts after recording his most recent phonographic production entitled Ante tus ojos (Before Your Eyes), where he “pays tribute to the poets and poetesses who have reached my soul with their poems”, he explained.

Interesting about the album is not only the setting to music of poems by great authors like Roberto Fernández Retamar, Marilyn Bobes, Nancy Morejón, Carilda Oliver Labra, Miguel Barnet and Reynaldo González, among others, but the symphonic concept of that setting to music with the National Symphonic Orchestra conducted by maestro Enrique Pérez Mesa.

He chose a very peculiar form to promote it… Each month he will honor two poets at a literary gathering in the theater hall of the National Museum of Fine Arts. The poets will read several of their works, always followed by a concert by the troubadour that will end with the poems put to music by the guest writers.

The author of very famous themes such as Sombras amarillas and Piercing de amor emphasized on the importance of this album for the renewal and rescue of poetry, which connects with music as bridge and opening in the face of the whirl of vulgarity that currently floods the scene of both Cuban and foreign music genres.

The CD’s official presentation, signed by the Colibrí seal, is foreseen for February 2013 during the celebration of the International Book Fair of Havana, with a big concert at Karl Marx Theater.

The Cuban National Ballet gets ready…

The Cuban National Ballet gets ready...

Robeisy Ramirez: "... victory, that’s what I always go for"