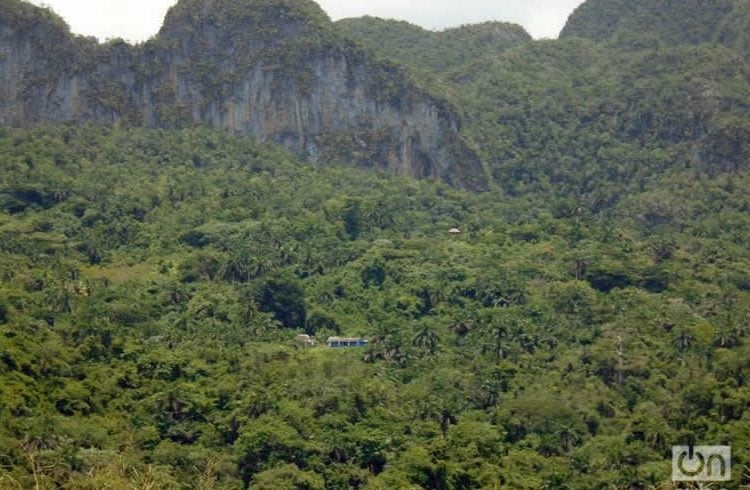 In the Sierra del Infierno mountains in Pinar del Rio there are only two “acuatic” families left Foto: Ronald Suárez

The man in front of me doesn’t legally exist. You wouldn’t be able to find any record of his birth or any other episode in his life at the civil registry.

But Emerito Rodriguez Mosegui is as real as the mountains where we are now conversing.

If he’s never agreed to carry any official documents or be registered in any of them, that is because this is what his faith demands, a belief system that does not acknowledge the institutions created by men and reveres only God and water.

Emerito is an “aquatic,” and, to date, he has helped sustain one of the most unique legends in Cuba.

At 85, he’s never gone to a doctor or taken any medications. Like all who have embraced his beliefs, he claims he is capable of overcoming all health problems with water alone.

Lucid and active, with a complete set of teeth (even though he’s never set foot at a dentist’s office), he appears to be the living proof of the effectiveness of this rare form of therapy.

The only indication that something may not be entirely well in his organism is a white stain on his head and part of his chest, something resembling vitiligo. But, in someone who is past 80 and continues to work in the countryside, it is ultimately insignificant.

“I’ve never been a sickly person. Only once, when I was a kid, I spent 20 days without eating with a fever, but later that passed,” he said.

His family had already embraced the faith, after meeting Atoñica Izquierdo, a peasant from the mountains of the San Felipe keys, in Viñales, who had become a healer.

“One of her kids bécame seriously ill one day. In her despair, Antoñica Heard the voice of the Virgen Mary, who told her to bathe the child in the stream. She did, and the child began to get better, until he was cured.”

“People immediately started saying there was a woman who could heal with water, and people started flocking there from everywhere,” Emerito tells us.

New miracles would continue to feed the legend. On the other side of the mountain range, where his family lived, Emerito recalls that another child, Bernardo Cuevas, also bécame very ill. “The father, Vicente, was a wealthy man and he took just about every doctor there, but all of them told him there was no cure for the child.”

As a last resort, a nephew suggested he consult with the healer at the keys.

“Vicente agreed and sent someone on horseback, who came back with a bottle of water and Antoñica’s indications, which consisted in giving the child three spoonfulls of water. The child took the water and, a short while later, he was already on his feet.”

Countless stories like this one have survived the passage of time, though there are those who insist the baths and prayers weren’t always effective, and that some of the ill were faking their recovery.”

Ricardo Alberto Alvarez, a historian from the municipality of Viñales, explains that, in order to understand this phenomenon, one has to understand the context. “Illiteracy, obscurantism. It was the 1930s, a full-blown economic crisis was underway. Viñales only had two doctors. There wasn’t even a road in Cayos de San Felipe.”

Such conditions led an obscure character from Pinar del Rio, known as Tony Guaracha, to see a business opportunity in the healer from Cayos.

“He started paying people to fake illnesses and, after Antoñica saw them, to say they had been healed.”

“This made her become so famous that even she started believing she was a miracle worker.”

Her fame began to affect the interests of medical doctors and pharmacists.

“They started losing customers one by one. People barely went to see them, so they started saying she was mad. They took her to trial and had her committed,” Emerito comments.

Historians, however, are of the opinion that burning her voter’s ID and declaring that people in the countryside should not become involved in politics was what sealed her fate.

“Someone who was running for senator had asked for her vote and all of her followers for the coming elections, and that reply from Antoñica, the year in which women were going to exercise the right to vote for the first time, doomed her,” Ricardo explains.

“They dumped a dead man near her house and said he had died because of her spiritualist practices. At a trial with phony witnesses, they accused her of being insane and sent her to a psychiatric hospital.”

They say something similar happened to Emerito and his lot.

After following Antoñica’s suggestion to burn their voter IDs and refuse to vote, all were evicted from the lands they were living on in El Rosario in 1942.

Refusing to give up their faith, a total of 13 families sought refuge at the Sierra del Infierno, a place as beautiful as it was recondite (a place that is hard to access even today), located between mountain paths.

There, they set up one of the few communities of “aquatics” that would survive the miracle healer of Cayos.

“They had to large trees to build their homes,” Emerito recalls, stretching his arms as far as he can.

“We worked the land and whatever was available, for instance, I worked many years cutting pine trees. Besides stealing, we’ve done everything.”

He says the “aquatics” are humble and merry folk. “What I liked most in the world were parties. There wasn’t a single dance I didn’t go to in this entire area.” The only difference between them and other people is their decision to forego identity documents or participate in the electoral process, not go to school and (most of all) the doctor.

Seventy-three years after being forced to leave town for refusing to give up their faith, Emerito Rodriguez Mesogui continues to treat all his health problems with water.

The water need not come from any specific place. It need only be clean water administered in uneven rations (spoonfulls, jars, buckets), he explains.

He acknowledges, however, that the number of people who share this belief is dwindling.

Of the 26 families who once lived at the Sierra del Infierno, only 2 remain. “Some have died, others have left this,” he says.

In fact, no few people claim that those who maintain the tradition do so to attract tourists.

According to historian Manuel Correa, this is because the conditions that gave rise to the “aquatics” have disappeared and contact with civilization has since grown.

“Today there are doctors across these mountains. They’ve installed solar panels that allow people to watch television and know other realities. They are also visited by tourists from around the world.”

It is also said that water treatments haven’t always been effective, particularly with people who suffered burns or pneumonia, or pregnant women who had labor complications, people who have died while praying and applying presses and purifying baths.

“This has led people to migrate to the city en masse. The children and grandchildren began to go to school and have even become technicians and engineers,” Manuel points out.

With the resignation of someone who acknowledges that the times have changed, Emerito adds that the “aquatics” have never tried to pressure anyone to accept their faith.

“This is something very personal, an individual faith. If one of my sons tells me they’re going to go see a doctor tomorrow, I’m not going to stand in their way.”

“But I’ve always lived this way and I’ll continue to the last of my days, because, when it’s time for you to die, no one can help you.”