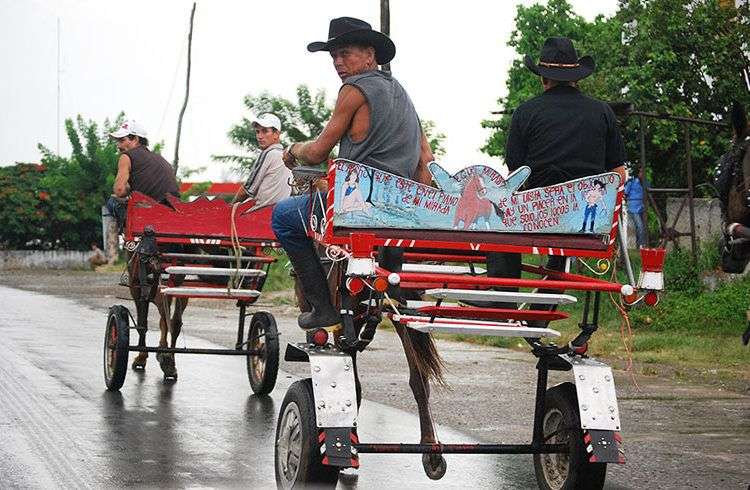 There was five years ago in Güira de Melena town, in Mayabeque province, a memorable funeral. The Express, a golden horse that never lost a race or money to its owner or those betting on him, died at the end of the finish line. He was buried, with procession, flowers, tears and snot, on the grounds of its owner.

That last time, The Express ran against his contender for half a million pesos ($ 20,000). As usual, before the race, the owner had gotten “on the side” some stimulant drugs in a State pharmacy, so that the horse was as fast as possible. But this time he went too far with the doping, and lost one of his major sources of cash.

J tells me this, a big fan of betting on horse races, who lives in Melena del Sur (also Mayabeque). He has never been able to buy a horse, but the times of year when they will run and bets are made, he goes anywhere, and makes home recordings that then he jealously guards.

The videos J shows me are on betting with horses pulling small carts to which they are called “spiders” or “spider” in countryside villages. As in the case of El Expreso, in the form of horse racing also gamble on riding on horseback with no saddle, in which a man of medium height and light bodyweight rides a horse on an even embankment and races another horseman.

In these videos of horses with “spider” that J keeps, you see bidders on motorcycles and cars filming the race, to make sure who the winner is and monitor the horse they like. The races and bets are made on the outskirts of towns, and highways where there is little traffic and almost no police. Eight Ways, in the stretch from Havana to Pinar del Río, is one of the most used.

A “spider” is constructed relatively easy. According to J., “motorcycle wheels, a couple of plastic chairs those people steal from schools and light hooks so wind won’t get stuck and the horse can move forward.”

So the horses, as those who follow them from a car can see, can reach more than 40 kilometers per hour in sections which can vary from approximately five to twenty kilometers.

The amounts J has bet are minimal compared to what people can bet in a race. He says they can be highly variable, depending on what everyone wants. He has lost and gained little. But many of his friends or people he knows have lost and won thousands of dollars.

It shows that those who follow in motorcycle and auto are people who have money, if not a lot. There has always been the common wisdom that the countryside people are people with money. While that’s not always true, most of those in the field have motorcycles, cars, petrol to chase horses running for miles and miles.

J and I watch the videos together and he explains them. The last of the races that he shows me is between a horse named Dorao and another called Chivo, off Melena del Sur.

The video is a recording made with a cell phone. Although the faces of the riders are indistinguishable, and the horses are pretty fast, you can very clearly distinguish small whitewashed concrete walls on the roadside where the village begins.

On the side of those little walls, which I know by heart, “spiders” fly by that are close to the goal, in which the money will be distributed.

Home Video donated by its owner

This race of spiders took place on Cuban roads and ended at the edge of town, where all the people gathered. Bets are made clandestinely.

US extends Cuban embargo for another year