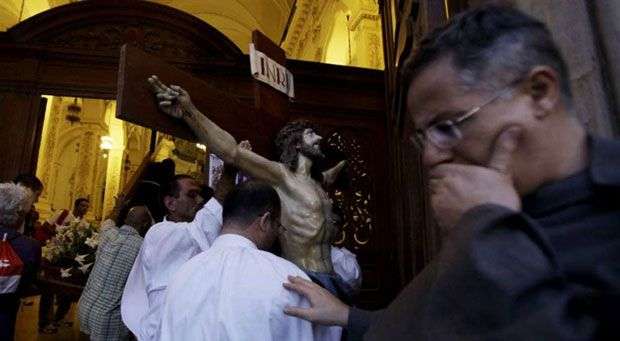 I Googled “Easter and Cuba” and I came across this: ….. (that is), metaphorically with nothingness. It had happened to me before, it happens to everyone. I remember once I Googled my girlfriend’s name, strange, and the effect was the same: a hollow, metaphorically. There is something provocative, even eloquent, from making the world’s best search engine veer with hands up, to no avail. The literal truth, however, is that Google does not return empty-handed, as seen above. Google never returns with a void, the minimum is a no literary sign that reads “Your search did not match any documents”, or something even less literary, impossible to remember.

Just to save time, I will tell the story as it happened. When I Googled “Easter and Cuba” I found two pages “not found”, a text about how Trinidad city remembers the Via Crucis and then precisely one click  on Via Crucis, took me to a site where I read, embarrassed, the figure of 110 000 Catholics in Cuba. Until that click of my life, I had had the impression that my country was crowded with Catholics, which made me assume that now, with Easter, the number of these would be around some millions, leaving almost no chance to Santeria and Judaism, even less to reiki, parapsychology and the water cure, not to mention zero option for skeptics and ungodly.

Before knowing the Franciscan figure, I had imagined another Easter. Without going to the extreme, I dreamt of huge processions, similar to those that occurred on the occasion of the Virgin but without the town scandal. However, I forgot two essential things. First, the most widespread in Cuba of Easter, an idea perhaps inherited from the Spanish popular Catholicism, was relating Easter with recollection, even to sadness, therefore no crowds were expected and least of all the fanfare last November, when the faithful Virgin dragged along pagans, curious and state agents. Second: the syncretism around the Virgin has its own laws, its reverse mechanics. The technique of believing in Her requires an unfathomable, flexible procedure, then it can be no quarrel with the worshiping of Ifa, Martin Luther King and Rosa Luxemburg.

But not only in opposition to the symbolism of the Virgin, to its popular fiber, I can explain the shock, the Jubilee zero, the social irrelevance of the Easter. Despite the political and governmental “relaunching”, the discrete period that just ended, was barely mentioned by the national media.

Besides the lonely transmission of the Via Crucis from the Vatican, and the words of Jaime Ortega, archbishop of Havana, the media gave no coverage to the religious week. Laymen as they are, they just “skipped it.” On Good Friday, the Cuban TV Newsreel praised the opening of a photo exhibition in San Francisco, the creation of a factory to produce ecological cement in Sancti Spiritus and student protests in Chile for reforms in education.

Granma did not say the cause for Good Friday to be off. Who would excommunicate it? The next day, as if to apologize for having a navel, Granma scourged. It seems so obvious that the duty is secular, that modernity doesn’t only speak for us, but thinks.

With all its ostracism, Easter today you may be closer than ever to the new man, at least as a socio-religious sense. Logical, the 1940s and 50s were other thing. Then the schools closed from Thursday until Saturday. Even some would reopen until Monday after Easter Sunday. Not that we should follow it to the letter, the contents of these rituals, the abandonment of work.

Can you imagine? “Interrupted the application of the Guidelines in connection with the representation, by La Colmenita of the Jesus stations, concludes the note.” Of course not. But we should know that we come from something, we are not pollen, there was a time when superstition was very much alive in people and sweep the house, something so helpless, was postponed because ants would come, and that our core, on Holy Thursday, closed to open multiple processions, disinterested in that reverse mechanics game that faith is. We must know that we are nothing, literally, without faith.