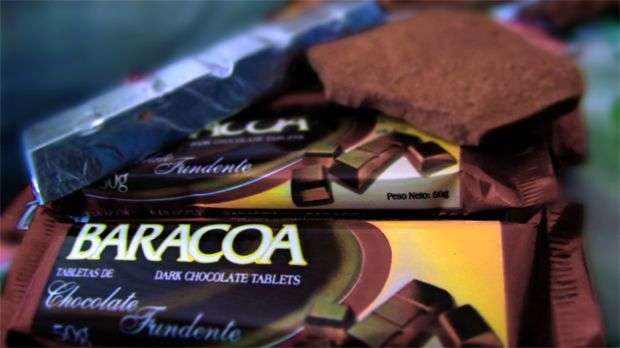 Chocolate bars, one of the most precious treasures of Baracoa factory/ Picture: Adriana Rodríguez Vives

In Baracoa, the simple act of walking is a tremendous pleasure, you could even withstand the adventure of walking on foot across the city in just one day. Steep streets, steep descents, bike dances, trucks ready to juggle in La Farola, an abandoned stadium to the east, the Yunque to the West, a museum in the depths of a cave, the “gringos” floating around every corner … that is Baracoa

In Baracoa, almost everyone seems to know each other. It is not a cold city or of empty stares. There, a smile is answered with a kiss or a bag of coconut, of course, always after showing the money first .

In Baracoa you awake with aromas, especially of cheap pizzas in all streets and then throughout the day, you feel the fragrance of “Bacán” or “Teti” traditional dishes based on fish, which are mysteriously unavailable to the vast majority of its inhabitants.

In Baracoa, there is also a narrow road, almost lost in the map, whose destination is uncertain when you start to go through it. At the beginning everything is green, later coconuts appear on the left and a few meters after the processed coconut fragrance lift you literally from the ground.

When you travel through this zigzag line you can see many trees, short, so short that you can pick up the fruits with little effort, oval fruits like balls sometimes yellow, sometimes purple.

Without a doubt, a curious fruit that is named cocoa everywhere, absolutely delicious in its purest form, which, mind you, not the remotest resemblance to the chocolate. Perhaps for that reason, there, under the tree, you do not feel the majestic aroma of chocolate, a kilometer further on the narrows road it surprises you, penetrates you, a resounding perfume that disorients you.

Is the Chocolate Factory, David Ruben Suarez Abella Complex or Cocoa Derivatives Company, names associated with a kind of sanctuary where for over half a century cocoa takes several forms, all tradable and not always so delicious to the palate.

With obsolete machinery of the former German Democratic Republic (GDR), from the sixties, the fruit is processed in a temple, a Cuban industrial jewel where cocoa beans are roasted, the shells separated, the mills provide liquor and through other processes they get butter, chocolates, toppings, … magical steps for a magical product, the perfect food for the gods.

More than a decade of young film in Cuba