Cakes and violins, widely accepted in Santeria, did not come from Nigeria, but from the United States and Europe. The Regla de Ocha was not a culturally aseptic operating room. 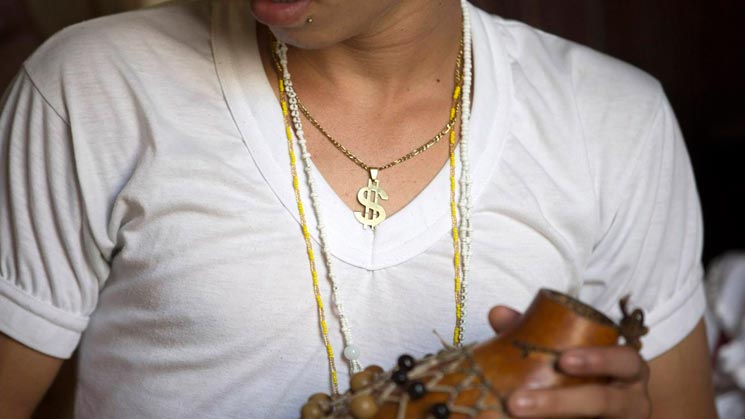 In Miami the religious schism between Cubans and traditionalists is a fact. The Cubans practice the Regla de Ocha or Santeria, a typically Cuban product resulting from the agonizing struggle between domination and resistance, and from transculturation. The traditionalists follow the African original—and more properly, the Yoruba culture and religious practices—taken as a launching pad. Getting ahead of myself, Cuba vs. Nigeria.

This sort of journey to the seed of the latter is, among other things, a consequence of globalization and the diaspora. But it has also had an impact on the island, until recently considered the marrow of Santeria and “an authentic exporter of this culture in the world.” Cuba is not a crystal bell, nor is it exhausted in those images of old cars and indigenous and decontaminated musical sounds that seem inscribed in stone in the common Western imagination.

However, in religion, as in politics, what’s real is what isn’t seen. The obturator of the problem consists, basically, in the following: the former want to maintain the “purity” of the Regla de Ocha, as taught by their elders on the island; hence their reluctance to accept modes, rituals and practices they consider alien to its “essence.” The range of implications is wide: it ranges from rejecting the use of an African snail in initiation rituals to not accepting the presence of believers affiliated with the traditional Yoruba religion in the ceremonies. These accept he heading of more than one orisha; the others don’t.

And perhaps the worst: the latter want to expel those initiated in Ocha who violate a pact that no one has signed, a practice of Torquemadism and punishment more typical of the Catholic Church than of a religion whose historical virtue, if any, is horizontality and not the institutionalizing verticalism, exercised in this case by a minority, however, to whom the fight is owed in the United States to recognize Santeria as a religion as legitimate as any other and so that the sacrifices not be persecuted by the police authorities, who act according to current laws regulating cruelty against animals.

It was a new fact that they had to face when they were transplanted to another cultural environment, in which very often those expressions of religiosity of African origin―Santeria, Voodoo, Candomblé―are socially stigmatized as demonic, exotic and uncivilized―in short, alien to the so-called the American creed. The case of priest Ernesto Pichardo, of the Babalu Aye church in Hialeah, was undoubtedly a step forward, although in the long run not without problems, after a ruling from the Supreme Court (1993) that marked a turning point and attracted adherence and sympathies in liberal American media for constituting an indicator of otherness, and ultimately of pluralism, diversity and multiculturalism.

But those same actors fall in this point, not so much for theological-ritual reasons that are not my competence, but for the most important thing: to reproduce the limitations of a matrix culture in which centralization, exclusion and homophobia, backward problems very difficult to extricate, rule. And, from this point of view, the microclimate where they move does not help either because too many times it is more of the same. The fig leaves are not worth much in the sense of recognizing the religious freedoms guaranteed by the Constitution of the United States, on the one hand, and on the other, eliminating those who violate regulations imposed by them. There are two other terribly real words, power and control, in-between the lines.

But there is another problem involved here: the exercise of religion, which is part of culture, cannot remain outside the times, characterized by transnationality and border porosity that in itself dislodge any attempt at essentialism. I will mention only three facts when touching on this topic: in-between is the norm today; hybridization, a way of being and existing; national literatures can no longer be constrained to language as a sine qua non of literature. It is also a problem of vision and, above all, of futurity.

Someone once wrote that a tradition that isn’t open is doomed to repeat itself—and worse still, to become stagnated and not stand the harsh test of time. In case you have forgotten, it should be remembered here that cakes and violins, widely accepted in Cuban Santeria, did not come from Nigeria, but from the United States and Europe, that is, the Regla de Ocha was not a Carolingian village or a culturally aseptic operating room in its very genesis or in its history.

And perhaps most importantly: that ecumenism means the possibility of finding the community within the differences, much more in the case of two systems that are tree and branch, finger and fingerprint.

Coronavirus in Cuba: 110 discharges and 42 new contagions in seven territories

Coronavirus in Cuba: 110 discharges and 42 new contagions in seven territories