Ailynn TS
in Gender in Cuba
0 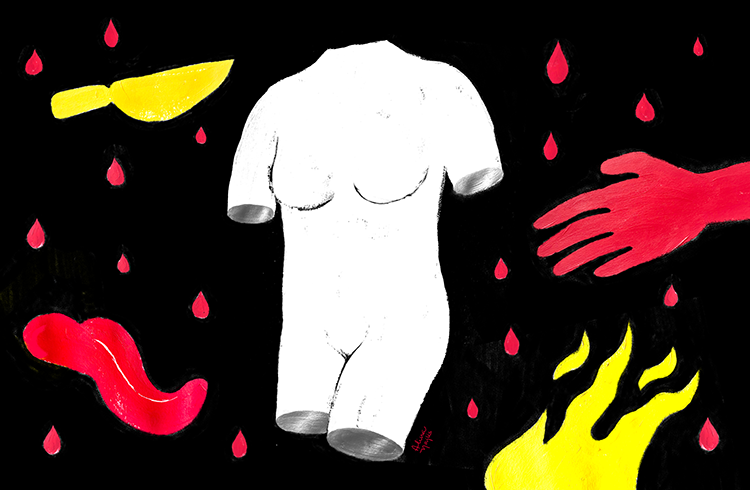 It was not one more homicide: it was femicide. After this precision, Leidy Maura Pacheco Mur will continue dead; her son, an orphan; her family, torn apart; Cienfuegos, dismayed. However, it is important to specify this.

On September 26, 2017, Leidy Maura was murdered. She had gone to the Commerce enterprise interested in a course, she had visited friends, she had lunch with her husband and gotten on a bus and then on a van. She had gotten home. But she was kidnapped. Then she was raped. Lastly, she was murdered.

On September 27, the whole city – including one of the alleged murderers – mobilized to search for the missing woman.

It hasn’t just been Leidy Maura. We don’t have figures, but the cases are made known by word of mouth or they are registered by the non-official media. Misleydis González; the 18-year-old woman in the municipality of Florida; Daylín Najarro Causse and Tomasa Causse Fabat, also in Cienfuegos; the woman from San Miguel del Padrón; or the young woman in Regla are some of them.

In the last two decades there has been an escalade of violent homicides against women in Latin America. It has been confirmed that violence affects women in a disproportionate way. That fact, and the struggle of social groups, has promoted the definition of the crime of gender-based homicide as “feminicide” (or “femicide”).

The legal regulation against gender-based violence has had two stages. Between 1994 and 2004 laws were approved fundamentally about domestic and interfamily violence. Since 2005 laws have been drawn up and implemented that classify the gender-based homicides as a specific and more serious crime.

Not all the murders of women are femicides. For it to be classified as such, the victim has to have been murdered by a man for being a woman. To determine it, it is necessary to inquire on the circumstances of the death and the murderer’s relationship with the victim. What’s most common in Latin America is that the femicide is carried out by a couple, former couple, a close or familiar person, and/or that it is presided by a rape.

When speaking of femicide as a specific crime, it is recognized that its cause is not individual (or a “crime of passion”). The reasons have to be sought in the structure of social power and relations of violence against women, girls, trans or sexually diverse persons.

In the juridical field, the recognition of femicide had a milestone in 2009 with the case of the Campo Algodonero in Juárez, Mexico. On that occasion three young women went missing and were murdered. The Inter-American Commission on Human Rights (IACHR) reported that the Mexican government was responsible because it had not investigated or indicted these events, nor other hundreds of them since 1993. Femicide was recognized by the international community in 2013 at the session of the UN Commission on the Status of Women.

Sense and folly of recognizing femicide

According to specialized analyses, the fact that femicides are recognized and tried doesn’t seem to have a direct incidence on their number: in those countries where it is classified as a crime, until now there isn’t a tendency toward a decrease in cases. Then, why continue struggling for the legal regulations (constitutions, penal codes and legislations in general) to recognize femicide as a specific crime?

In the first place, speaking of femicide makes the subject a public, political matter that requires the attention of the state and of social groups and organizations. It also reaffirms that they are not isolated cases nor are they explained by the individual lives of the persons. On the other hand, doing so sheds light on the need to build institutions that protect possible victims and make viable their access to justice when they are the object of violence. It also allows for making inquiries on the specific causes and treating them as a matter of citizens’ wellbeing, while it ensures the development of tools to systematize and study the processes of violence and to design focalized and effective policies.

Cuba, the Constitution and femicides

What happened to Leidy Maura has had unusual visibility in the official press through the provincial newspaper 5 de septiembre. This press organ signed an agreement with the Provincial Court in February of this year; under this backing it covered the private trial last August 7 and 8 of the accused in the case of Leidy Maura.

In its coverage of the last day, the 5 de septiembre opted for amplifying the popular voice: “While nothing will bring Leidy back to life, the people of Cienfuegos trusts that the weight of the law will fall on the murderers.”

The social institutions and groups are abreast of the subject. Barely six days after the disappearance of Leidy Maura, the Radio Ciudad del Mar station announced that in the very Cienfuegos the first legal cabinet against gender-based violence would be created. The National Union of Jurists of Cuba chose that province as the first venue with that mission in the country. Its operation is being advised by jurists, psychologists and psychiatrists; it has the collaboration of mass organization (the Federation of Cuban Women, among them), the military (the Ministry of Interior) and state organizations (the Ministries of Public Health, of Education, of Labor and Social Security) and declares that it guarantees the training of jurists on gender-based subjects and violence.

Other organizations or projects have ensured the greatest visibility of the subject of gender-based violence, which affects a third of the women in the world.

In 2012, the National Conference of the Communist Party of Cuba recognized the need to “raise the rejection of gender-based and interfamily violence and the violence that is manifested in the communities.” It was the first time that a political document at that level recognized the problem.

The Cuban Penal Code, in its Article 263, sanctions to 15 to 30 years in prison or the death penalty to the individual who kills another “when acting with sadistic impulses or brutal cruelty.” Since 1999, that same regulation defined as aggravating crimes against the life and corporal integrity, and against the normal development of sexual relations, the family and childhood, being the souse or having a certain degree of kinship between the victim and the aggressor.

Until now femicide is not recognized in Cuba as a specific rime.

The Draft of the new Constitution of the Republic of Cuba speaks, compared to the Magna Carta in force, about violence against women. Article 45 points out: “The State favors the full participation of women in the development of the country and protects them in the face of any type of violence.” It is not less: in the struggle to grant constitutional rank to the struggle against gender-based violence, that is a firm step.

To ensure greater consequences to this gesture, the same article could recognize femicide as a specific form of violence against women. That would oblige the future reformed Penal Code to also register it.

The following step would be to demand the publication of the number of femicides in the country. Faced by a requirement of this type, it is probable that some will ensure that the Cuban figures are very inferior to those of other countries. They will surely be right, but that would be, however, a meager way of resolving the matter.

We can know the number of femicides only if it is recognized as a specific crime, and only if we know the figures can we make comparative analyses. But beyond comparisons to others, we could favor domestic analyses: about the number of homicides in Cuba, how many are men and how many are women? In what circumstances did the latter take place?

The media coverage of the events and the trial regarding the case of Leidy Maura Pacheco Mur especially has the merit of placing in the official public space an issue that is usually absent, or marginal. It’s not a question of encouraging social panic or filling the press with “sensationalist” contents. The idea is to recognize the problem, assess its reach, draw up dynamic and good sense public policies, guarantee justice for the victims and reparation for their families and, above all, protect potential victims.