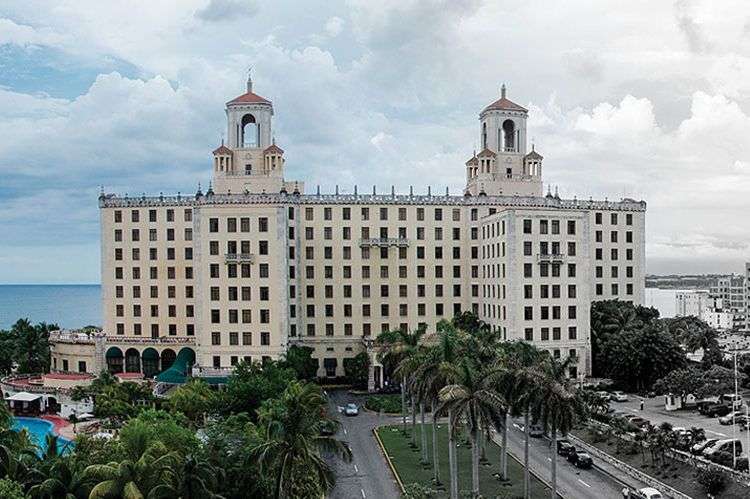 THE AURA OF AN EPOCH HANGS OVER IT. IT HAS ITS own tradition and hallmark. Distinction, elegance, and luxury combine with efficient services at an establishment whose guests over the years have included England’s King Edward VIII; Ava Gardner and Marlon Brando; Graham Greene and García Márquez; Robert Redford and Steven Spielberg, and many, many other celebrities, including Alejo Carpentier, María Félix, Libertad Lamarque, Jorge Negrete, Pierre Cardin, and Nat King Cole…. Cuba’s Hotel Nacional, which opened on Dec. 30, 1930, is the most majestic and imposing on the island; it is, simply, classic. It stands on a rocky hill at the entrance to the Havana neighborhood of Vedado, making it an obligatory highlight of the capital’s cityscape, on the site of the former Spanish colonial Santa Clara cannon battery.

And that location makes it possible to enjoy an unsurpassable view of the city and sea from the hotel, which merges into both land and seascape, with front gardens that project outward toward the city and rear gardens that seem to melt into the waters of the Gulf. This beautiful building’s architecture is a mixture of eclectic and modern, with elements of art deco and so-called Cuban colonial style.

Its rooms hold some 300 pieces of art with patrimonial value. Its Hall of Fame, with portraits of the hotel’s most illustrious guests, leads you on a stroll through the hotel’s history. Many major events took place here. A man who was president of the Republic for just six hours was sworn in by candlelight in Room 412, back in 1934.

The Nacional was the scene of a bloody battle in October of 1933, when more than 400 fired military officers were thrown out of the hotel at gunpoint by their former subordinates. And in 1946, a big meeting of the U.S.-based Mafia was held, organized and chaired by Lucky Luciano.

While the Hotel Nacional is the emblematic installation of Cuba’s hotel industry, the Hotel Inglaterra is the oldest operating hotel on the island. It was inaugurated on Dec. 23, 1875, and can proudly claim to have hosted an extremely long list of eminent guests, from Winston Churchill—an unknown lieutenant in the 4th Queen’s Own Hussars at the time, who celebrated his 21st birthday in Cuba and before he became a major 20th century figure—to Sarah Bernhardt, the celebrated French tragedian who, as Alexander Dumas said, had the face of a virgin and the body of a broom, and who was involved in a torrid love affair at the Inglaterra with bullfighter Luis Mazzantini.

Much was said about that affair; however, the details have faded with the passing of the years. They say that she was able to look beyond Mazzantini’s tight bullfighter’s clothes and appreciate his other qualities, and that she knew how to make him forget about life’s bitterness, especially the burden of age.

They say that he went to see her perform at the Teatro Tacón, and that she made an appearance at one of his bullfights. They also say that she saw him smoking in the restaurant of the Hotel Inglaterra and that she boldly asked him to teach her how, but not in public. The classes, held evenings in the Frenchwoman’s and Spaniard’s rooms, lasted a whole week. One striking feature of the hotel´s interior is its fine Sevillian wall tiles and its markedly Spanish-style sculptures; its façade bears period Cuban decorative elements.

The building that houses the Hotel Habana Riviera, with a prime seaside location, is likewise emblematic, one of the most representative of 1950s Cuban architecture. It is

also notable for artwork made especially for the hotel by the likes of Cundo Bermúdez and Florencio Gelabert.

For many, the Habana Riviera was the Mafia hotel in Havana. Certainly, a large part of the capital required for its construction—more than $12 million—was provided by the Sicilian mob, which made the hotel´s casino into the most luxurious of the 10 that existed in Havana at the time. Meyer Lansky, ringleader of what was known as the “Havana empire,” installed himself in a now-nonexistent suite on the 20th floor and made the hotel into his headquarters.

Engraved into the floor tiles of the second lobby, a symbol is seen repeatedly: three tankards of different colors united at their bases. The blue one represents the power of heaven; the green, the power of money; and the red, the power of blood.

According to sources that this chronicler has not been able to confirm, it is the emblem of the Genovese family. The Riviera was a haven for Santo Trafficante, another mafia boss in Cuba, who owned the legendary San Souci and Hotel Deauville cabarets in 1959; as that year advanced, his expulsion from Cuba became imminent. Trafficante dragged along with him Herminio Díaz, former head of security at the Riviera, accused by Cuban authorities of being linked with the assassination of President Kennedy.

This chronicler insists on singling out yet another of the many hotels that could be mentioned: the Saratoga, located on Paseo del Prado and part of the Habaguanex company. It is a five-star establishment, an elegant building whose interior design combines traditional elements and cutting-edge technology. Its terraces, the so-called Aires Libres de Prado, were the setting for Cuba’s best music in the 1940s and 50s.

One guest at this hotel was Patricia Schmidt, an exotic dancer from the United States whose stage name was Satira. In Havana, she was at the center of a bloody event: she shot to death her lover, who was also from the United States. It was April of 1947 and Satira’s version of the events—true or false—aroused public sympathy. She did not spend much time in jail, and was pardoned in October of 1948.