Nauta Hogar reaches some areas in 115 municipalities, out of the country’s 168. 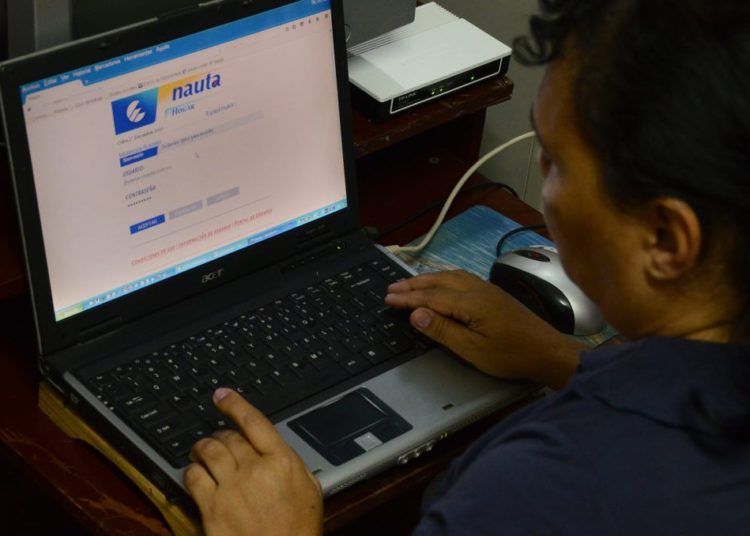 A man surfs the Internet in his home on Amargura and Mercaderes streets, one of the places chosen for the home Internet pilot test, in the neighborhood of Old Havana, in December 2016. Photo: Joaquín Hernández / Xinhua.

More than 70,400 Cubans are connected to the Internet today from their homes, a service that has grown timidly since its inception in 2017 compared to the popularity of the recent activation of the mobile data with 3G technology, which already exceeds 1.8 million customers in little more than a month.

Cuba, one of the most disconnected nations in the world, offers the Nauta Hogar private service in 115 of the country’s 168 municipalities, according to recent data from the state telecommunications monopoly ETECSA, published last Saturday by the official daily Juventud Rebelde.

95 percent of Nauta Hogar customers use the 1-megabit connection, the cheapest of the four available packages, ranging from 15 to 70 CUC (Cuban convertible peso equivalent to the dollar), high prices when compared to state wages, whose average does not exceed 30 dollars per month.

Until two years ago the connection from homes was only available to a few of the island’s professionals, among them doctors, journalists and teachers, who receive the subsidized service by the State.

The marketing of Nauta Hogar is part of a government strategy that seeks to close the technological gap with the rest of the world and develop the opening of the Internet, part of which consisted in the opening of hundreds of public Wi-Fi hotspots in 2015, the government’s first visible step in favor of the “computerization of society.”

The start of the long-awaited mobile data service on December 6 has been one of the most recent efforts of the administration of Cuban President Miguel Díaz-Canel, an engineer by profession, who is betting on the use of technologies and has insisted on the usefulness of e-government.

“We will continue developing the infrastructure and continue expanding our potential for more access to, quality and affordability of the service,” said Díaz-Canel, who last Friday gave the closing speech at a national meeting on computerization and cybersecurity.

Until the advent of mobile data, 60 percent of the 5.9 million Cuban Internet users accessed the network from their study and work centers.

In Cuba (11.1 million inhabitants) there are more than 5.3 million users of mobile lines.

The island is working to provide electronic procedures and expand online payment services in the national territory, where cash transactions still predominate.

Last December, Cuban Minister of Communications Jorge Luis Perdomo announced before the National Assembly that this year they would begin to test the mobile service with 4G technology in large cities, although he did not specify dates for the official activation.