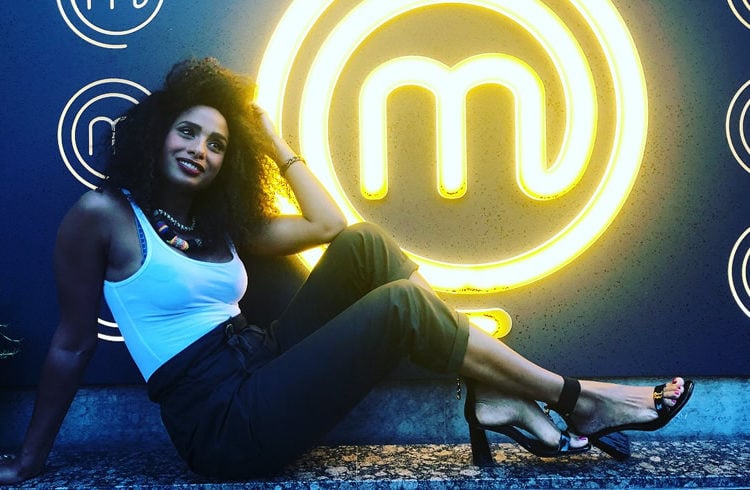 On the night July 9 some 3 million persons were watching for the broadcast of MasterChef 6 Spain, the toughest and most tear-jerking contest, according to the Spanish press comments. The emotions overflowed on the dish, a rather neck-to-neck duel to get the title. Cuban Ketty Fresneda came in a second place that tasted gloriously for her after 13 weeks of a difficult competition. “I’m super happy. Of course I would have loved first place, but I think the competition was fair.”

In the last culinary match, Ketty delighted with a seafood salad with a coconut cupula, a monkfish in its juice and, as desert, a sponge cake with a “Cuba libre” flavor.

“I was rather nervous. But I’ll stay with the good part: I’ve learned a great deal, I’ve met a great many good people and doors are going to open for me to study, to grow and train to be a chef, which is what I like.”

In October, the Cuban, who lives in Pontevedra, Galicia, will be able to attend the Basque Culinary Center, one of the world’s most important cooking schools, and, from there on, she will start materializing her dream of opening her own restaurant.

Did you have some difficulty because you were Cuban? Did you feel any disinclination toward you during the competition?

Actually, I did feel a bit of prejudices at the beginning. They saw me as extravagant, a pretty face and they thought that I was there to show off. But they were wrong. I’ve been working in Spain for seven years, helping my guy in his kitchen, not going around looking pretty, but rather in a kitchen taking out dishes. I didn’t go to MasterChef to sell my face, I’m a working girl. We Cubans are used to that. The good part is that little by little I started demonstrating that I was “dangerous,” not because of my appearance but rather because I like to be in the kitchen and I feel comfortable in the kitchen.

During the program there were times when they pointed you out for your strong, extroverted character. Is that a trait of your Cubanness?

It’s a combination of everything. I have a strong character. I’m a person who says what she thinks. I don’t run around the bush, and of course a have frequent run-ins and that created problems for me. Not everyone wants to hear the truth. Then it’s a mixture of my character and my Cuban origin. And the experience of arriving in Spain when I was very young, at 23. I faced the bad reputation that some Cuban women usually have here. I had to use that character to put a stop to some people.

And how did that character treat you in the contest?

In the contest I found wonderful people. They are the friends that approached me, that took care of me, who were interested in me because of what I am not because of how I look. They respected my culture, they respected my Cubanness. They played music at home so I would dance and to make me happy. We are real friends.

You’ve said you’ll open your restaurant. Will it be in Pontevedra?

I’m still not sure. My sister insists a lot in that I open it in Miami, but it could be in Madrid or in Havana. I’ll decide that after I have my title as chef.

Havana could also be an option for you?

My husband would love it. He is Galician, but he is in love with Cuba. His eyes shine. I’d like for things to continue changing there so it would be more favorable.

Would you mix Galician and Cuban cuisine in your restaurant?

I would always use typical products from Cuba, like avocados, which are wonderful. They can be combined with everything: fish, seafood, meat. Bananas would also always be in my recipes. They are very versatile. The sponge cake with Coca-Cola flavor I made for MasterChef’s final had as a base banana, which gives it texture. It barely takes wheat flour. On the other hand, I have fallen in love with vanguard cuisine. I could create a dish called “Ropa vieja” and that it not be the same as the one your grandmother serves you. It’s the type of things I would like to do. And of course I would like to combine with something of Galician cuisine, which has that privileged seafood. It has a sea that produces spectacular products – among the best in the world -, and make combinations. For example, serve an emulsion of beans with some seafood.

Outside the kitchen, what decorative attributes couldn’t be missing in your place?

A must is very low music that would remind me of my island: Celia Cruz, Benny Moré, the Old Trova. No matter how sophisticated and modern the restaurant is, I would like it to always have that music, that it is noticed that there’s a Cuban in the restaurant.

How could you help other Cuban persons who have the same vocation for cuisine and for enterprise?

I would love to have a blog. Right now I’m more focused on my Instagram(@KettyMChef6), where I usually post recipes. I would love to place emphasis on the usable cuisine: let’s not throw out what was left over from yesterday, we can reinvent and make very delicious dishes. I have shared some recipes and I have received many thanks. When I finish my studies I would love to teach others. For my island, whatever is necessary.

What was your family’s reaction in Cuba?

They are very proud of me. They have been surprised with how fast I have matured; things are clear for me. When I presented myself for the contest that is so important, which as is known is no joke, they were a bit scared. If MasterChef is hard for those from Spain, imagine for the foreigners. Then since I took the step forward, they are proud. Now I have to continue working.

Billboard: Contemporary Dance of Cuba with another skin