A venue of defeat 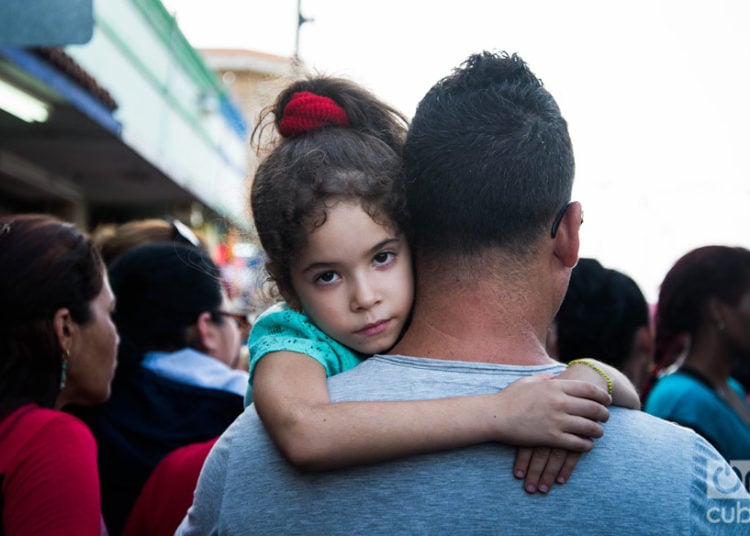 Many made the journey through Latin America with their children. Photo: Irina Dambrauskas.

Almost all those who are in Nuevo Laredo have a visa they got in the south of Mexico to remain 20 days in the country. On January 13 Mexico gave the last safe-conduct: on February 3 the Cubans will serve Peña Nieto – who doesn’t want one more front of conflict with Trump – the deportation on a platter.

Carlos Alberto is 40 years old and is from Sancti Spíritus. In the Panamanian jungle he survived on some cans of sardine and tuna he bought in Colombia, he slept on the ground on the banks of rivers, he was guided on his walk following the signs left by the Cubans who had already passed through there. In the jungle he saw bodies thrown at the side of paths. He took days to cross the Darien Doughnut. So far he has spent 9,000 dollars.

On the border between Mexico and Guatemala those who wanted, like Carlos Alberto, to obtain the safe-conduct without having to pay for a lawyer had to spend some days in a prison for migrants.

More than half of the Cuban migrants were mugged and at some time during the journey they were robbed of everything they had: money, clothes. The thieves had a gesture of solidarity for the victims they mugged. They let all of them keep their passports.

1. Cuban Americans from Texas crossed to Nuevo Laredo to hand over all type of donations. Photo: Irina Dambrauskas.

2. Cuban Americans from Texas crossed to Nuevo Laredo to hand over all type of donations. Photo: Irina Dambrauskas.

3. Cuban Americans from Texas crossed to Nuevo Laredo to hand over all type of donations. Photo: Irina Dambrauskas.

4. Cuban Americans from Texas crossed to Nuevo Laredo to hand over all type of donations. Photo: Irina Dambrauskas.

“If I return to Cuba I’m going to be a burden for my mother, I’m 38 years old,” he says. He made the journey in group: 20 of them went from one place to the other all the time. He was carrying 5,000 dollars.

“We’ve gone hungry and everything has gone down the drain. I sold my home in Holguín as well as the motorcycle, I’ve already spent all that money and I have absolutely nothing left.” He’s spent most of the money on coyotes, he tells OnCuba.

“They rip you off: you pay them so they will cross you and later they leave you abandoned. In Colombia I was ripped off twice until one of them crossed me to Panama.”

When Obama suspended the dry foot Giovanni was already in Mexico, in Chiapas. Carlos Alberto was sleeping in a shelter in Tapachula: “We started crying a few minutes after we heard and immediately there was a long silence.”

They all repeat the same thing: they can’t return, there isn’t a plan B.

Carlos Alberto is wearing a tight T-shirt with the U.S. flag and red pants. He’s one of the few farmers:

“I had my horse and my house but I sold everything to go after this dream. I could return, yes, and recover some horse…but I have my mother and sister in Miami.”

Giovanni also has family over there waiting for him.

Roberto Gerardo is 24 years old and he’s from Havana. He looks like a regueton singer. “It’s the clothes I got hold of and you’ll never see them dirty.”

He is a mechanical engineer, a specialist in turbines. He left, he says, “because of anguish.”

In Costa Rica it’s easy to be illegal. When he got on the bus he felt “desired,” it seems Cuban mulattos are well catalogued among the Costa Rican women. But not him, he didn’t pay them much attention, his wife is waiting for him in the United States. Roberto has a tattoo of half a heart. She had the right part tattooed when she left.

2. A van that brings the donations from Texas is in Laredo. Photo: Irina Dambrauskas.

A van that brings the donations from Texas is in Laredo. Photo: Irina Dambrauskas.

One of the women who fell in love with Roberto in Costa Rica is a sociologist, Marita. “She told me she was moved when Fidel died but I didn’t feel anything.” On November 25 Roberto was in Brazil waiting for a motorboat that was going to Turbo:

“One feels a bit of nostalgia because he was Cuba’s symbol, but my generation really doesn’t identify with Fidel: what you see from abroad is marketing, socialism does marketing abroad. There are social differences in Cuba although not like in the rest of Latin America, of course. I went through 12 countries. You have to be in the Amazon six days to understand what is really bad, they have a few hours a day of electricity, they starve to death.”

Roberto says that not everything is bad in Cuba. “But simply what there is doesn’t suit me, it depresses me.”

The Havanan worked in an aeronautics company with Canadian funds:

“With what they should have paid me they paid three persons, they decided that instead of having someone who earns well for his work that everyone should be paid badly.”

The luggage he prepared to leave Cuba was badly thought out. He left for Guyana with an enormous suitcase, four sets of clothes. Right there the coyote told him what he had to rule out and he obeyed him. In Boavista, Brazil, he lost his wallet. He had to sell his cell phone to recover that money. He carries no amulet with him: “I don’t like religion, Jesus Christ was the first communist and I’m running away from the communists,” he jokes.

The journey made him get used to eating once a day. In Cuba he always ate four meals. He left because “there’s no place to have a different opinion”:

“Those who really question have to leave.”

For Carlos, a bus driver from Havana, it is the first time that the door to the United States is closed to him with dry feet. They had closed it for him, he says, more than 15 times with wet feet. He had rented a house in the beaches east of Havana from where he built and put afloat once and again his vessel, driven by oars and a sail. It took him an average of six days to get close to Miami.

Carlos used to drive a bus in Havana. It was his, a private vehicle. One day, he commented to OnCuba, he refused to pay a bribe and it was taken from him. Then he said to himself: “I have to leave because I can’t make a living, I have to grow.” Ever since he was returned the first time he suffered marginalization: “When I would do any type of paperwork they would say to me ‘but you are a recaptured.’”

Jeorquiz tried it three times. One night at the beach he launched himself almost jokingly with his friends: “And if we leave for Miami?” The following day they started assembling a raft. “Once you’ve thought about leaving there’s no turning back, you’ll do whatever to leave.”

He says he doesn’t have a specific profession: “I have all of the ones that are necessary.” He studied to be an agricultural engineer but worked as a plumber, carpenter, electrician and he now lives his condition as a migrant as a new trade.

“It’s much more difficult here than on the water. There are more probabilities of getting killed by a paramilitary than for a shark to eat you.”

At least half of the migrants are university graduates or qualified workforce. The employees of the AMAR shelter can’t believe there are so many engineers staying in their institution. Very few of them surpass 45 years. The average age is 35. They are the sons of a Revolution that doesn’t interest them. And apparently the lack of interest is mutual.

They will insist until the end; despite Trump’s announcement of a wall and closing the borders. It is increasingly more difficult but they insist on entering the United States no matter what. To the north of the border there is someone important – a wife, a daughter, a friend – waiting.

They also insist because to the north of the border the floor is lower: they can go hungry which they didn’t in Cuba; they can have a harder job than the one they had in Cuba; but the ceiling is higher. The freedom they extol is the air there is between the floor and the ceiling of possibilities that a country can give them.

Faced by the impossibility of entering the United States there are many who are evaluating the possibility of staying in Mexico. They have appealed to the Mexican Human Rights National Commission to be present and have requested legal advice from the provincial authorities to extend their temporary visa first and to find out how they can stay to live in Mexico.

They left Cuba and they arrived. They thought they would arrive and would enter; and if they entered they triumphed. But for the time being Nuevo Laredo seems much more a venue of defeat.

DJ Leydis in the White House