nieves
in Migrations in Cuba
1 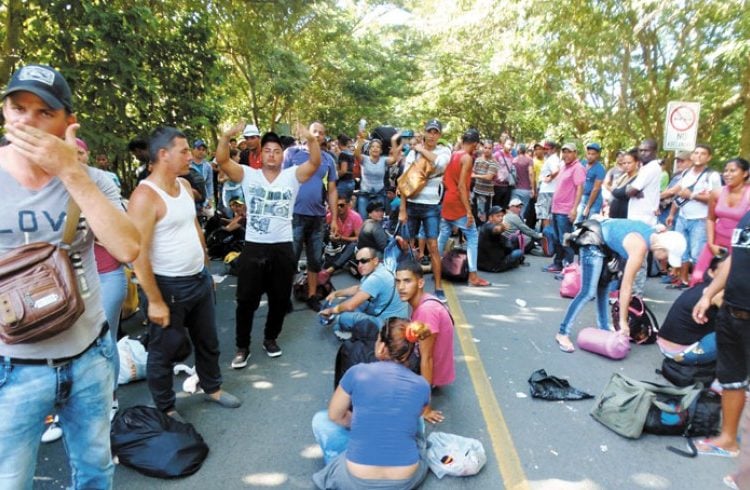 A group of nearly 2000 Cuban migrants is still stuck in Costa Rica, following a clash with Nicaraguan Police that impeded their pass through that country, as part of a journey whose intended destination is the United States.

Nicaraguan forces welcomed the group of immigrants with plastic bullets and tear gas, turning them back to Costa Rica, from where they were coming after crossing all the countries between that country and Ecuador, where the trip started.

The immigrants had been granted humanitarian visas in Costa Rica to give them enough time to get to Nicaragua, but had to turn back when Nicaraguan anti-riot troops attacked 700 of them who had advanced 4 miles from the border.

Since Sunday, the Nicaraguan government has been blaming its Costa Rican counterpart for causing the conflict by giving Cubans permission to cross their territory.

The images of the events are dramatic. The level of violence used by the Nicaraguan troops has shocked the relatives of the immigrants in Cuba, who fear for the fate of the loved ones.

So far both sides have been issuing political statements, but there is not much information yet about the consequences of the crisis.

Costa Rica has threatened its neighbour with taking the case before the Organization of American States (OAS), while Nicaragua has said that they will be complaining before the Central American Integration System (SICA).

It’s very possible that the case will be analysed at a meeting of the Community of Latin American and Caribbean States (CELAC), which began on Monday in Ecuador.

Nicaragua said that they were acting in defense of their national sovereignty, adducing that the Cuban immigrants had entered the country illegally and had damaged customs checkpoints.

“With a view to restoring order and citizen safety, special forces of the National Police carried out actions to make the Cuban immigrants return to Costa Rica, from where they had been thrown into Nicaragua,” said the Nicaraguan police.

The respective positions of Nicaragua and Costa Rica have been interpreted by the other as an opportunity to take further a long existing bilateral conflict, in the context of the lack of political dialogue between the two nations.

Over the last few decades, diplomatic relations between the two countries have deteriorated due to disagreements about the dredge of shared sections of rivers, which have been taken to three trials at the International Court of Justice in The Hague.

“What’s unacceptable about this situation,” said Costa Rican Foreign Minister Manuel Gonzalez, “is that a problem that should have been approached from a humanitarian perspective, has fallen in the middle of a political feud.”

According to Gonzalez, this crisis should be dealt with by all the countries through which the Cubans will be crossing on their way to the United States:

“Costa Rica did not cause this problem. This is a problem that involves all countries from Ecuador, where the journey started, to the United Sates. If we don’t coordinate our response to this problem, there won’t be a real solution to it,” he added.

The solution will also have to take into consideration the tantalizing effects of the exclusive benefits the Cuban Adjustment Act gives immigrants from that country when they arrive in the United States.

And of course, it will need the participation of the Cuban government, which did not make public statements on the issue until Tuesday night.

Costa Rican President Luis Guillermo Solis will be travelling to Cuba on December 15.

“The issues to be debated have not been defined yet, but I think that President Solis will convey the treatment we have given Cuban citizens and the importance we have given to the issue. That is all we can say,” said Gonzalez.