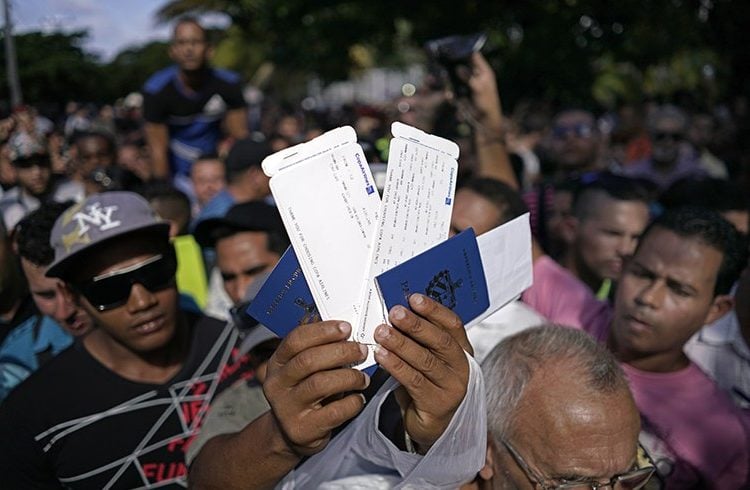 A total of 723,844 trips by Cubans to other countries were reported in 2016, a figure that doubled the number of exits abroad by the island’s residents since the migratory reform came into force four years ago.

Between 2013 and 2016, more than 670,000 Cuban citizens traveled abroad, according to data from the newspaper Juventud Rebelde. Out of this number, 78 percent did so for the first time.

Using as a basis the statistics of Central America and the Caribbean, the publication points out that the number of exits abroad of Cuban citizens “is increasingly resembling more” this indicator’s performance in other countries of the region. As comparison it reveals that the number of trips abroad made by Dominicans – whose country has a population estimated close to that of Cuba – stood at around half a million in 2016.

In the case of those who definitively immigrated to another country, the article indicates a nine percent. That is the amount of Cuban travelers who “did not return to the country within the period of 24 months” established by the Migratory Law to not lose their residence, commented Ernesto Soberón, director of Consular Affairs of the Foreign Ministry.

According to Soberón, today “Cuban citizens do not immigrate massively but rather they are increasingly traveling.”

Up until the modifications made to the 2013 Migratory Law, Cubans couldn’t remain abroad for more than 11 months without the authorization of the responsible migratory authorities. This period was extended to two years, without the loss of duties and rights as a citizen of the island.

The tendency toward repatriation registered a total of 14,000 persons in 2016, according to data made known by the National Bureau of Statistics and Information (ONEI).

With its current migratory policy, Cuba permits the repatriation of persons born in the country who lost their residence after settling abroad. For this they must carry out the paperwork that has among its requisites presenting the request and the valid passport, paying a consular tax or duty, and informing about a person of reference that will guarantee their accommodations and maintenance on the island, until the repatriated person can do so on his/her own.

The number of Cubans who established residence on the island during last year is higher than the total of those who decided to do so between 2013 and 2015. Most of them immigrated to the United States, according to what ONEI specialists indicated in a recent state television broadcast.

“They are [Cubans] of all ages and of both sexes, although there is a predominance of persons older than 50 years. These numbers reveal one of the highest rates of recent years, whose tendency has been maintained in 2017. They are resettled Cubans and foreigners,” said the director of the Center for Population and Development Studies of ONEI, Juan Carlos Alfonso.

Alonso also explained that the migratory reform has led to a decrease in the external migratory balance – immigrants minus emigrants – from the country. “It is a negative balance, but it has decreased. From 2013 to 2016 it resulted in -36,000 persons; however, that same figure was the annual average before the application of Decree Law 302,” he noted.

In 2013 and 2014 the external migratory balance concluded in positive numbers for the first time in decades, with a rate 0.3 and 0.2 per 100,000 inhabitants, respectively. “Those who returned” were barely a bit more than “those who left” to permanently reside in another country. Juventud Rebelde attributes this unusual phenomenon to the influence of the new migratory law.

However, in 2015 and 2016 (-2.2 and -1.5) the situation was again expressed in negative numbers, a tendency that the daily links to the rapprochement between Washington and Havana.

Considered one of the principal measures approved by the government of Raúl Castro, the reform put an end to a decades-old restrictive policy that forced Cubans to request a special permit to travel abroad. In addition to expanding the amount of months – from 11 to 24 – that a Cuban could remain abroad without losing residence on the island, it also increased from 60 to 90 days the time allowed for emigrants’ visit to Cuba.

AmeriCuba: U.S. music made in Cuba