"We cannot ignore the many Cubans who live abroad who are proud of and nostalgic for their homeland."

EFE
in Migrations in Cuba
0 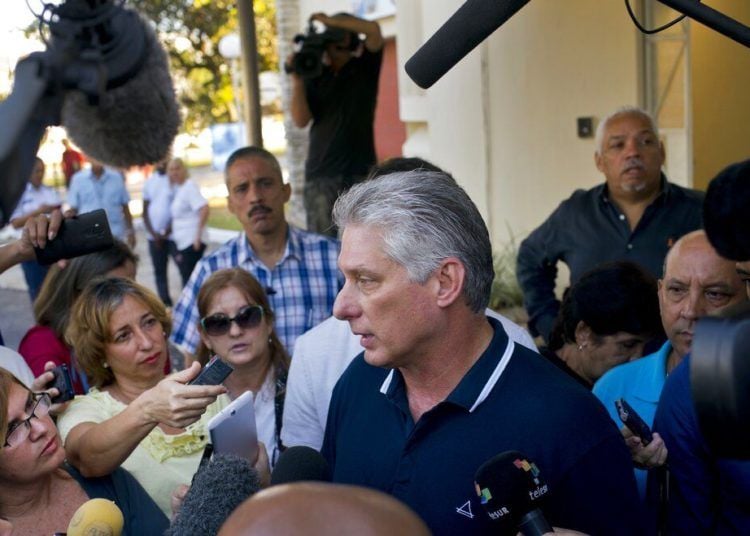 In the midst of a “new colonial and neoliberal capitalist strategy” led by the United States, the country must “avoid isolation, without compromising principles or positions,” the president said at a meeting with Cuban diplomats reported on in the state daily Granma.

“During current times, when there is a return to the times of confrontation and new dangers arise that need to be faced, it is urgent to prepare ourselves more and more,” insisted Díaz-Canel, who recalled how the U.S. has “intensified” the embargo on Cuba, “especially in the economic sphere.”

Havana and Washington reestablished diplomatic relations in July 2015 after more than half a century of enmity and began a process of “normalization” stalled now after the arrival to the White House of Donald Trump, who has given a new turnabout to the policy towards Cuba.

The island used this “thaw” to strengthen alliances abroad, including the historic bilateral agreement signed in 2016 with the European Union, which puts an end to the restrictive “common position” that conditioned the bloc’s relations with the advances in human rights on the island.

The Cuban president, who on April 19 will have served a year as Head of State, noted “the need to continue working with Cuban emigres abroad, not only in the United States.”

“We cannot ignore the many Cubans who live abroad who are proud of and nostalgic for their homeland,” said Díaz-Canel, who called for an inclusive migration policy, because “we do not have to agree on everything, but we can come together,” he said.

In addition, he called attention to the “strong impact of the consular services” provided by the Foreign Ministry to Cubans inside and outside the country, which must offer a service distinguished for “quality, good treatment and professionalism,” he added.

More than 2.4 million Cubans reside abroad, the vast majority (84%) in the United States and Canada, and the rest in Europe (10%) and Latin America (5%), among other regions, according to the latest available official figures, published in October 2017.

Among the most frequent complaints of Cuban emigres are the slowness and complexity of the procedures, the bureaucracy and the high cost of the passport.

The document, one of the most expensive in the world, costs the equivalent of 100 dollars for residents on the island ̶ where the average monthly salary does not reach 30 dollars ̶ a figure that is four times higher if the request is made from abroad.

A migratory reform approved in 2013 during the presidential mandate of Raúl Castro (2008-2018) included the elimination of the exit permit for the island’s citizens and relaxed the conditions for the return of emigres.

At the MINREX meeting it was also reported that 551,908 Cubans traveled abroad for personal reasons in 2018, 20.13% more than the previous year.

Since the reform came into effect, the island’s residents have made more than 3.4 million trips abroad.

9,550 kilometers to vacation on the “island of freedom”