77% of the confiscated drug arrived on Cuban beaches as part of "international drug trafficking operations that did not have the island as destination." 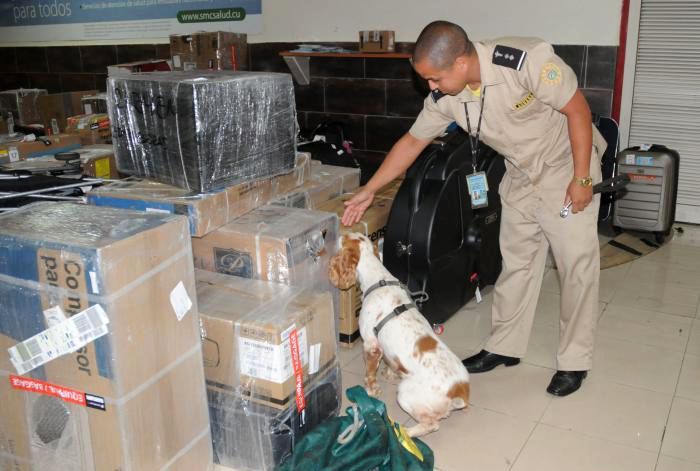 Cuban authorities seized about 2.4 tons of drugs in 2018, mostly marijuana shipments intercepted on the coasts, a figure that represents the lowest amount of illegal substances seized in the last three years, according to the Ministry of the Interior (MININT) in a report published this Wednesday.

The Cuban authorities last year confiscated more than 2 tons of marijuana, 363 kilograms of cocaine, 3 kilograms of cannabinoids, one of crack and 0.15 of hashish.

77% of the confiscated drug arrived on Cuban beaches as part of “international drug trafficking operations that did not have the island as a destination,” said MININT’s text, cited by the daily Granma.

According to the report, these maneuvers were allegedly organized by Cubans residing abroad with the use of speedboats, which “accounts for the movement of sea vessels through routes close to the country” plus “the detection of possession and consumption” by yacht crews.

Cuban border patrol troops frustrated two attempts to introduce 144 kilograms of marijuana by sea and detained four people. In addition, they neutralized two other operations in jurisdictional waters, with a total of four captured foreign drug traffickers and 132 kilograms of confiscated marijuana.

In the airports, mainly Havana’s José Martí, 49 attempts to introduce drugs to sell in the country were aborted, for which 90 people ̶ 54 Cubans and 36 foreigners ̶ were arrested and a total of 81 kilograms of narcotics were seized, more than the 64 kilograms confiscated in 2017.

According to MININT, the means of hiding the drug have gained in complexity and have become more difficult to detect in drug traffickers, who introduce them in their genitals, ingest capsules, attach packages to the body and mix them in food and parcels.

“The majority (of these operations) was organized and financed abroad by Cuban emigrant traffickers, with the use of couriers of various nationalities and origin in different countries,” the report specifies.

Cuba maintains a policy of zero tolerance for drugs, applies heavy sanctions to drug traffickers and provides its citizens with free treatment options for detoxification.

Drug trafficking is punishable on the island with high sentences and even life imprisonment, and possession is also penalized, while consumers only receive fines and warnings when dealing with minimum doses for personal use.

The Cuban authorities condemn “the negative international tendency towards the legalization of marijuana” and has warned tourists who arrive at their borders from nations where the consumption of this substance is legal about it.

The head of the Cuban Border Patrol Troops maintains an exchange of information in real time with anti-drug forces from neighboring countries such as the United States, Mexico, Jamaica and the Bahamas, and cooperates with 37 international police services, Interpol and other agencies.

Last February, MININT reported it had collaborated with the authorities of Costa Rica and Interpol to capture a drug trafficker of Cuban nationality.

The criminal, identified as Neftaly García Testa, organized “foiled drug shipments” in Cuban territory between 2011 and 2016, crimes for which 16 people ̶ 7 of Costa Rican nationality ̶ were tried and sentenced to prison terms ranging from 10 to 20 years according to their participation in the events.