Controversy over labor rights in Cuba 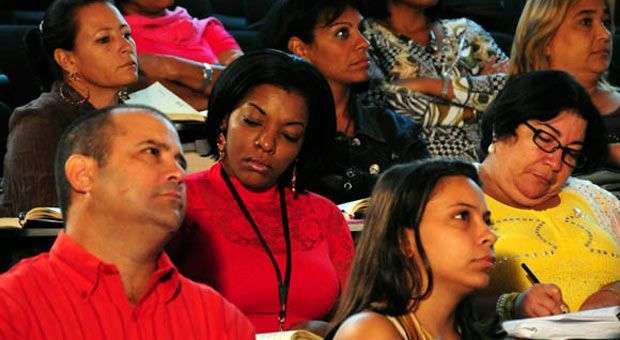 Many people in the world may think it is almost unheard what is happening in Cuba for the last weeks and until mid-October. Every worker or employee has the opportunity to propose amendments to the proposed law governing labor relations in the country.

This public consultation on the draft Labour Code was convened by the Parliament and is undertaken by the unions, and then they will submit all disagreements and concerns, which are already quite a few for the consideration of deputies, who could approve the new rule of law during their next regular session in December.

The legal proposal, however, although tries to capture the major changes in working relations on the island from updating its economic model is far from perfect.

A significant group of workers, specialists and activists began from the first moment to raise their reservations about the draft, and the proposed additions are now pouring, along deletions and changes, in order to make it a more revolutionary law in language and content.

One of the things that immediately jumped into the public debate in personal blogs and social networking, is the claim not to lose the possibility of incorporating the new Labour Code explicitly recognized labor rights of the lesbian, gay, bisexual and transgender (LGBT).

For those who do activism in this area of human rights, this is the first opportunity to endorse a policy specific law discussed and approved by the Communist Party of Cuba in January 2012 on the need to face any kind of discrimination, including on grounds of sexual orientation and gender identity.

This would mean to have at last a law that explicitly protects the rights of LGBT people in some field of social life. This step would have a very positive political impact, because Cuba would begin to be among the nations with laws prohibiting sexual orientation discrimination as promotes the International Lesbian, Gay, Bisexual, Trans and Intersex Association (ILGA, for short in English), an organization in which Cuba participates.

Among the proposals made by activists and experts in this matter, is explicitly added in the future Code that the sexual orientation and gender identity as a reason why you cannot discriminate against any person in their right to work, protection it should also cover people with disabilities and HIV / AIDS.

Furthermore, there is agreement in criticizing the draft not to use a gender focus and appropriate language, that illustrate more dramatically the working woman, and by the absence in the text of any legal protection for those who may be victims of bullying or mobbing by their bosses or colleagues.

A serious problem is that this debate about discrimination, gender equality and sexual rights in the workplace, it is generally quite little known by most of the population, among other things because the patriarchal, macho and homophobic culture that still predominates in Cuban society.

However, there is already a group of voices calling for such advances, particularly activists seeking to be heard and persuade unionists, deputies, heads of state and government, and even the LGBT community itself, so they know and hoist these demands.

Anyway, those who promote these changes in the Labour Code, consider that it will take leadership and political will from the Parliament, the government and the Communist Party of Cuba, so that even if this is not an issue with numerous approaches-product of the very novelty of this debate in Cuban society, some of its leaders took the initiative to raise it, argue it and convince its righteousness.

Protect workers, not their bosses

A preliminary summary on other aspects and controversial chapters, according to information compiled by the trade union movement from meetings where workers discuss the draft law, yielded abundant observations about the question of wages, training and social service as well as improvement and training of professionals.

They have also been the subject of copious suggestions the guidelines on recruitment, the trial period for those who start at a job, the steps to declare workers available (unemployed) and the procedures for the settlement of labor disputes, among other issues more of background than form.

Because for those who study the legislative proposal thoroughly, various shades and disproportions between the guarantees that this law provide for the worker and the worker still jump too hard, and too broad prerogatives proposed for administration and higher levels.

The first, when it reads that the Government would establish the minimum wage without consulting anyone, unilaterally, when logic would be, as some citizens indicate, that this basic indicator were the result of a negotiation with the workers and their union representatives, of according to the economic situation through which the country is going.

In addressing labor discipline, the paper defines three types of conduct punishable as violations by the worker who disobeys, disrespects or abuses in word or deed a superior. However, there is no allusion to the excesses they may commit, and do commit-such bosses to subordinates, particularly the actions of harassment, sexual or otherwise.

And the main problem, no doubt, is an amendment this text seeks to introduce for the resolution of conflicts at work, and strange idea that many workers baptized in their union meetings as “claim the boss’s boss.”

The proposal is to add a procedure that would allow the government to claim against the decisions of the organs of basic labor justice that they integrate with leading trade unionists and workers in each center, to the administrative heads of a higher level, and prior to being able to go to municipal courts.

This step will only prolong the dispute and go against any employee or worker amid a dispute with his bosses, because detract authority to a collective body of law enforcement, whose verdict could be challenged by an administrative body that would always have a greater commitment to who applied the sanction.

However, it is very encouraging that collective intelligence make emerge these contradictions, gaps and even anachronisms in the concepts, language and legal terms, from a Labour Code dating from the 80s of last century, difficulties that not in all cases are resolved in the draft, while adding new inconsistencies.

So the referendum will continue to gain in temperature, and hopefully no modification, deletion or addition suggested by the workers will be left out without being systematic and considered, for this discussion so deep, frank and intelligent allows developing a draft Code of Labor more adapt with the new times.

Virgin of Charity of Cobre: symbol of Cuban Identity

Virgin of Charity of Cobre: symbol of Cuban Identity