A radiant sun smack in the middle of winter, paradisiacal beaches and sanitary safety are the benefits with which Cuba wants to attract a foreign tourism increasingly necessary to revive its battered economy, now even more affected by the pandemic. 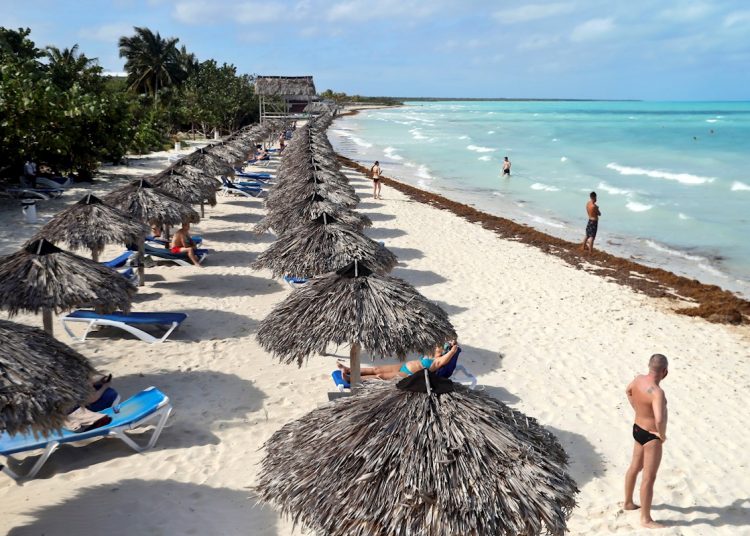 At first glance, it is hard to believe that we are in 2020: several people sunbathe on the sand, others laugh with cocktails in hand and a couple embracing walk near the water. All with their faces uncovered, forgetting for a few days that a pandemic is still raging outside.

The only clue that COVID-19 is still a reality are the mandatory use of masks for Cuban hotel personnel, governed by a protocol that includes taking temperature and hand and foot disinfection at the entrance, which employees kindly make guests comply with, without exceptions.

A radiant sun smack in the middle of winter, paradisiacal beaches and sanitary safety are the benefits with which Cuba wants to attract a foreign tourism increasingly necessary to revive its battered economy, now even more affected by the pandemic.

“We wanted to come to get away from the cold and Cuba seemed the best option. We could not be happier,” said Lisa, a 30-year-old tourist, who traveled thousands of kilometers from Yakutia, Siberia, to “warm up to the rhythm of salsa.”

Traveling to the island was always in the plans of Muscovite Sergei Saliavin. “When I saw the ads, I didn’t think twice and booked. They have been a few days in paradise and it will be hard to return to reality,” he lamented.

The Jardines del Rey archipelago, a group of islets to the north of the country with some 25 hotels, was among the first to receive foreigners after the closure of borders due to the coronavirus and is the only one that still remains almost “disconnected” from the big island.

This would continue until Ciego de Ávila, the province to which Cayo Coco and Cayo Guillermo belong, met the health indicators that allow it to enter the “new normal” phase, active in the vast majority of the country since last October 12 and that includes the complete operation of activities and services.

Only Cuban workers from hotels and marinas that operate in the destination, one of the most popular sun and beach destinations in Cuba, can enter and leave the islets.

Staff work seven-day shifts to minimize the risk of contagion, a logical but strenuous strategy. At the moment there are no official data on employees of these complexes having contracted the disease while performing their work.

About six flights arrive each week from Russia and Canada to the Cayo Coco airport, only a fraction of the 70 weekly flights before the pandemic, mainly from North America and Europe.

More than 7,000 tourists have arrived in these keys since September, a small number compared to previous years, but promising for the island’s authorities.

“Taking into account the situation of the world and the country, it is an important step,” emphasized the director of the airport, Mario Hernández, who announced that two new flights from Canada, the main issuing market to the island, will soon be added.

Within the protocol imposed in all the country’s international airports, reopened in October after eight months of closure, PCR tests are carried out on all passengers, who are then kept under medical surveillance in the hotels until the arrival of the results about 24 hours later.

Those results are sometimes a surprise. Since the reopening of the keys, the tests have yielded several dozen positive cases among Russian tourists who have been isolated in facilities other than those contracted, which has led to complaints on social networks.

“Guaranteeing safety in the flow of passengers from the airport to the hotels is important. From the beginning that was the main message we gave the world: that tourism in Cuba was safe. Hence the increase in travelers we have had not only here, but in the rest of the country,” Hernández insisted.

Tourism is the second official source of income for Cuba, behind the sale of professional services abroad. Before the pandemic, it contributed 10% to the country’s gross domestic product (GDP) and generated approximately half a million jobs.

During the honeymoon of the “thaw” with the United States, the island broke records in 2016 and 2017, when 4.5 and more than 4.6 million tourists arrived, respectively.

The curve increased in 2018 with more than 4.7 million travelers, but fell in 2019 (4.2 million), when the tightening of the U.S. embargo frustrated the plan to reach 5 million.

Sanctions on travel from the U.S., the elimination of cruise trips and the ban on U.S. flights to all Cuban airports, except Havana, have been a severe blow to the sector, which turned to traditional markets such as Canada and emerging markets such as Russia to try to save the crisis.

By 2020, Cuba aspired to receive 4.5 million tourists and reverse the decline of last year, but eight months of border closure and operations reduced by half make that goal impossible.

RUSSIAN IS SPOKEN IN THE CUBAN KEYS

There’s not a lack of Russian flags in the ten hotels that already provide services in Cayo Coco and Cayo Guillermo. The food services―modified according to the new sanitary guidelines and an oasis within the undersupplied island―serve black bread and salmon, exotic for Cubans, but common on Slavic tables.

At night the loudspeakers alternate salsa and reggaeton with hits that were heard a few years ago in Moscow discos, and many of the staff speak Pushkin’s language fluently, learned in their years as students at Soviet universities.

Russia is one of the fastest growing emitters in recent years, to the point that at the beginning of 2020 it registered an increase of more than 45% and had already displaced the United States as the third source of tourists to the Caribbean country.

At the Memories Flamenco Beach Resort, a five-star hotel of the Canadian chain Blue Diamond, Russians are the majority.

“We see great positivity in customer feedback. We try to offer a pleasant stay while respecting the safety and hygiene standards, which is now the most important thing,” assured its general manager, Alejandro Jaime.

For Valentina, a 42-year-old from Petersburg, the care and conditions have been “what I expected.” A regular in the keys, she admits that she misses being able to go out on the mainland and visit cities such as colonial Trinidad or nearby Camagüey, but “it’s not so bad in the pool,” she jokes.

In the absence of excursions, agencies such as Ecotur have designed circuits within the “bubble,” such as speedboat or catamaran rides and tours of nature reserves.

The lure “is the tranquility, the beaches, the opportunity to go diving and fishing,” Julio Antonio Laborit, one of the agency’s tour guides, explains to EFE. “Now we try to vary the offers because for security reasons we cannot go out and we have had great acceptance,” he says.

“We have a responsibility to take care of ourselves. There is always fear. We hang out with tourists and you don’t know who can have it. That’s why we are extremely cautious,” insists Laborit, “happy to be back” after months of hiatus in which, like thousands of his colleagues, he supported house-to-house screenings in search of coronavirus cases.

A cup of coffee with Alicia: The memories, dreams and secrets of Ana Fidelia Quirós