This Thursday, the ashes of the famous Historian of the Cuban capital received the last tribute from the people of Havana, from all Cubans. 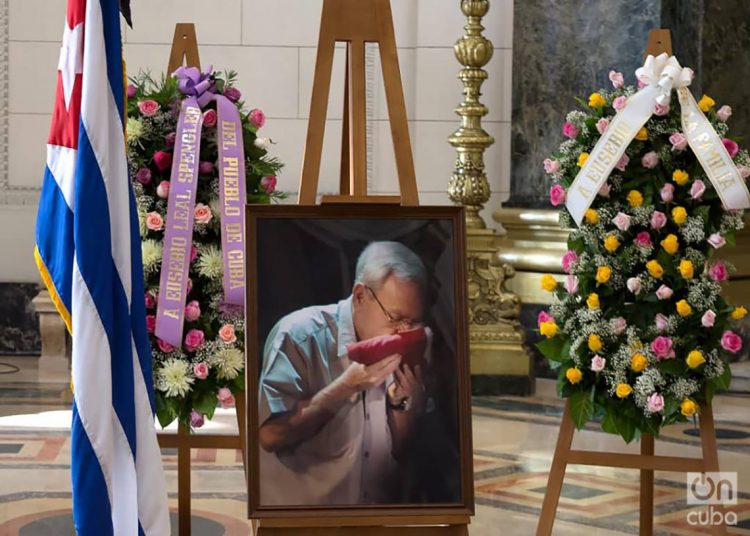 The death of Dr. Eusebio Leal on July 31 left Havana orphaned, the city to which he consecrated his life and that this Thursday, as a full tribute to his work, went to give him his choral and at the same time intimate goodbye at the National Capitol.

There, in the monumental building that he got to see restored, in the symbolic Hall of Lost Steps, at the foot of the gleaming statue of the Republic, his ashes received the last tribute from the people of Havana, from all Cubans. Floral wreaths, the national ensign and a beautiful portrait of he who was and will always be for many the Historian of Havana, he who devoutly kisses the Cuban flag, accompanied his remains, while thousands of people passed in front of his ashes in silence, sad, grateful, moved.

From great artists and figures of the country’s public life to students and humble workers, townspeople, came this December 17 to say goodbye to Eusebio. Loyal to Leal―as the Office of the City Historian named the campaign for the 501st anniversary of the Cuban capital―women and men, young and old, joined in a line that went around the Capitol until it went inside, in the midst of an organized security mechanism in which the necessary measures for the prevention of COVID-19 were not lacking.

It was precisely the coronavirus pandemic that prevented Leal’s funeral services from being held after his death, and although now the island is experiencing an upturn in cases―many of them imported after the opening of the borders―the Cuban authorities did not want 2020 to end without the famous intellectual having the deserved goodbye.

1. Pianist José María Vitier and his wife, artist Silvia Rodríguez, at the funeral service for City of Havana Historian Eusebio Leal, in the National Capitol, on December 17, 2020. Photo: Otmaro Rodríguez.

3. Singer-songwriter Silvio Rodríguez (c) and his wife, flutist Niurka González, at the funeral honors for City of Havana Historian Eusebio Leal, in the National Capitol, on December 17, 2020. Photo: Otmaro Rodríguez.

Neither did Adolfo, a retired teacher, who waited for months for the announcement of the historian’s public farewell and who this Thursday arrived by his means to the Capitol from the distant municipality of Marianao, because, he tells OnCuba, “Eusebio did a lot for this city, so that it be more beautiful and known in the world, and we Havanans will always be in debt to him for this.”

Carla and Alberto, a young couple who went to honor Leal along with a group of their classmates from the University, are of the same opinion.

“We grew up hearing his name, hearing our parents talk about him, watching him on television,” explains Carla, who lives in Old Havana, “and although we did not live part of his work, we do know the greatness of everything he did. because that stays here in the city, in its buildings, in its monuments, and also in its people.”

For Alberto, for his part, the respect and affection that Leal deserved from so many people says more than any material legacy: “It’s incredible that people from such different origins and trades feel and express such great admiration and affection for the same person. Eusebio knew how to earn that feeling with his work, with his intelligence and his commitment to Havana. People knew that his love for the city was real and that it pained him when things didn’t go the best way. That is why they listened to him and loved him so much.”

Also present at the tribute were the members of “Habana 500. Loyal to Leal,” a Facebook group created in the wake of the half millennium of the Cuban capital and which unites it, according to its own members―among which there are people of all ages and professions―, “love for the city.” Because of that love, they not only maintain a systematic activity on social networks but also coordinate joint actions with the Office of the Historian of Havana.

This was explained to OnCuba by Mabel, a construction engineering and design worker at the OSDE, who emphasizes that one of her main objectives is to “convey to others the need to take care of all this heritage that has been bequeathed to us.” Therefore, she said, they considered it necessary to be at Leal’s farewell, because “it was a duty, a duty with a person who dedicated his intelligence, his time, and dedicated his life to recovering the heritage not only of Havana but of the entire nation.”

Her words are supported by her colleagues, among whom is Raquel, a worker from the Puerto Rico mission in Cuba. In her opinion, at the funeral service this Thursday “everything has gone well, with good organization.”

“Many people have come, because Havana and all Cubans in general loved Leal,” she points out. “He was a very loved man, much admired in life, and now all that affection is manifested in this influx of people who came to the Capitol to say goodbye to him.”

After the public funeral services on December 17―a day, moreover, of great symbolism for being the day of San Lázaro, deeply rooted among Cubans, and six years after the joint announcement of the “thaw” between Cuba and the United States by former presidents Raúl Castro and Barack Obama―, this Friday the official mourning farewell will take place, with the presence of Cuban state and government leaders, guests of the Historian’s Office and other personalities and friends.

In the afternoon and in a family ceremony, the burial of his remains will take place in the Convent of San Francisco de Asís, in the square by the same name in the historic center of Havana. But, beyond the place of his eternal rest, because of his work and his enormous legacy, Leal will forever have a privileged place in the heart of Havana.