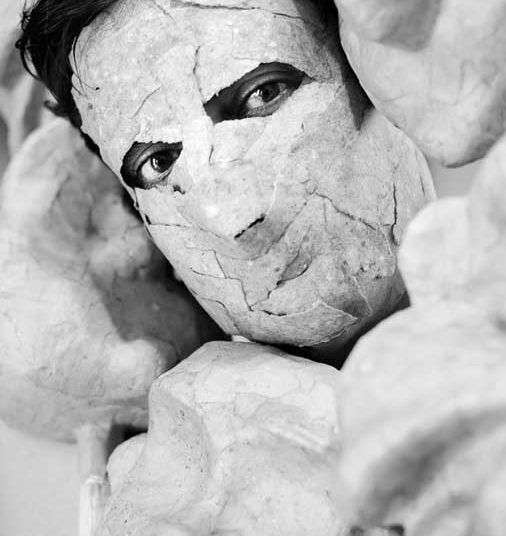 My name is Arneldy Cejas Herrera and I am a puppeteer with the Teatro La Proa theater group. My family does not have any other artists, much less puppeteers, but my maternal grandparents used to regale me with their life experiences, which was useful for me as a creator. My grandmother would tell me stories, décimas (sung poems) and the histories of country folk and the countryside. Sometimes they were made up and sometimes they were very serious, but they sparked my imagination. Seated behind her sewing machine while she talked to me, she inadvertently taught me how to sew, and thanks to her, I now make the clothing for my puppets.

My grandfather had incredible manual abilities and he used to work wonders with the few tools that he had. My first toy puppet was a cow. When its cloth became disintegrated from so much use, he made a wooden body for it and converted it into an ox with its own ox-cart and everything. Recently, for my most recent play, I made an ox-cart just like that one. Many years have gone by, but my memory always takes me back to childhood, which nourishes me when I want to become a child again.

Even though my diploma says “Actor for Children’s and Puppet Theater,” I feel like a puppeteer, given that I have worked more with puppets than not during my 21-year professional career. Puppets have captivated me. Most puppeteers can act in any genre, but not every actor can be a puppeteer. This is a specialty. A puppeteer should be able to dominate his or her body, voice and emotions, and be able to transmit them to the inanimate body of any object, making it into a living puppet.

As a child growing up in Cabaiguán, I wanted to be a circus artist. They were the only artists who visited my town every summer. I used to go to their shows over and over. After the circus would leave town, my little friends from the neighborhood and I would set up tents, and I would put together shows with clowns, trapeze artists, and magic. The now-defunct Atenas circus from Matanzas was the one that visited us the most. I studied agronomy, even though I knew it was not my future. I started out making promotional posters for plays by an amateur theater group in the city of Matanzas. After that, the Teatro Papalote group needed a sign-maker, and that’s where I went, at a friend’s suggestion. Teatro Papalote was a real school for me. I went from being their sign-maker to a stagehand, and then I was a propman, and finally, I was evaluated as an actor. Fortunately, this whole journey has helped me to understand the theater better.

Puppets have the advantage of doing things that not even the best actor can do, such as pulling off their heads, taking apart their bodies, suddenly growing or shrinking, transforming into anything you want, using animals of all types and having them talk and communicate with each other… These are possibilities that you have to use. Moreover, they produce the magic of children’s smiles, which is what encourages you and pushes you to get out on stage even when you don’t feel like it.

Playing with dolls may seem like a game in which we can turn into any character onstage, but I do it with the utmost seriousness and the greatest respect. After my family, there is nothing more important to me. I myself design and build the sets and the puppets for all of my group’s plays; I feel less like an artisan and more like the father of those dolls. When I am working on them, all I do is think about them until I finish, and once they’re done, I take care of them and defend them like a father does his children.