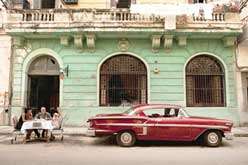 Seventeen years ago, Michel Miglis came to Havana. A Swedish friend had invited him to work on a documentary about Gregorio Fuentes, the former captain of Ernest Hemingway’s boat. At the time, Miglis was living in Jamaica and working as a photographer, producer and musical director. Cuban would be another of his many destinations, he thought.

As a child, Miglis had traveled all over Europe and Africa with his parents, authentic hippies who had journed around the world by car in the 1970s, listening to the Beatles and Elvis Presley. His mother is originally from Gotland, a small island in Sweden, and his father is Greek. Every year, they would spend time in Rodas, where the family had a restaurant that was very popular among artists. If you ask him now about the celebrities who used to go to his house, he smiles, because he probably has some very good stories to tell but prefers not to; for example, you can infer that something happened between his father and Cher.

Miglis studied chemical engineering but never worked in that profession. When his parents got tired of being on the road, they told him that he should do what they had done, because a free man’s country is the world. So he shouldered his backpack and headed off to the place he’d never been: America.

He came to Havana in 1996, at the age of 27, when Cuba was still going through the harshest period of the 1990s economic crisis. The taxi that picked him up at the airport dropped him off at the Hotel Deauville. It was night and it was raining. From the building right in front of the hotel, some men called out to him, and for a moment, he thought that Centro Habana was like Kingston, and that maybe those people would harm him somehow; and that might have been the case, but not this time. The men invited him to have a drink of rum. A week later, Miglis telephoned his mother and told her that he had finally found his place in the world.

For a number of years, he devoted himself to filming music videos in Havana for musicians like Jimmy Cliff, The Rasmus, and Arash Labaf. That was just one of his jobs, because he also traveled around the island discovering musical talent. He was the one who coined the term “Cubatón” with a reggaeton CD, Reguetón a lo cubano, that he recorded under Cuba’s Artex label.

One of the songs on that CD is “El Chupa Chupa,” which he did with El Médico, a young man who had recently earned his medical degree and who Miglis found in El Oro, a rural community in Granma province. “El Chupa Chupa” was unquestionably the most popular song on that CD (it made number eight on the national radio charts in Spain), and it helped the CD sell more than one million copies in Europe.

Currently, he lives in Centro Habana, and like his parents, he has made his home into a restaurant. Casa Miglis employs his friends from the neighborhood, almost all of them young men to whom he has taught the secrets of Scandinavian cooking. Every three months, he invites a Swedish chef to spend some time on the island and adjust the recipes to Cuban ingredients. It was just a year ago that he opened the restaurant with his Cuban wife. Now they are working to make Casa Miglis into a cultural center, just like his family’s home on the island of Rodas, he says.