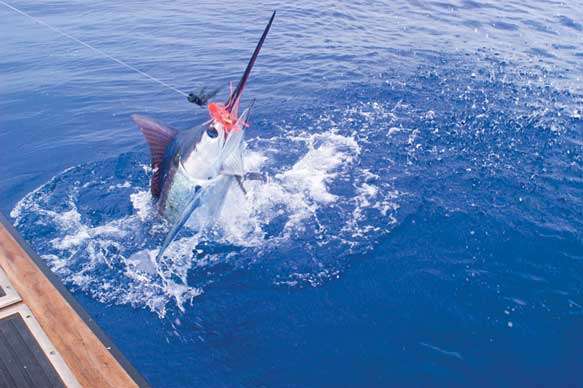 Here in this same sea, under this same sun, Ernest Hemingway used to fish decades ago. Everybody knows that the wildly popular writer from the United States was also a man who enjoyed intense adventures. Fishing for different types of marlin, or billfish, was one of his passions during the years that he lived in Cuba. That love inspired his beloved novella The Old Man and the Sea, and it also helped bring about one of the oldest and most reputable international fishing tournaments, which bears his name.

The tournament’s 63rd edition is set to begin on May 20 at Havana’s Marina Hemingway, and fishing enthusiasts from different countries (in teams of up to four) will have the opportunity of accumulating points for the IGFA Offshore World Championship.

Some things have changed since the years when Hemingway participated in and sponsored the tournament. The billfish population has shrunk considerably, making it necessary to help preserve these species. Therefore, the Havana tournament uses the “tag and release” method (placing a tag on and then releasing the prey), with the corresponding digital photos that accredit the procedure. In this year’s tournament, participants will begin using biodegradable circular hooks, which are less harmful to the fish, thanks to collaboration between the International Game Fish Association, the tournament’s organizing committee, and the Cuban Federation of Sport Fishing (the body that endorses the tournament under the category of “International Open” and oversees the competition with the Trolling system).

In addition to the first, second and third place (which include medals for fishermen/women and trophies for the teams), prizes will be awarded for the first catch and for the largest Dorado.

The Ernest Hemingway Billfish Tournament is endorsed by international sport fishing authorities, and its ranking has been established for some time. Traditionally, its principal market has been the United States and other countries in the region, although European fishing enthusiasts have participated in significant numbers in recent years. In fact, a French team has been the top winner of the last four tournaments. For three of those victories, the boat’s skipper was Jorge Yuvero, a former sailor.

“The boat’s skipper is the one who oversees all of the organizational aspects. He has to be attentive during the whole process, because he has a more complete view of the situation. He should always try to make sure that the fishing line is taut and in the right direction. That is achieved with the boat’s movements. As I always say, the fishermen are the soul of the tournament, but they wouldn’t be able to do much without their skippers.”

Yuvero is a multifaceted man. In addition to his work at sea, he is a painting enthusiast; he creates all of the paintings that are used to promote the tournament and that are presented to its winners. “When people see my work, sometimes they think that I’m a biologist, because of the accuracy with which I recreate the marlin’s environment and the whole fishing process. However, all I’ve ever really done is observe; and moreover, this world of the sea and fishing is my life.”

That cultural aspect has always distinguished this sporting event through the years. Héctor Asensio, commercial director of the Residencial Marina Hemingway, is very clear about that: “We propose an experience for participants that will go beyond the competition itself. We invite them to have an adventure at sea, with all of the hospitality and with the attraction of evoking Hemingway’s exploits in these waters.”

The International Billfish Tournament concludes on May 25. For more information, see: www.internationalhemingwaytournamet.com