Adela Legrá: “For me, nothing is impossible” 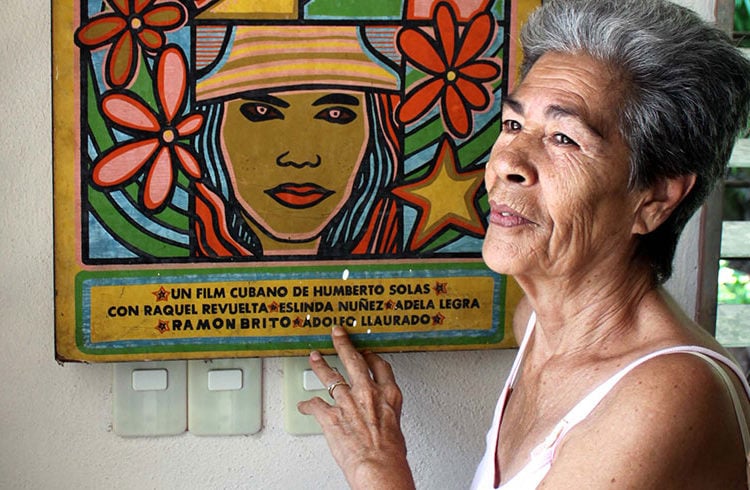 Forty-eight years have elapsed since Adela Legrá debuted in Cuban cinema. Despite the time, this woman smiles with the same intensity as she did in “Manuela” (1966) and “Lucía” (1968) on celluloid, characters that made her, once and forever, an icon of national cinematography.

The director Humberto Solás traveled throughout the island looking for a character with certain physical characteristics for his film “Manuela”. It was in Baracoa (Guantánamo) where he met the exotic beauty and miscegenation of this woman who captivated him, he betted on her and managed to extract her surprising histrionic qualities.

Adela, according to Humberto, is an actress capable of extraordinary animal catharsis, full of light and of an overwhelming sincerity.

At home, a sort of spiritual retreat, surrounded by flowers and fruit trees (in the Cuabitas neighborhood, 7 kilometers from the city of Santiago de Cuba) Adelaida López Legrá told OnCuba how unwittingly she became one of the iconic actresses of Cuban cinema.

¿Adela, how do you remember your first meeting with Humberto Solás in Baracoa?

The first meeting with Humberto was not very nice. I worked as an activist of the Federation of Cuban Women (FMC), and a companion had warned him that I was not easy, that to earn my trust he should challenge me, and that’s what he did. He challenged me to ask if I dared to perform. I asked if the actresses were human like me or were supernatural. He said they were human but professional. I told him that whatever any woman did and was useful to society, it was not impossible for me to do. For me nothing is impossible.

Sometimes it has been said that Humberto and you were two indomitable. Tell me some on the actor-director relationship during filming

I do not like people to govern me. I never liked the impositions. That’s not in my nature. Humberto tried to impose on me and I was not very easy to master. I was not, I’m not. Later I got a little easier; I raised my level of education and culture, and thus improved a little on my character. However, when we filmed “Manuela” for me to achieve certain attitude in a scene, he infuriated me, slapped me in the face, and I replied in kind until we rolled across the floor.

A makeup assistant, sister of actress Idalia Andreus, said she was quitting because she could not stand such disrespect. Humberto told her it was part of our working system and that we would not give it up. Then she realized that this was how we understood each other, and that’s how Humberto and me started working.

The actors and actresses have their ways of interpreting the characters according to what was stated in the script. How do you do it?

I read the script and Humberto always told me what he wanted from me and how he wanted it. In “Manuela” I read the script but did not understand anything, and that was the cause of the discussions between him and me. Despite being brave and have assumed that, I was very young and did not know how to deal with this phenomenon. Thanks to Adolfo (Llauradó) who was an incredible human being and excellent actor, that in the breaks explained me how to do best what I had to do, without stopping being me.

Adela, you said Adolfo Llauradó meant a lot to you. How do you remember him?

I have great friends, well, I had. But as Humberto Solás and Adolfo Llauradó none. They were my confidants, my friends, my brothers, my parents. Despite the fact they always said they were younger than me, but that was how I felt. We did not see each other often, but in the distance we were well connected. In all significant dates or when I had a problem, there was always a communication, advice, and from their suggestions I drew my conclusions. Adolfo was the one who instilled in me the habit of reading. He taught me to read everything, talked about many subjects, we also argued a lot. Moreover, near the end of the life of Humberto, when we looked at each other, I knew what he wanted and he what I would do.

You once said “Manuela” is what you wanted to be, that doing ​​her made you feel as a real guerrilla.

Manuela is my favorite character. Not because it was the first, but because it got to me. Indeed, Manuela’s what I wanted to be. I would have liked to be a real fighter. No underground, but at the forefront. The story of the film is based on true Manuela, who was raised in the hills of the Eastern Front II, but in real life the two die, she and her lover, not only her as in the film.

How did you feel when you saw yourself on the big screen for the first time?

I myself did not believe it. At first I did not understand how I could be there, but then assumed, as one assumes you are in a large picture hanging on the wall. But my kids did not see it that way. They were very young when I took them to the movies and as Manuela dies at the end, I had to take my second daughter to he hospital since she did not understand that I was still alive, because to her, the image that remained was of her dead mother.

You lived over thirty years in Havana. What made you come back?

I never adapted to Havana. My friends there asked me if I was crazy, here I would be away from film, the directors, but I did not care. Whoever wanted me, looked for me. I’ve always said that from Camagüey to here, is my land. Being from Guantánamo, I preferred to be in the middle, and Santiago treated me like a daughter and I will not move from here.

When there was talking about the third “Lucia” of the film, many invoke Lucia with straw hat, towel around the face and defiant look. Is there any story behind that look?

We were shooting on the salt mines in Nuevitas (Camagüey), and the conditions were deplorable for the whole crew and the actors. We were supposed to be only twenty four hours and were there for more than forty-eight. After a long night, we would film one of the final scenes in the morning.

Humberto wanted me angry and told me to run to be panting. I started running until I passed out, thanks God they were following me and pulled me out of the water, otherwise I would have drowned. To dry my hair and protect from the sun, that was really hard, I wrapped myself in the towel and put the hat on. Everyone was ready to shoot and when the makeup artist approached me, Humberto yells her not to touch me, leave me so, and orders to start filming. I wanted to eat him alive and the look I gave him was for his neck. It was not for Adolfo. That is how Humberto achieved the take he wanted.

Why “Honey for Oshun” is your second Lucia?

After they dressed me for the shooting of the first scene of the movie, I had not read the script yet. I turned around and told Humberto: This is Lucia! I felt it that way. Humberto told me it was a kind of homage, but I also felt it was related to those who were victims of Operation Pedro Pan. It’s like a continuation of Lucia, where it faces it from the female perspective, conflicts arising at the beginning the triumph of the Revolution.

After your cameo in the film “Amor Crónico” (2010) and the documentary “Santiago y la Virgen en la Fiesta del Fuego”, directed by Jorge Perugorría, have you participated in another recently?

I participated in a film called “Siervos” from director Jose Armando Estrada Hernandez. I also worked on one that I liked a lot of TV Serrana, “Al borde del Río” based on the documentary “The Four Sisters” (1998).

Any character you would have liked to play?

I always wanted to play the life of Celia Sanchez, but I cannot do it obviously. I also wish to interpret the life of Frida Kahlo. However, if my health allows me, I am ready to continue making films.

Adela Legrá at home, a sort of spiritual retreat, surrounded by flowers and fruit trees, in Santiago de Cuba.

Rusney Castillo makes his debut in the MLB