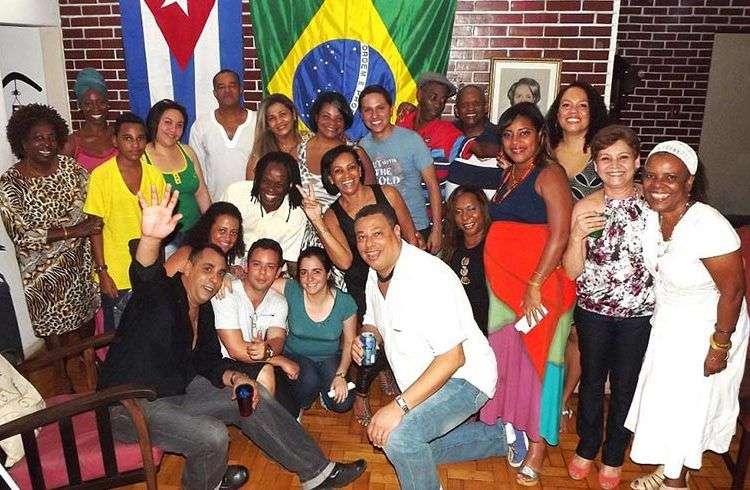 Fernando Calderon Boris worked in Cuba on community cultural development, specifically in the municipalities of Cerro and Centro Habana. His natural environment, however, has always been the kitchen. He is a renowned Chef formed in 1994 by the School of Higher Studies in Hotel and Tourism in Havana and has been awarded in international first class events.

Calderon is also a student of Anthropology and has been engaged in research on the influence of sacred meals in the formation of the culinary heritage of countries belonging to the African Diaspora in America, Brazil and Cuba, specifically Yoruba origin groups, work for which he was recognized by UNESCO in 1999.

These experiences as a cultural promoter, Chef and researcher led him to found, along with journalist Eliana Alves Sotos, the ” Consulado Cultural Cubano en el Maracana”, in the city of Rio de Janeiro.

What is the Consulado Cultural Cubano, what does it do?

The Consulado Cultural Cubano en el Maracaná is a project of cultural and artistic exchange created by the journalist Eliana Alves Sotos, which has as main objectives to stimulate exchange between Cuban and Brazilian peoples, as well as keep alive the traditions of the Island among Cubans living in the city of Rio de Janeiro. It has its origins in the fact that when I came to this city I felt Cubans were completely dispersed. With the creation of the Consulado Cultural Cubano slowly we have been forming a larger community every day and more inclusive.

Why the name Consulado Cultural Cubano?

The name “consulate” responds to the type of relationship that we want to encourage, where security, harmony and diplomacy are the core values. It is then a consulate that hosts fondly, friendship and love to all our compatriots with whom we share the fact of being far from home and family.

With regard to your work as a Chef in Brazil, what seasonings were added to the Cuban dishes? What have you learned from Brazilian cuisine that now allows you to say, “this mixture is superior to both cuisines on their own”?

The “Fusion Cuisine” call allows the mixture of seasonings and ingredients from different cuisines from anywhere in the world. The wealth of the Brazilian regional cuisine is unmatched and being our ethnic cuisines from the African Diaspora, of almost common origin allows Cuban chefs use delicious combinations. Thus, ingredients like beef jerky, and Calabrian linguiça and paio, especially used in the famous “Feijoada Brasileira”, are now part of my culinary proposal for the development of our traditional black bean soup, giving it a fantastic twist in flavor and taste without losing it the Cuban identity.

In restaurants that you have directed, do people often order Cuban food?

Cuban cuisine enjoys a wide acceptance among the Brazilian population for its resemblance to the cuisine of Minas Gerais, among other regions of Brazil. Since arriving in the year 2001 and my work on the “Isla de Cuba” restaurant in the city of San Pablo, with an absolutely insular menu, and various international gastronomic events in which I participated, I always carry the Cuban cuisine, now enriched by the presence and touch of elements of Brazilian cuisine.

In Cuba we love to eat, but usually do not know the origin of the dishes. Which would those dishes or recipes from Africa be that we think are Cuban or other places and we love?

The cuisine of African origin in Cuba, and note that I say origin and not African, is one of the great legacy intangible heritages of those wonderful people. Dishes belonging to the “cuisine to pray to the Orishas” were restricted to sacred spaces with the end of slavery in the Greater Antilles, as free chefs and cooks, did not go to the streets and squares to sell their meals. Some of these workings, with a huge black participation, became part of the “local food”.

That is why in Cuban cuisine we don’t see “calulos”, “batapá”, “acarajé”, etc. Inthe case of Brazil, we find them as a culinary proposal of great demandin citiesmostly black or of African descents as in the city ofSalvador de Bahia. Moredishes withpork, goat, ram, boiledbananas, meat soups, among others, takethe special touch and the unmatched processing technique of the culinary traditions ofthe African heritage.

Could you talk about a”cuisineof resistance”, when trying to explain how people in Cuba alter recipes, cooking with what they canand the foodis still delicious?

Almost always the wars that unleash major famines, along with the devastatingcataclysms, bring along the “cuisineof resistance” in the absence of conventional foods. In the case of Cuba, the cuisine of resistance, in the opinion of historian semerged in the year 1868 and consecrated during the long period of liberation struggles.

The subtlety, ingenuity, creativity of Cubans allowed them to invent new recipes of totally different countries of origin, with the use of spices and ingredients belonging to the insular agriculture.

Closer in time, and the product of economic necessity, new elaborations would emerge as a show of that power of popular resistance, in my opinion, is one of the great contributions of the cooks and the Cuban population to the cuisine, where the main proposal is the mixture and subtlety of flavors.

What would you recommend cooking to those living outside Cuba, to not forget the Cuban food?

I would recommend especially: pork, rice and black beans, white rice, black beans soup, Moors and Christians, plantains and avocado salad to keep the custom, of course, in those countries where the fruit is sold in the market.

But I’m a vegetarian, what you advise me personally?

I would suggest to you foods based on unmodified soybeans, fruit and vegetables without toxic or chemicals in their production, of course.

Now a couple of personal questions: What´s your food to start the day and to finish it?

I prefer to start each day with a tomato juice and toast with unsalted butter. To end the day, chicken soup or mixed vegetable juice.

If someone searched for you as a consultant to open a restaurant in Havana, after so many years living in Brazil, would you accept?

I’m Cuban and I love that island. There my ancestors rest, I never became a Brazilian citizen, because one day, I do not know when, I want to walk the streets of my Havana again. If you hear of someone who wants to open a Cuban restaurant with subtle Brazilian touch let me know, I’m always ready to go.

Cubans in the Japanese radar