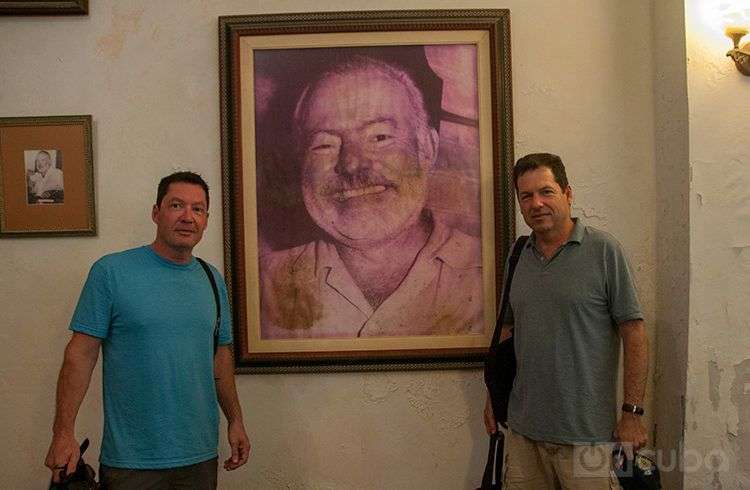 Hemingway arrived in Cuba on a boat, as it were a premonition of the relationship he later established with one of his most assiduous passions. Then in his house Finca Vigia, the man who traveled the world in search of adventure found refuge in the tranquility of a suburb of Havana.

It was 1932 and Ernest carried behind a war and several novels when the boat Pilar entered Cuban waters. Since then much has changed in Cuba, but the memory of Papa still walks Cojimar as John and Patrick Hemingway, the two grandsons of a man who mixed his writing in impeccable English with vapors of the tropics and the pidgin Spanish of the fishermen with whom he shared his time on this island, could experience in their own flesh.

For Patrick this is the fifth visit to the country, but for John is the first and he has felt the affection of Cubans toward Hemingway, perhaps by that emotion he always responds first to this conversation with OnCuba held in the lobby of the Ambos Mundos Hotel: “Actually, we could not really tour the city in all its magnitude because we’ve been back and forth participating in many other activities, but in all the places we visited we have noticed how much people still admire and love our grandfather. ”

How was the experience of visiting all these places that keep the footprint of Hemingway in Cuba and what has the reaction of the people been?

Patrick: “We always knew that in more traditional places for him like Finca Vigia, the Floridita, the Bodeguita del Medio and in this same hotel where my grandfather spent part of his life, people would see us as his grandchildren and be happy for that but what impressed us greatly is how the rest of the places in this city, many of which he did not even visit, people have welcomed us in the same way.

“They treat us like celebrities and we feel very good about that.”

How much has this trip enriched the memories you had of your grandfather?

Patrick: “We have previously been to other countries like France, Italy, and Spain … where he also left his trail, but this visit helped us complete the picture we had of his life, the things he did, the love that he received”.

After five intense days in the Hemingway International Yacht Club, the Finca Vigia Museum and the Center for Marine Research at the University of Havana, Patrick discusses his views on some of these activities: “When we sailed towards the coastal town of Cojimar-recreated in his book the Old Man and the Sea, we thought it would be a short stay, accompanied perhaps by some lunch and a couple of beers, but the fact is when we landed there were 20 fishermen waiting with their fleet of boats and other 300 people that gave us a very warm welcome. Another moment that was overly impressive was when we touch with our own hands his Nobel Prize medal brought especially from the Shrine of Our Lady of Charity in Santiago de Cuba for the 60th anniversary of the award. That feeling we had to have it in our hands is indescribable. ”

Undoubtedly Hemingway represents a cultural reference for both Cuba and the United States, do you think this visit will serve as a bridge between the two countries?

Patrick: “In my five trips to Cuba I have never heard anyone speak against the United States. In my opinion, without getting into politics, right now the problem lies in a very small group of Cuban-Americans who are there and do not want to allow that kind of relationship, but fortunately they are already getting old, yet I have many young friends who want reunification and long for that needed rapprochement between the two countries. These days the entire atmosphere is for change. ”

John: “We hope this visit will contribute at least a little to that. If with the work we have been doing we managed to open the door even if it was a tiny bit between the two peoples, we can say that this trip has been a success. ”

And just as ambassadors of that reconciliation Hemingway grandchildren have come in Havana, accompanied by a group of members of the Latin America Working Group Education Washington and the Global Arts / Media New York, especially advocating for a scientific exchange between the two countries that allows them to protect marine species from fishing and pollution.

About the project objectives and outcomes of this meeting with Cuban experts John says:

“We had a very fruitful meeting with marine biologists from both the University of Havana and others and the idea is that everyone here have done extensive research on migratory species such as tuna, marlins, and even sharks, will join the work of this international group studying the Atlantic basin, because in Cuba there are serious studies in this regard and they will favor the entire region. We believe that this visit will generate significant future collaboration.

“If possible we want to donate equipment to make different types of monitoring of fish, which allow, for example, tag a fish and get its DNA, and that data Cuba will send to a laboratory in Miami that can identify how that species migrated. There is another system that we believe can be very useful and is the satellite tagging where through an equipment placed in the fish, you know exactly where the fish moved to, in what place it is and so on “.

What Cuban institutions will be involved in this project?

John: “First, the Ministry of Science Technology and Environment and the Ministry of Fisheries and other scientific centers of the country, but this collaboration will necessarily under the control of the Cuban government because there are some fees that Cuba must pay before to be included in this international group, so it depends on the Cuban government the participation or not of their scientists in the project.”

Amused by curiosity awakened in some Cuban media on the issue of whether or not they could access the logbooks of their grandfather, John jokes, “they should be very interesting because everyone makes us the same question,” and then adds: “The investigation will be made by scientists here that these data will contribute to the international community, but the logbooks are not really a priority for this project. They are available to us because Hemingway collaborated with a Philadelphia institution during the 30s and 40s and they kept those files in their archives, but as I said, that was never in the plans of the trip. The idea was to visit Vigia, the yacht Pilar, see the medal. ”

Carried by the legend itself and heat of this city, John and Patrick paid homage to Hemingway on the 60th anniversary of his Nobel Prize in Literature and 80 of purchasing of his yacht El Pilar, following the same route the writer took in Havana.

After 7 days of activities they say goodbye to the Hotel Ambos Mundos saying they will return to Cuba for the Marlin Fishing Tournament next year, because, especially John shares with the old Hemingway his passion for fishing. Standing on his way to the door, I ask about the possibility of returning to future tributes and John then makes this last reply: “At the meeting we had yesterday at Finca Vigia a group of journalists, writers and intellectuals approached us to tell us that there are many works of Hemingway that have never been published in Cuba because with the death of my father in 1987 these rights were on the other side, so one of the first things we will do upon our return is to talk with our families to reach agreement on those rights because we believe this work is also important for the Cuban people and is also part of their history, because everything Hemingway did in life also belongs to this country. ”