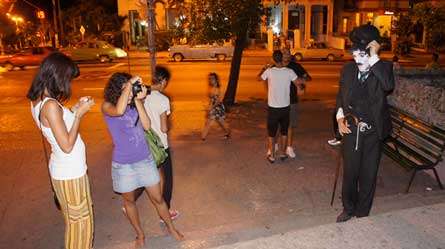 Historically, Havana has been a night owl and a diverse city. For several years, one of the main arteries of the capital the Presidents’ Avenue (also known as G Street) has become an objective for theorists and social researchers.

Every week-end, hundreds of teenagers and young people meet in that space. The most popular groups are the emos, hippies, mickies, repa, punks and metaleros. But among them there are other much more unique classifications: floggers, Gothic, grunges, wolf-men, among others.

Nights usually go by amidst drinks, songs and extensive debates on topics like fashion, music, idols… And in many cases, they end up in large discussions about the philosophy of life defended by the different groups.

According to Roberto, a freaky from G Street, “that street is occupied mainly by the emos. But there are invisible, non-agreed borders that are abided by as laws. G Street, from 23rd to 25 Streets, is the seat of the metaleros; from 19th to 17th Street, of the repa and the mickies; and from 13th to 17th Streets, of the punks. However, no one remains in one place the whole night long, because it is traditional on G Street to wander from one place to another and meet the usual people along the way”.

Even if it’s true that it has been quite a task for many to name, group and define them, as well as to explain, understand, and, in many cases judge them, these young people have evidenced that G Street is an open place, and that even those who do not defend a specific identity have free access to it.

A Cuban at Fenway Park

Ninetieth birthday of the Cuban Radio