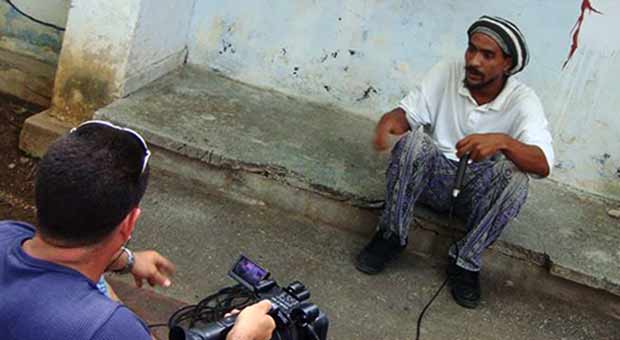 With a cultural reference anchored in the lands of North America and under some European influence on the ways of making, the Cuban project ¨Caminos de Palabras¨ comes to introduce us in an original way and with a Caribbean twist on the still little known world of Spoken Word or Spoken Poetry.

Although this artistic expression emerged decades ago in the New York neighborhood of Harlem and has expanded across continents, it has failed to significantly enter in Cuba and show its potential. That is why this project, recently emerged from the initiative of Cuban poets, pursues joining forces to this type of poetry to permeate Cuban society today and may become a way to channel concerns, reflect mood and help, from art, to find solutions to various problems that surround us.

With a style similar to rap, spoken poetry is executed by artists with a fine sense of aesthetics and has a very peculiar form of manifestation; it aims to reach the public of through an intense and original way, emphasizing the narrative, rather than the rhythms. The secret is on the successful execution of the word.

Speaking to OnCuba, Elier Alvarez (The wizard), director of Caminos de Palabras, highlighted that this group is almost exclusively devoted to the promotion of Spoken Poetry in Cuba, and although they are in a phase of rethinking and first steps, the successes they have gained has been very helpful for him.

“Our starting point was obviously the American Spoken Word , which is an urban movement. From the beginning we tried to investigate the theory, and then we run the artistic part. The latter includes performances, concerts.

“In May 2012 we made an event called Spoken Word, Poets in Havana: poetry, action and words, in the context of the 16th Festival of Poetry in the Cuban capital. We were able to interact with many artists who share our ideas and purposes. We had the presence of Mayda del Valle, who was the first Latin winner of the SlamNation tournament in America. We also brought Paul Flores, recognized university professor of subjects related to Spoken Word and hip hop theater.

“Then, on July that year, we made our first international event called Poetry Zones, and we have already made two editions. It was great to have the presence of one of the greatest American poets: Aja Monet, a third generation Cuban.

Had she ever been in Cuba?

No. It was the first time she did it and admits that it was shocking. Her family was mainly from Santiago de Cuba and Guantanamo. It was something cute. She wrote a poem that is a compliment to us: Dear Revolution, I am your granddaughter. That was also the name she gave to her first performance, which she makes alone in the United States. It gave us joy from the social and socio-cultural point of view.

The events have also been attended by Sarah Camilla and Serge Balita, both from Norway, Youness Mernissi, from Belgium, Queen Nzinga, from Costa Rica, Cristian Forte, from Argentina, among others.

How has been the participation of Cuban poets in those festivals?

It has been extraordinary, because not only poets emerged in Cuba within the bosom of the hip hop culture had visited us, but also representatives of Cuban country music nationwide.

To what extent have these events been useful to be more publicized?

The festivals have allowed us to define the needs of Cuban poets and to project us towards a higher level of professionalism. They h ave also helped us to think about how to continue expanding the promotion of the group and the poets to come to live in better conditions, they are not amateurs and have families to support.

I think we should look for mechanisms that involve marketing and socialization under the social conditions in which we live. We do not want to lose sight also of the socio-cultural fact.

What type of activities does ¨Caminos de Palabras¨ currently performs?

We make constant activities, with economic constraints, because we do not work with sponsoring institutions. We intend to make a Spoken Poetry club, in the neighborhood of Pilar-Atarés. That place does not have an extraordinary cultural beauty, but allows developing that urban area and make money.

We are also finishing the editing of a DVD, because we had many videos, but not a full audiovisual. We want to launch a show, with a very high professional level, and a not-boring aesthetic to satisfy the requirements of a DVD.

What is the hallmark of Spoken Poetry?

Spoken Poetry, unlike rap, has an emotional charge and a social conscience. It is critical and suggests remedies as a form of art. That is, it gives options and answers to problems of society. The poet writes about what is happening, maintains in dialogue with the reality that surrounds him, and intends the information not to remain only at media level. They study the fact in depth. The Spoken Poetry, then, is a very interesting proposal because people get much reflected on it.

El Vedado in a book