by Abraham Jiménez Enoa
in Music
0 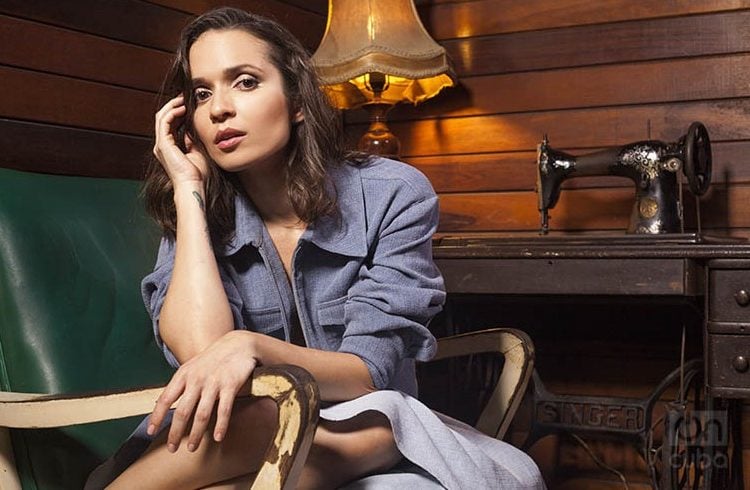 Diana Fuentes does not strain her voice. She doesn’t stammer when she speaks. She doesn’t wear earrings or any type of makeup, she doesn’t use lipstick and if she does it’s the same color as her lips. Her face doesn’t need it; her face is so sublime that any touching up would ruin it.

Diana Fuentes is slim. Much slimmer than what people imagine. And that slimness fits perfectly well with her short and simple dress; a red dress that leaves her back bare, and reveals from start to end her very white legs standing on wood platform shoes that martially correct her posture.

Diana Fuentes has black hair that falls over her shoulders without completely covering them. She also has two tattoos. The one on her right hand is a bunch of aurora flowers, white flowers, flowers to pay tribute to her grandmother Aurora Fernández. The one on her left hand is a tiny star that moves with her pulse, with the disparate circulation of her bluish veins; it is not by chance that it is there: her brother has an identical one, on top of the blood, on the left side, the side of the heart.

Diana Fuentes arrives with her husband Eduardo Cabra through the stairway after climbing nine floors to avoid an elevator. Eduardo, a visitor from Calle 13, is serious, shakes hands and gives a kind greeting, but he is serious. He is wearing his usual cap and a backpack with a laptop. Cabra, serious, is going to connect through the magazine’s WiFi. Diana and I are going to talk.

How was that, your first performance on the stage accompanied by Síntesis, X Alfonso, Carlos Varela and many others?

The opportunity to work with Síntesis appeared when I was still studying choral direction in the National Art School (ENA). They proposed that I accompany them in the recording of a CD and afterwards I stayed with them for six years. During that time I worked a lot with X, I collaborated with Aldo López-Gavilán, David Torrens, Amaury Pérez, Roberto Carcassés, Liuba María Hevia and Carlos Varela, later we would help each other in our projects. Afterwards I met Descemer Bueno, and it was then that I started working on my first record. What I have most taken with me from those years is friendship. I am very fortunate to have such talented friends. It was a super wonderful time, because when things start going well and the wheel starts turning, everything is easier. I am grateful to them for having guided me at the beginning, for having believed in mi, not everyone gives you a hand to get on the train.

Amargo, pero dulce (Bitter, but Sweet) is a rather Anglo-Saxon phonogram, and Planeta Planetario (Global Planet) is definitively more Caribbean, with a greater variety of musical genres. Up to what point has the musical production of your husband Eduardo Cabra had an influence on the differences between one and the other CD?

Eduardo contributed one hundred percent to the change. This second record has more flavor, it is more Latino. It is a record I had to make outside of Cuba and in the process of creation I missed everything. I lacked so many things that I clung to the music and everything came out like that. The first is much more Anglo because it is the music I used to listen to at that time; I love soul, R&B. It also had a bit of ballads and of feeling, but all Anglo-Saxon.

But many critics commented that that record sounds a lot like Calle 13. Is that true?

If I hadn’t revealed who the producer of the record was, they would have talked only of a Caribbean record. That debate and that people give their opinion is really great, everyone is free to have their opinion. What’s important is that the songs are being heard, but I can’t accept that they say there’s an influence of Calle 13 in them, because there isn’t.

Could it be said that Planeta Planetario is a much more eclectic record and that it has a greater textual diversity than Amargo, pero dulce?

In Amargo, pero dulce there are songs I wrote when I was 15, now I’m 31. They are 15 years of experiences and many more things. In the second record there are concerns as a woman, a social being, political, ideological and not just love, although love is an interest that is always in my life.

There’s a great deal of disappointment in your love songs, there’s a lot of suffering…. Have you suffered a lot with your couples?

Like everyone I have fallen in love, I have been cheated on and my heart has been broken. Perhaps I also have cheated on someone. No one is perfect, we learn from our mistakes and also from others’ mistakes. There are many songs and personal stories that touch me very closely and that make me write those lyrics. I am very romantic.

What’s new in the album you are preparing?

It’s a bit of a return to the basic, to what I sang at the beginning, a way of thinking about life, a much simpler record on a textual level and we want to musically cook up something that is new. The record’s first single should come out next August.

You were the second Cuban to be signed on by Sony, before that Celia Cruz was the only one to have achieved that. Do you feel privileged?

It was a great opportunity in my career because of everything implied in being “the new Cuban singer included in the Sony catalogue after Celia Cruz”. That led to the record having a tremendous reception in Colombia, Puerto Rico, Mexico, Venezuela, Europe and in several alternative music festivals in the United States. I’m very happy about having approached Sony to my recording house in Cuba, which is EGREM, and in addition Sony was able to discover a much more extensive catalogue of Cuban artists and that makes me feel like a cultural ambassador between the two recording houses, that is the greatest prize of Planeta Planetario.

You have been building little by little your image without the help of jewelry and makeup, or you have always simply been like that?

That is a problem because everyone wants to always doll me up with hundreds of things. And I believe there is where the image of an artist, of each person, is defined, in what you feel comfortable with what you can add to yourself. I try to always feel comfortable to be able to exteriorize and represent what I want and feeling at ease. There’s already an intention, I am working with several stylists to explore that image. But initially everything was totally spontaneous.

Does the press following your personal life bother you?

I don’t see it as bad. Artists are the owners of what they let others see in their lives and they show what they want. One has to be a bit careful because when you see on the social networks Kim Kardashian in the bathroom, almost naked, saying she doesn’t know what to wear, it seems an exaggeration to me. My husband has suffered that sensationalist impression much more than I have. The foreign press is very aggressive, and even more so with Calle 13. In Cuba those things are familiar and I appreciate them, that way I feel the affection and I like it when they write about my personal issues, as long as they are not invasive, that they do not invade and are disrespectful and the limits remain clear….

After spending many years not singing in Cuba, how did the public receive you during the national tour with Planeta Planetario?

Incredible, it was an incredible thing after so much work. They were spectacular concerts, with full houses, with people waiting for the concert to end to wait for me outside, I felt very happy to hear my songs being sung by so many people, knowing that my music reaches the provinces. It was a great recognition and it’s the most important thing that can happen to me.

“Los caminos” (The Paths), a number dedicated to the deities of the Yoruba pantheon, speaks of your religiosity?

I love Afro-Cuban culture; perhaps at some time in my life I can devote myself to it. I am very spiritual; I believe there’s something that connects us. There’s something more, which is there, which vibrates, which can be felt if you pay attention, if you are alert. I wrote that song with Willliam Vivanco and it is one of the ones that I enjoy the most in the record.

Is the influence of Síntesis there?

Síntesis is a school. All the New Year’s Eves we dance with them at home, we cleanse ourselves with them (laughter). When I started in the group I had to study a great deal, I had to learn all the Yoruba chants, all the pataquíes of each deity. Honor to who deserves honor. Síntesis was a great school in my life.

You’ve been alternating for several years living in Puerto Rico and Cuba. Do you believe Cuba is really changing, that there’s “another reality”, like your song?

There’s another reality, yes there is, but that each person see it as they wish to see it….

How do you imagine Cuba in five years, or how would you like to imagine it?

I hope that what today is a problem is not a problem in five years, I hope that dialogue will always be fundamental for any change, but that it be a dialogue that really brings the possibility of change…that’s what I hope for.