Eduardo Morales: A “Shark” that sings 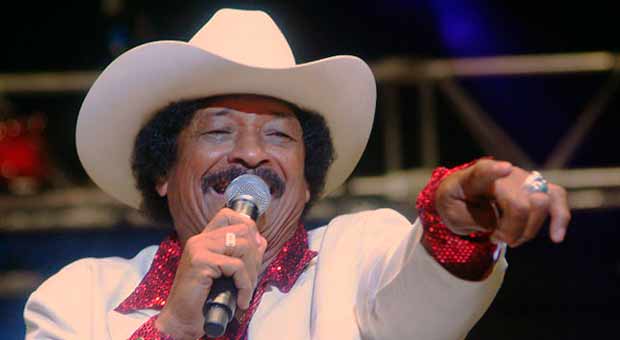 If you walk through the streets of Santiago de Cuba, and sharpen the ear, you can probably hear, beyond the impressive music on fashion, that ancient rhythm that according to some is the most sublime to provide fun to soul. Walking through this city of great troubadours and son players, I found “Tiburon” (Shark), iconic figure of ¨Son 14, ¨ that remarkable orchestra, founded by Master Adalberto Alvarez, that revolutionized the way of making son and seduced many generations, who even today claim to enjoy it. I asked him to talk, and with that so diaphanous way that characterizes him, he invited me to his house that same day.

At 78, the charismatic musician Eduardo “Tiburon” Morales, Son 14 Orchestra leading voice for more than 30 years, talks about the group’s origins and his greatest passion, the Cuban Son.

Tiburon, where is Son 14 band?

They have been in Mexico for some years ago. The musicians come a month to Cuba for vacations and then return there. We’re fine, completing work abroad and working hard there, but we come back and spend the holidays here. I myself am right now here on vacation. Son 14 is alive and well, brother.

Has the group recently recorded an album?

In 2011 we began recording a tribute album to Son 14, entitled “30 Years of Son 14”, produced by Maestro Ricardo Leyva, and with EGREM record label. That work included some of the most popular Cuban musicians: Manolito Simonet, César “Pupy” Pedroso, Pancho Amat, Mayito Rivera , Angel Bonne, among others. We made a son players meeting.

When did you discover that you are more a sonero than a baseball player?

Well I was a sonero and baseball player at a time, people saw that I got up to the stage, listened to the choir and began improvising right there, I invented another chorus over the original one and so on. Then people asked me what I was doing playing baseball if mine was singing. But I really liked baseball.

But eventually the sonero prevailed over baseball

You are right, but also because it was better for me economically because music is paid. At present, the athlete is being more paid attention, but at that time it was not that way. We played for love to the sport and the flag of your area, which in my case was the Camagüey Granjeros team, although I am from Francisco Guayabal, a small town belonging to Las Tunas province.

How was the meeting with Adalberto Alvarez?

It was at “Cándido González” ballpark, in Camagüey. He went there often and heard me singing. One day I told him to give me a chance in the group, because I was told that a member was missing, and that was the start.

So how and when was Son 14 Orchestra born?

Adalberto Álvarez assembled a group in Camagüey with several fellow graduates of music. I remember German from Irakere, and other good musicians. It was a terrible “squad”, but local cultural authorities were not interested at all. Rodulfo Vaillant, composer and by then Director of the Cuban Radio and Television Institute (ICRT by its Sapnish acronym) in Santiago went to Camaguey and met Adalberto who invited him to a concert at Camaguey Beer Factory to listen to the little group ” Avance Juvenil “, which was the name we had at that time. The little group was tremendous orchestra. Then Vaillant convinced Adalberto to come to Santiago. Once here, with musicians from Camaguey and Santiago, on November 11, 1978, Son 14 was officially founded.

How do you remember that first presentation on the streets of St. Ursula here in Santiago, in 1978?

Well that was a major success. When we played that night, people said that now Santiago de Cuba has a worthwhile group. At that time there were several bands but there were not good enough. Son 14 was it because Adalberto is a man of competence, he is not content to take a step and stay there. He gives a step and is willing to give another and another. That is something that has made him great. I thank Santiago de Cuba on behalf of the group because Santiago gave us its full support to start and continue, especially Commander Juan Almeida. He was the one who sent us the instruments so that we could ensemble the band. Through the Ministry of Culture he sent us some baffles. We rehearsed with an old piano that Adalberto had and played in boxes and with that we started the fight. Thanks to Almeida’s redemptive hand, which is something unforgettable, Son 14 started on. When speaking of music in Cuba in the last fifty years, we must talk about Juan Almeida Bosque. When we started in 197 8, that year began a life of glory.

When Adalberto left the group, did he do it by some internal discrepancy?

No. Adalberto had other artistic concerns and he thought it was the time to leave Santiago . Although some members went with him, that was not the end of Son 14. There were no problems between us. We talked and he told me not to leave the band because it was an institution that had its own name and fame and so it has been until today.

Do you maintain any links with Adalberto Álvarez today?

Adalberto is practically my father. I learned a lot from him, not only in music but also in his attitude as a citizen, as a man, as a parent . Adalberto is a worthy example of man. I am faithful imitator of his behavior. Through him I found the way of being a person with more culture, more passivity, a person who knows to be loved by others. Musically speaking, Adalberto is a talent, he made us all musicians.

The album “A Bayamo en Coche” (1980, Areíto record label) was a hit in terms of sales and popularity. In your opinion, which were the reasons for that success?

It was a total success. Largely it was because at that time there was a great influence by foreign music, The Beatles, Los Angeles, Los Diablos, and other famous groups that were heard in the decades of the ’60s and ’70s, but there was no national dance music with the characteristics of that orchestra. And apparently we managed to achieve the “hit”. We were young people playing son, it was a major success.

Years later, Juan Luis Guerra made a version of “A Bayamo en coche” turning it in “A Santiago en Coche” alluding to Santiago de los Caballeros.

Which is Son 14´s hallmark?

What distinguishes Son 14 is that we continue playing as we began. When we’re setting up a song, the requirement when making arrangements is remained, we keep our line, with some jazz harmonies and the use of trombones. Also, we have always been careful with lyrics in the songs, not writing cheap texts, never losing the sense of good lyrics. Those were the lessons that Adalberto left us. That’s why the music of Son 14 likes a lot at international level.

When did Son 14 travel abroad for the first time?

Son 14 travels to Venezuela in 1979 thanks to a businessman named Orlando Montiel. But this was also possible thanks to Mr. Andy Montañez, who in the summer of that year came to Santiago de Cuba with the orchestra Dimension Latina. They played at Guillermón Moncada Stadium and Andy also sang with us and at the end he said it was a shame that a Cuban music band such Son 14 was not going to play to Venezuela, Puerto Rico, or other countries where such music was danced and from there the paperwork for that trip began.

One night in 1983 Oscar D ‘León captivated thousands of people of Santiago at Guillermón Moncada Stadium. Tiburon Morales with Son 14 sang with him. How do you remember that night?

That night was unforgettable. Oscar is a great singer. He still feels love for our country, what happens is that it is not the same living in a country where you have to live with the “knife in the mouth”, if not, you do not eat. However it is not the same here in our nation where you do not have to do that to eat. Life in Cuba is easy in this regard.

Why did you manage to sing with Oscar D ‘León that night?

I had already done it in Venezuela, at Caracas´ Polyhedron three years earlier. We met each other. Son 14 was invited to play with him that night. The two of us began improvising and it was easy. He still invites me to the stage to sing when I’m abroad.

You recently shared with some of the musicians from Puerto Rico Gran Combo here at the Trova House. Talk me about this reunion with old friends.

They are tremendous singers. Charlie Aponte is a terrific singer and a better person. That is why he is in the Gran Combo. Ithier (Rafael), the director, is not a proud or possessed person. He is a noble man and always has a smile for everyone. He was the director of Cortijo and his Combo, and then founded the Gran Combo, which has taken him through successful ways for many years. They love Cuba too much. When speaking of Cuba on the continent, you are talking about the greatest, b oth musically , as in the human factor, and that makes you feel proud of being Cuban.

Many Caribbean musicians and salsa groups recognized in Cuban s on the genesis of all the work they have developed later. Can you comment on this?

I’ll give you an example; recently we were alternating with Roberto Roena ( Puerto Rican bongo player and dancer, member of Cortijo y su Combo, the Gran Combo and founder of Apollo Sound). Before start singing, Roberto, microphone in hand, asked for permission to Cubans because he wanted to earn the meal of his home playing Cuban music . We stand up and applaud. Those words touched us deeply.

Why did n’t Tiburon leave Santiago?

I did not do it because, honestly, if I had gone I would have done nothing; b ecause I would not have had the respect and affection of a people like Santiago’s; t he love of its leaders, love of children, of old people. Everyone calls me on the street and I am proud to be in Santiago de Cuba and especially today that Santiago de Cuba has a leader who feels himself as adopted son of this city… He has even cried when speaking to people. Lázaro Expósito loves Santiago and Santiago loves him. If I didn’t leave when there were leaders who did few for the city, I won’t do it now because currently you can be in Santiago, now there are real executives who know the problems of the people. Today Santiago is more Santiago than ever.

Eduardo, since when did people call you Tiburon?

Since I was a kid. I swam in the beach and opened the mouth and someone said I looked like a little shark.

You have several times said that Son won’t die, what’s your opinion on the different types coexisting with it?

The son can’t die despite new rhythms to emerge. Reggaeton, for example, can’t ever surpass son. We have flag and rhythm, we also have folk that is son, bolero, guaracha, guanguancó, rumba and that will not die.

Thea Hjelmeland: Without music my soul would be poor

The white room of Apatia

The white room of Apatia

The World Music that will move Havana