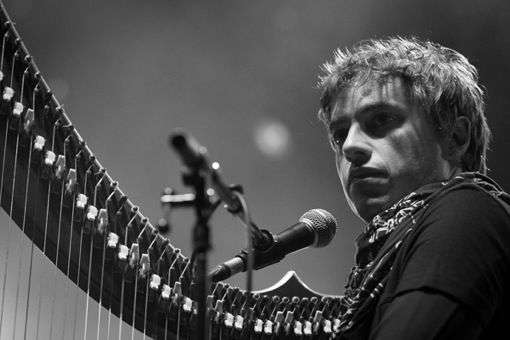 When Roi Casal ended a concert in Buenos Aires, which he described as “tremendous”, his representative in Cuba announced him that he would not only perform in Havana but he would also be presented an International Cubadisco award, which is not a Grammy, but is also a recognition and this Spanish harpist knows that.

Roi Casal is an obstinate sponsor of that ancient music, who is determined to preserve it by adding contemporary elements and making it shine, by taking it to the youth not in conservatoriesbut in night clubs.

“Through music I can learn about the way of thinking, walking, living, eating, and feeling of a people. It is the sum of many cultures that were caught up in Galicia, between the Atlantic and the mountains, filtered by means of a osmosis barrier that allows other elements to enter but not to get out, generating a mixture that makes up Galician music”, explained Casal to OnCuba, a few moments before his concert.

He was born in 1980 in the small town of Catoira, but he came out in the world at the age of 19 as a member of the mythical Spanish band Milladoiro. As teacher he had legendary Rodrigo Romaní, and he was a little boy in a band created one year before his birth. Even so, he adjusted perfectly to them and learned a lot and recorded six albums. However, he had to leave…

“It was not fair I was not able to defend my music. Ethically, I continued to be in tune with Milladorio, but aesthetically I had my own concerns so I decided to go in solitary.In 2009, I released Lendas douradas, with the single Ninfa das Frescas Augas, music for a poem by Rosalía de Castro.”

After that successful debut, he has recorded Maxicamente vello (2011) and Donos do noso destino (2014), which he is promoting today in an international tour. The first stage of the tour ends in Havana, at the Museum of Fine Arts. During his presentation, he will be presented an International Cubadisco award, a surprise that makes him feel grateful.

“I’m aware that this award is recognition for those who try to mark a difference for globalization to standardize everything, and I appreciate that”, noted Casal, who, like a pilgrim, is bringing medieval music to the present.

In fact, some of the instruments sculpted on the front gate of the cathedral in Santiago de Compostela are part of his band, a common pop-rock band enriched with instruments on the verge of extinction, such as the Celt harp, the bouzouki and the zanfona.

Casal explained that Galician music is the result of the geographical isolation of Galicia, where multiple influences came together and melted. “Such isolation has prevented our music from being absorbed by other cultures, which on the contrary nourish it. That’s the reason why, we are not anchored in the past”, he said.

The musician added that his three albums in solitary include traditional ballads and shepherds’ and millers’ songs with lyrics written by him in order to portray Galicia much better. “Our music would not represent us if it were the same than a hundred years ago and beyond: our music is different, it has its own instruments, but Galicia is also modern”, he stated.

Even Casal is not able to classify his music. “I would say it is rather pop than folk, if I get to define it here, I will leave from Cuba with something more than an award”, joked the loquacious interpreter, who would definitely be a writer if he could write with the profusion and coherence of his speech. “Not at all, I’m limited to the lyrics of my songs”, he answers back.

Aware of the fact that for Cubans every Spanish person is Galician, he can understand that there is a historical foundation in that statement. “History brings us together, the Galician flag was designed in Cuba, our hymn was premiered here, and visiting Cuba is inevitable for those of us who feel proud of been Galician”, he affirmed.