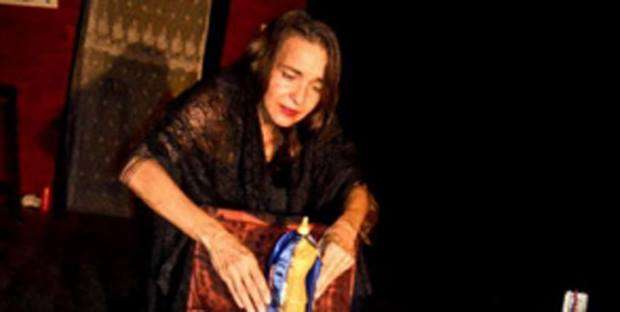 Poem book Hojas de papel volando (Paper sheets flying), by Colombian writer and playwright Patricia Ariza, motivated Santa Clara’s Theater Study, Roxana Pineda, to create a theater piece by the same title, some sort of revelation on her rapprochement to South American life styles not only through her poems but also through her life experiences, which are pretty much the same.

She is dressed in black and she seems to be mourning. She is actually not crying, but she looks sad. She conceals her grimace in wine, and when she feels words are choking her, she just sings in perfect tuning. Her name is Patricia, but it could also be Roxana, or Amanda, or Lucía, or just any woman’s name. Hojas de papel volando is, definitely a feminist poem, always passionate, sometimes nostalgic and free from excess. That is, holding back a feeling that is about to burst, laughter never gets to leave us short of breath; songs only talk about what she needs them to say. Hojas de papel volando is not present in Mayo Teatral to make people reflect, but to provoke them.

Roxana feels Patricia’s hardships and politics. She reads the poem book and crumbles over a table. The stage is taken by a smell of smoked, almost dirty sex, which is recognized in gestures, stances, and is reduced to her seat when a hand puts a knife on her neck and moves it slowly and intimidatingly. Women need to be taken care of, Patricia says, though she is not rid off limitations because even so she has to iron the flags of freedom.

And the whole poem –the piece– is, in my opinion, the result of experimentation and constant search that has characterized Santa Clara’s Theater Study for over 20 years, as described by Roxana, as a rebellious act in rejection of banality, shallowness, and injustice.

I’m sure that Ariza, unable to get rid of artistic sensitivity she puts in her political commitment), recognized herself in Roxana’s desperate face, sweating, evoking a life full of violence, the Patriotic Union party, the subsequent murder of many of its members, her daughter’s exile in Cuba, the guards, the gun in her purse even during shows, depression, and the theater being her only beam of light. “I’m like a three-leg table that is never straight: I’m a feminist, a revolutionary, and an artist. With women I have learned to turn pain into strength in the theater”, she recently stated in an interview for Colombian website No habrá paz sin las mujeres.

The piece isn’t over yet and we feel like we have participated in every fight fought by the character. It is impossible to know how much belongsto Patricia and how muchbelongs to Roxana. The speech, apparently meaningless, is related to the story of a movement, of a nation and of a woman. Roxana herself wrote it in her notes to the program: “I’m still not familiar with the face of this show. It is still foreign to me. However, I do know everything that is not portrayed in the visible image, which makes me hold it tight with all that energy that I want to keep in but bursts anyway”.

Away from Havana, a debate on staying or leaving