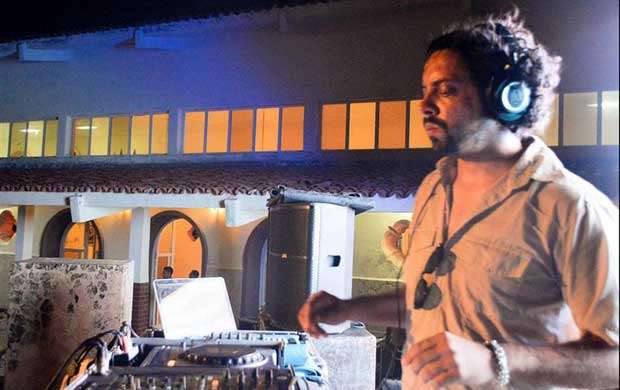 Among the special guests of the first Havana World Music (HWM) is the electronic music producer known as Djoy of Cuba, one of the DJ that has contributed to the spread of this kind of music on the island and now highly acclaimed in the alternative theaters in Havana.

Djoy of Cuba attended for three years the Academy of Fine Arts of San Alejandro until he was expelled for not paying attention in class. He admits that even then the music was a kind of obsession.

“I was studying painting at San Alejandro but music stole me too much space in the creative side. In 1997, a year after leaving there, I organized my first party, and it seems that’s how I discovered my true profession. Something told me this is the way.

“I was the first DJ in Cuba. I opened the way in Havana and taught the main DJ of the Cuban scene as to how to be updated on national genres and how to respect them when making music remixes aimed at younger audiences, “he remembers.

Apparently, there is a relationship between the producers of electronic music and the arts because you’re not the only DJ who studied at San Alejandro. What do you think that coincidence reflects?

Yes, I think there is a connection because the DJ sees musical notes by color. In music there is great plasticity and, through it, I could channel my plastic concerns. As a music producer I work on moods, styles. There are DJs who are surreal, others are impressionistic.

And in your case, how do you define yourself?

I do not think I can define myself in any aesthetic trend because I open many doors, musically speaking. I try to look into all styles. What interests me most is working for the Cuban audience.

What is your concept of World Music?

It is the music of the world. Globalization processes also extend to the musical field. So music becomes one made by different global tribes. Through music artists worldwide can meet and interrelationships between them arise.

In fact, the World Music can be the African, Brazilian, German, English, and Japanese, which is made in the Amazon Rainforest. From the fusion of various musical rhythms new rhythms are born.

I have had the opportunity to participate in World Music festivals like Baranux in Exit (Serbia), the Istanbul (Turkey), WOMEX (Germany) and Bogotrax (Colombia). In Cuba I was founder of the Rotilla Festival that became space for alternative and electronic music. So I think as important on the island celebrate this first meeting HWM.

How do you rate the work of the Sintesis group and Eme and X Alfonso towards promoting alternative music in Cuba?

In my opinion Sintesis is the most revolutionary family, musically speaking. From their work they fused worldwide genres. Eme and X Alfonso are responsible for festivals like Peace and Love and now this HWM. They require greater recognition from the media.

Thanks to the Cuban family of the alphabet a space like Art Factory was born, with the opening of the new headquarters in the former factory El Cocinero in the coming days, it will be a cultural bomb to enhance the spectrum of young Cuban scene right now so contaminated with mediocre music. We really needed good things like this HWM.

What will your participation in this meeting be?

It is an honor to have been selected to participate in this first meeting. In my repertoire I have own songs and my job is to claim the Cuban identity from remixes of popular and traditional music ranging from groups like Los Van Van, Irakere, to Benny Moré, Carlos Alfonso, Silvio Rodriguez and Pablo Milanes. Of course that’s what you will see in the Echeverria during the festival.

Why did they choose as the scene the ballpark of the José Antonio Echeverría Recreation Complex in Havana where there is no tradition in conducting this type of event?

It is a central location, good space for parties. What happens is that has long been administered by outside organizations conducting such events. It’s time to exploit the capabilities of sites like these: conducive to different activities related to the art world.