María Isabel Infante
in Technologies of Communication and Media
0 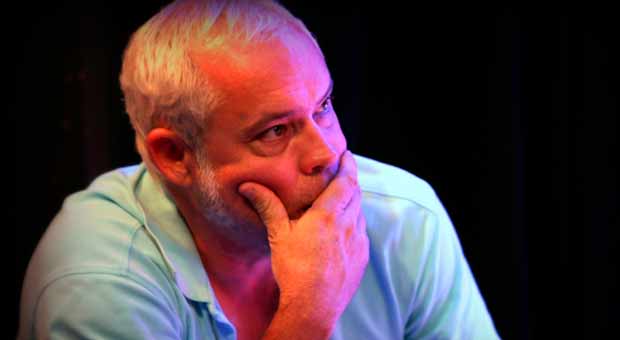 Shows production in Cuba walks through a narrow road; it is not the same saying it than living this “evolution” in flesh for more than twenty years. Josué Garcia, from his beginnings with Carlos Varela and now as director of La Rueda Productions, talks about how many pieces and obstacles he had to move to achieve his dreams as a producer.

How do you rate shows production in Cuba today?

The changes have always been associated with the development of technology; the higher technology the easier the shows have been. The difference lies in that twenty years ago we worked with more enthusiasm and less economic interest. I think that today the artistic matter is sacrificed in favor of economic concerns. We are trying not to be so, but not by going far apart on how the world works. Technology and development allow you many possibilities and there are many people in this country willing to make better shows but adapting them to the easy way, they even do it alone, and do not do it manually and begin to abandon artistic sensibility of the moment. That’s development: working less, earning more…

Living in Cuba and producing shows?

There is no real market production in Cuba. There are party producers that put fifty lamps, two screens, a little bit of music and entertain people. There are large companies that devote their time to show as the colleagues PMM and SARAO, which care about the aesthetic criteria. For artists a production of this kind can be expensive and it is not paid even when you’re working for twenty thousand people, culture in Cuba is subsidized, with which I agree. This is why the artist cannot make an economically good production. Making production in Cuba means no money, our country is underdeveloped, blocked, isolate, all that kind of stuffs that when unite them are reflected in the production of shows as in the other areas of our society.

So, being a producer in Cuba is being a magician?

It always was it, but twenty years ago it was the best magic. I was privileged to be born into this with Carlos Varela, who comes from theater and was always concerned about dramaturgy and staging. This is done in Cuba by few: Carlos, Synthesis band and Amaury Perez, I do not remember anyone else who has done it. Everything mattered, since the set design and lights up to the same songs. You had to do magic to make good shows. I remember doing smoke machines with fry pans heating nitroglycerin and ammonium chloride. There were no mobile lights, there were guys moving sticks up and down, that was a very tough production. It is easier now but anyway you have to do magic, it is not easy to get in the equipment to Cuba, it is not easy to have the budget to buy it or how to do it. You cannot ask someone to bring you to Havana, because EBay says: free delivery (except Cuba ). You have to do some magic to enter it and have it, we cannot rent it to other countries and we have to buy it through third countries and import it to Cuba, which leads to another story.

From Cuba to Tomorrowland?

When you see a mega show like Tomorrowland , with mega sponsors that have money they are putting in exchange for publicity and visibility to an audience paying a mega price, that reverses into much money to make a mega production. When you have no limits for creation and say, I want to do this without thinking that I cannot do it, because the machinery is not here, because there is no money to do it or there is no legal mechanism to do so.

It is less difficult elsewhere, they do not do magic. They raise four phones and ask for 800 square meters of screen, 20,000 lights, six generating electricity units and ¨some¨ artists that move the 8000 people in the square, all by phone. In Cuba when we get that mega sponsor, it does not have permission to put the money in a cultural event because it is not its ¨social object ¨ (buzzword) and Cuban laws do not allow that. Here, of all the things I mentioned, we only have the phone. The point is that you have to think how far you can get and sometimes you stop by things you could have done, but you thought you could not. Usually it’s easier you to be told ¨It can’t be done¨. It is terrible, but this is what the boat brought.

What is La Rueda Productions?

When we decided to make the company, we were several people who were doing different things by themselves and we complemented each other. When there was a big event we needed to work as a team, so we decided to meet. Of those who started, almost none remains in Cuba but La Rueda Productions is still a group of partners who want to do cool things, from our aesthetic criteria. Our work involves doing things with swing and having fun while doing what we love. Working well, is a luxury we can give ourselves at this difficult moment, there are musicians that serve tables in restaurants to live and painters who have to work in agro-market during the day. We are supporting events, creating and covering them technologically. We provide services of production, advertising, sound, lights, stage, stage machinery, scene and artistic direction.

Which of the events organized by La Rueda have given you the greatest joys?

One of the productions that pleased me the most was the concert by Audioslave, which we marked as the beginning of La Rueda. It was the first time an American band that was really on the top list of the United States came to Cuba after thirty years. We also made the scene direction at the Revolution Square, when the Concert for Peace with Olga Tanon, Miguel Bosé, Juanes, Victor Manuel etc. It’s a luxury to have done all the tours and concerts in and outside Cuba by Carlos Varela, who has always well thought the show regarding lights, production and then it is a show in which it is a pleasure dealing with all the details. We work with bands like Air S upply, Kool and the Gang, Calle 13 and it is amazing to see how they join different audiences and it looks like a big party. That kind of show with great bands that manage to unite so many people brings us great joy and provides us huge pleasure.

There is a director with whom we always work and fascinates us: Maestro Luis Najmias Jr.
With him we have made DVDs to Silvio rodríguez, Carlos Varela, Liuba María Hevia, Sory, Diana Fuentes and Ignacio Piñeiro National Septet, among others that have much pleased me. Nerves fly the shooting day. When you make at least the DVD production, it only takes you that part but in the case at La Rueda as a team, we make the production of the concert, the lights and much of the sound, so you worry about a lot of things. It s eems distressing but it is incredibly fun and later when I’m tired in bed I swear not to do it again and the next day we repeat it.

Which are the plans of La Rueda for 2014?
We have a lot of good expectations. It’s like when you leave the house and put a candle to Eleguá for him to take care of you during the day; we put a bonfire for him to spiritually take care of us along the year.

The year is super heavy, now we are assembling the mega Havana World Music and the following week the inauguration of Cuban Art Factory with a concert by Silvio Rodríguez, this project by X Alfonso made us fall in love. In March we are present at the fourth edition of the Peace and Love, where Norwegian, Swedish and Spanish bands arrive. We have too much work in the Book Fair and midyear Cubadisco, which brings us many surprises. We are in the project for Non violence in music ¨ All Countercurrent ¨ led my wife Rochy Ameneiro in ¨ Join ¨ a UN campaign and ¨ the brave is not violent ¨ led by Dr. Julio César González Pagés in conjunction with UNICEF. With the Colibri Label this 2014 we filmed several Dvds. This beginning of year fills us with great joy because we had a lot of work and we are pleased to do with art scripts that require much effort. There are some projects that should not be even mentioned by obscurantism: Don’t say a word, so it will happen