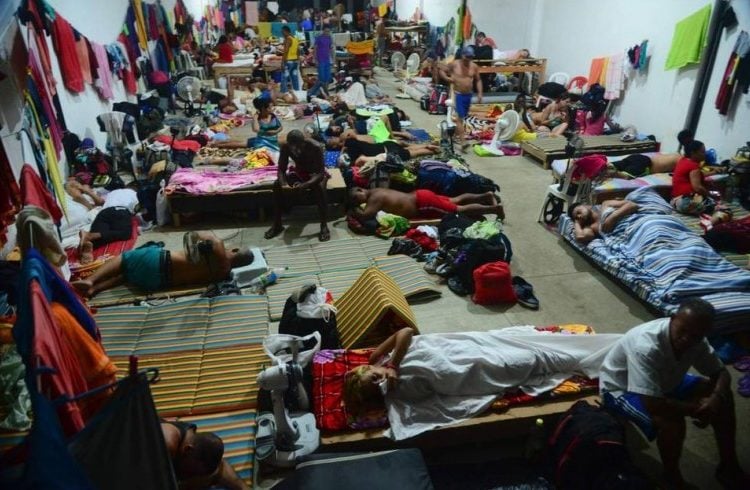 Turbo is a small Colombian municipality located in the Darien jungle bordering Panama. Until a few months ago, it was just a stopping place for thousands of Cuban emigrants who wound their way due north, with their sights set on the United States. In recent weeks, however, Turbo has become the latest camping area and waiting point and for many of them.

Ever since the Panamanian government stopped turning a blind eye and put an end to the unofficial transit of Cubans from South America to northern Mexico, the chances of completing an overland route to reap the benefits of the Cuban Adjustment Act have become scarcer and more dangerous.

The small Colombian territory is now experiencing what Paso Canoas, in Costa Rica, Puerto Obladía and Chiriqui in Panama, and most recently the Arbolito Park in Quito, the Ecuadorian capital have lived through: hundreds, sometimes thousands, of Cubans camped there, in a stopover that becomes a demanding of permission to continue on your way or pressuring for flights that come close to your destination.

But Colombia is not Costa Rica or Panama or Ecuador. President Juan Manuel Santos’ administration warns regularly that it will deport all persons who remain in this “irregular situation” in its territory … and it stays true to its word: until July 11, 2016 Colombia had deported 2,000 841 Cubans, principally to Ecuador (a country from where the majority of Cubans enter Colombia), but also back to the island.

“We have signed an agreement with Ecuador where [Cuban] citizens who have entered via Ecuador will be deported to Ecuador, and this country will make the decision on what to do” the Colombian Foreign Minister, Maria Angela Holguin said in statements to the local press.

It seems that this will be the fate of a – still undetermined – number of Cubans who are currently stranded in Turbo. The municipal authorities have declared a health alert in the face of dangers of overcrowding and strains on their capacities to deal with such a high concentration of immigrants.

Official figures mention at least 950 Cubans gathered in a warehouse, but others raise it to more than 2,000 people scattered throughout private accommodation or even “cambuches” (temporary buildings) they have made themselves, in areas of open ground, with pieces of wood and plastic, without the most basic hygienic conditions.

After the clearing of Arbolito Park in Quito and the deportation of 121 Cubans to Ecuador, where a larger number starred in protests outside the Mexican and US embassies, the number of nationals leaving this Caribbean archipelago for the forested routes continues to grow.

They do not only come from Ecuador, a country where the economic crisis also affects the decreasing job opportunities which has therefore caused some Cubans stationed there to decide to leave. They also come from Brazil, Venezuela and Guyana. Nearly all of them share the conviction that it is better to run all the risks than return to Cuba.

It does not matter that the Cuban government has reiterated that all those who left under the protection of the new immigration policy can return without facing consequences. Nor does it matter that the US government has repeated that there will be no change in the Cuban Adjustment Act. The prevailing feeling is that the end of the migratory privileges is imminent and that the economic situation in Cuba will not improve.

Frequent suggestions for amendments to the Act and the new “economic situation” – as the island’s government like to call it – facing the Cuban economy are more than enough evidence to support these perceptions.

Up to this date some 5,500 Cubans trying to reach US shores have been intercepted at sea and returned to Cuba by the US Coast Guard. Throughout 2015 fiscal year this was 4,473.

The Turbo agglomeration could be the last concentration of a contingent of Cubans stranded in their transit through South and Central America; but it remains to be seen what the next set of circumstances that drive this flow might be.

An Equestrian Club for an Auction of Excellence

AUGE: Molding the Dreams of Others