The well-known “girlfriend of feeling” believes that “the United States does not care about Cuba at all” and that “some of the ideas in Cuba that no longer work should change, but what harms us the most is the blockade.” 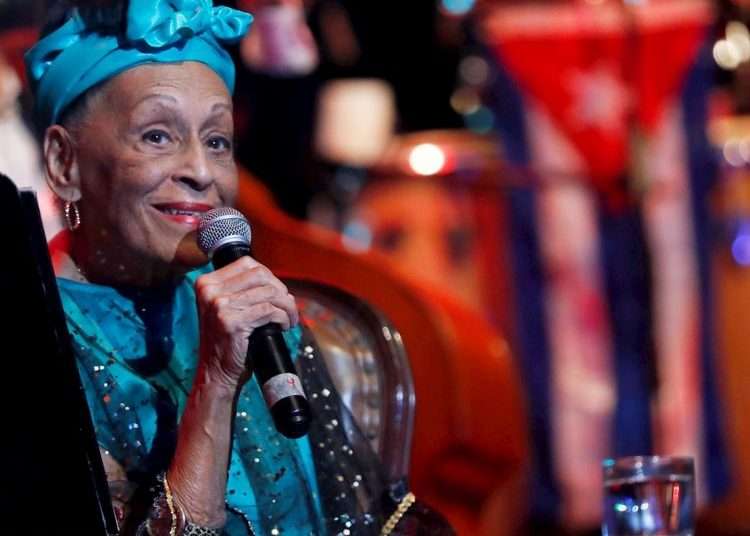 The diva of the Buena Vista Social Club, the legendary singer Omara Portuondo, told EFE on Tuesday that everything that was done for Cuba during Barack Obama’s mandate “has been taken away” and Joe Biden has done almost nothing for the island since he has been president.

Also known as “the girlfriend of feeling,” she is blunt when it comes to answering the question of how she perceives the neighboring country’s relations with the island and if this has affected the daily life of her compatriots.

Portuondo (Havana, 1930) believes that “the United States doesn’t care about Cuba at all, so nothing has changed and everything Obama did has been taken away. Biden has done almost nothing for Cuba.”

The crisis is due “to the blockade that the United States continues to unfairly impose on us,” although she acknowledges that “some of the ideas in Cuba that no longer work must change, but what harms us the most is the blockade.”

At 91 years old, she is still on tour and has just begun a farewell throughout Europe at the La Mar de Músicas Festival in the Spanish city of Cartagena. As she has announced, when she finishes the European tour she will only perform in Cuba or in nearby countries.

She has many memories of her time in Buena Vista Social Club (BVSC), but without a doubt having been able to be next to Francisco Repilado (Compay Segundo) is one of the most pleasant things for her, because “he was a nice and very normal person, as they say, he had a spark.”

By chance Omara Portuondo and her band recorded in 1996 in one of the halls of the legendary EGREM studios in Havana at the same time as BVSC and, while singing “Veinte Años,” Ry Cooder decided to record the take that became part of the record.

Omara usually remembers in her interviews the hardships she suffered in her childhood, which she believes helped her to be who she is, an admired singer: “of course, there are many artists in the world who have experienced the same thing, so I think that it is one of life’s tests, one that teaches you.”

She got to be in the mythical Tropicana club about which she usually tells many anecdotes. Omara had seen her sister Haydée rehearse there so often that she knew all the steps, so in 1945 she was asked to fill a dancer’s spot that was up for grabs.

“There was an atmosphere of work and camaraderie. The most important artists in the world have passed through there. I had the privilege of working with Nat King Cole, Tony Bennett and Benny More, and other Cuban artists like Bola de Nieve or Rita Montaner,” she recalls.

She says that the secret of her longevity, in addition to the crackers with water and brown sugar she had in the 1930s, has been the swimming that she practiced very often.

She made her solo debut with the album Magia negra, from 1959, in which she mixes Cuban music and jazz. In 2009, with the album Gracias, she won the Latin Grammy in the category of Best Contemporary Tropical Album, and during the pandemic, her album Mariposas was released.

Among the recent collaborations in which she participated stand out in 2017 “Échame a mi la culpa,” with Julio Iglesias; in 2020 “Lágrimas Negras,” with Raphael; in 2021 “Horizontes de Niebla,” with Rozalén; and in 2022 “Te Venero,” with C. Tangana on the album El Madrileño.