Tuya por siempre (Yours forever), a documentary by Paul Massip 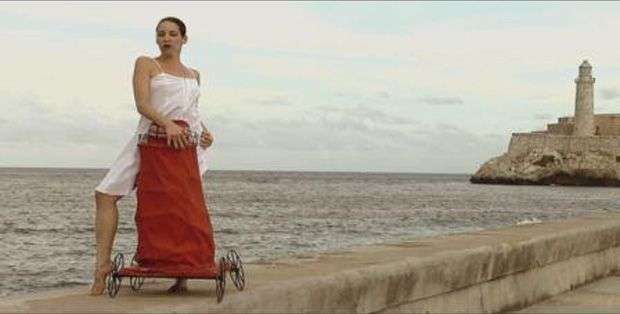 The choreographic piece María Viván, played by Rosario Cardenas Dance Combinatory Company, is the central argument of the documentary ¨Tuya para siempre¨( Yours forever), by Pablo Massip. Based on the poem of the same name of the Cuban iconic poet, novelist and playwright Virgilio Piñera, Maria Viván came to the Havana scenarios for the first time 15 years ago, on the occasion of the 85th anniversary of the birth of this writer, whose centennial in 2012 led to the revival of the hit play.

According to Massip, the main motivation for making this documentary was to settle an old debt of national cinematography with two great of Cuban culture: the dancer, teacher and choreographer Rosario Cardenas and the late author of Electra Garrigo, for his 100 years.

The production team of this new installment of Cuban film industry,-which was advised by filmmaker Enrique Pineda Barnet (La Bella d el Alhambra, 1991) -, was made by producer Santiago Llapour, Mandy Garcia in editing , Raymer Casamayor in sound and the soundtrack, Juan Piñera in music and Massip himself in charge of photography. The film also features the voices of authorized friends and connoisseurs of the trajectory of the experienced dancer and Virgilio’s work such as writer Roberto Perez Leon, artist Manuel Lopez Oliva, the dancing critic Ismael Albelo and the enshrined choreographer Ramiro Guerra.

Massip told OnCuba on how emerged the idea of bringing to the movie this choreography.

“The original idea for this documentary belongs to Omar Gonzalez, president of ICAIC. A few weeks before the revival of the work he heard Rosario Cárdenas talking about María Viván in one of the news programs of Cuban television. Then he told Enrique Pineda Barnet it would be great to make a documentary to pay tribute to the trajectory of this remarkable dancer and to Virgilio Piñera in the year of its centennial. E nrique, who was busy by then preparing his new project, proposed me the idea and I agreed to do it. ”

On the challenges of undertaking this project Massip commented:

“The project was approved in the same week in which the play was premiered, so I did not have the opportunity to research about Maria Viván. I had not seen the play and I did not have time to find out more about Virgilio, of course I read his work many times, but Rosario’s interpretation is not only based on Maria Viván, but in all Virgilio´s work. During the filming process I discovered, in the old style of ancient ICAIC documentary makers, the experience of working with my father ( Jose Massip; Pages of Jose Marti’s Diary, 1971), he was the only one who had the script on his head. When we arrived in the morning my father said, “let’s do this” and he created on the fly. ”

What did you propose to reflect in the documentary?

I tried to show the working method that Rosario has. She works alongside her ​​dancers based on a deep study of space, where distance and movement are very well calculated. But Rosario also gives of herself and uses the concepts of Lezama and Virgilio. She deeply studied the work of Lezama Lima and Virgilio of course, and uses the ” concurrent random ” which are terms absolutely from Lezama and that sometimes is difficult to understand for a mere mortal. She uses the ‘poten’, which are terms that are very clear and when Rosario explains it, you understand her drama, her way of creating. It is very interesting because she transmits this to her dancers , who slowly discover her world and the result is on what she is creating and on what she offers to the public.

When I decided to make the documentary I went to the streets. I did not want to film only the staging. I wanted to show Rosario in her natural environment, with her colleagues, her friends.

Why did you use this title?

The poem Maria Vivan is full of subtleties and details because it tells the story of a woman who is destined to die from tuberculosis. She knows she is going to die and wants to give her boyfriend a photo. In this picture, which is done in a garden at some place of Havana, she prepares herself, dressed in a suit of evergreen, she puts a hat and assumes a pose – and these are Virgilio´s words, of a person who has tremendous vitality, but is dying, and she wants to offer herself to her boyfriend, she wants to perpetuate herself in the memory of her boyfriend and puts a dedicatory inscription which reads ¨Yours forever,¨ which is the title of the documentary, but she also sheds a drop of blood in the paper.

It sounds dramatic but according to Virgilio, Maria Vivan was a photogenic consumptive. A tuberculosis sufferer is pale, you can not relate her to someone who is photogenic and that use of irony adds brilliance to this poem. That’s why Virgilio also says in the poem that the photographer immortalized her forever.

How much does the film take from Virgilio?

The documentary also narrates Virgilio´s life and what he stands for national and international culture. Virgilio is known not only in Cuba, he is famous worldwide, if there were Martians on Mars somehow they read him to study us, the humans, because that is precisely what an interviewee says “Virgilio was a man in conflict as we all are, but we also generate conflicts,” that was Virgilio, a human being like all of us and that is also reflected in the documentary.

I always had a special admiration for Virgilio. I have not read all Virgilio´s work but I have attended his theater plays.

I have also had my interpretation of his texts. Virgilio is a man who is infinite, no doubt, but I also felt a great admiration by Rosario Cardenas, whom, as I said yesterday in a radio program, I consider as a sea, a wide, deep and blue ocean, and this is in my opinion the color Rosario has because she is a woman who thrives on everything.

This was truly an amazing experience for me and there is the result.

Are you satisfied with the result?

I’m not completely satisfied, I would have put other things, but time, concern, perhaps the same self-censorship, but I think that in the documentary I expressed what I want to say about many things.

The photography direction was also under your responsibility during filming. What can you distinguish from both disciplines, how one complements the other?

The photography work helps me to compensate the direction work because I’m imagining it when photographically directing, and perhaps beyond, when editing. It complements in everything, in dramaturgy, in the picture, in color and tremendously requires you because photography is a big responsibility. In the documentary I also had to work as a camera man, of course I kept the most comfortable camera for me, I left my camera fixed and I went to see other’s filming. The truth is that it’s very hard to direct and being the photography director at the same time because those are specialties that complement each other, they are a marriage and they both require a lot of concentration .

Massip Paul is a graduate from the Art Faculty of Audiovisual Communication Media of the Higher Art Institute, in the specialty of direction and workshops at the International School of San Antonio de los Baños.

He has excelled in documentary filmmaking in the theme of Science, Technology and Environment, receiving national and international awards. In 2001 he won the Global Video Competition sponsored by the United Nations Environment Programme.

As director of photography he has worked under the direction of renowned filmmakers of our country as Enrique Pineda Barnet and Tomás Piard, among others.

Tomás Sánchez “Culture is the soul of a country”

Spiritualists of the world ... Unite!