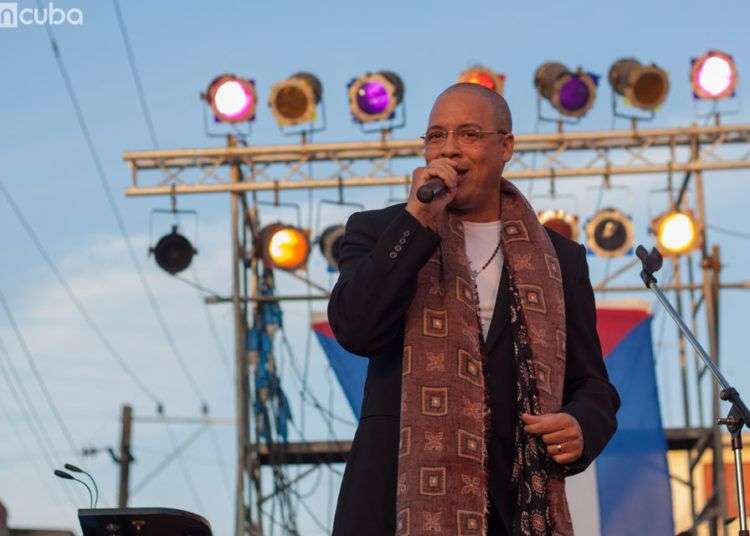 This Saturday Isaac Delgado (Havana, 1962) has returned to the United States but the one who writes could bet that he had a Good Friday he will not forget: after 7 years of absence he sang again in Cuba.

Invited by Silvio Rodríguez, the sonero-troubadour went up the solid, sober and itinerant scaffold mounted in Correa and San Indalecio streets, in Santos Suárez, and intoned that memorable Necesito una amiga, that it connected it immediately with the public. “Thanks for the company and to Silvio, for the love”, he said to the public who spontaneously approached the place with a mixture of surprise and happiness.

“He did not want me to sing any of his songs but this time I will not pay him attention”, he said and they began the chords of: Quien Fuera? He was accompanied by the counter bassist Jorge Reyes, the percussionist Oliver Valdés and, in the piano, Cucurucho (Roberto Carlos Rodríguez), from Van Van.

That was followed by Solar de California (“ I keep on being a barrio guy ”, he confessed with certain touch of nostalgia) and closed his brief but unforgettable presentation with the world premiere of Cubanos, that with salsa rhythm describes in its verses to those born in this land as been born “ of the sound and the rumba … Latin with a universal touch ”, capable of turning “ the pain in melody ” and ready to do “ the way between tear and song ”.

I will record Cubanos soon with Van Van — he confessed to the public — It is of Juanchi (Juan José Hernández), a big Holguin author that have lived in Puerto Rico for years and from whom Gilberto Santa Rosa and the Gran Combo have sung several songs. He, as many emigrés, has his heart in the Island”.

In a break in the porch of the neighbors who lodged Silvio and the troupe that accompanied him in the 39 concert of his Tour on the Barrios, Isaac Delgado granted us a few minutes. He was happy, with this wide and sincere smile that confirms him as the everlasting Chévere.

After 7 years without singing in Cuba, you come invited by Silvio Rodríguez: why?

It is a friendship gesture from Silvio. He has always been a brave type, ready to break schemes. Also I have a special fondness for trova. I was born in a house of troubadours, of the Old one and later I knew of the New. In my career I have a disc devoted to it (CD Versos de mi cielo) where I was lucky to sing with Silvio. A few days ago we met and this invitation arose. For me it has been a big opportunity that it was not planned. Somehow life puts you in the correct place, in which you must be when you have to be.

Has the public given you life back?

This public has always been in my heart and I believe that I also remain in of them.

Was this a business trip?

I have all my family in Cuba, I come to see them, but the trips turn almost always into something professional. When one stays away from the national panorama so much time, then obviously friends call you and propose to do something. There exists the opportunity to work with many people and although I am not going to be able to do everything, yes there are some anticipated projects, like one that is organized on the rumba. I have the happiness in addition to being preparing some topics with Cuban bands, Van Van among them, and also with young artists.

What do you miss the most of Cuba?

What I miss the msot is the people, how they are with you; it is something hits me hard and sets my heart to beat much faster. This night I have lived through a different emotion. It has been strong that thing about to come and to see that, after so much time without having your public, the connection, the bond, the love are still intact.

To sing with Silvio also is a brave gesture of you …

Yes, there are some risks you need to take …

You assumed them from two shores …

My heart is always in the Island. There the one that politicises any artistic fact, this is his problem. I, simply, am singing to my people and to my country.

Without doubts this Isaac’s meeting with the Cuban public was the assertion of that sides, artist and public, are ready for more. And it is important that there was happening in the context of the tour of Silvio Rodríguez on the barrios, a project that been sowing good music and good taste on the humblest spaces of Havana. As the Cuban troubadour recognized minutes after the concert concluded, “Isaac is a musician of this country whom the people love, he comes constantly, I do not see why he could not sing. I am not thinking about having done anything extraordinary on having invited him; it seems to me slightly natural. Tough luck for those who do not do it. It was not anything prepared, it happened because I ran into him another day and he said to me that since he was living out he had not sung again here. But how are not you going to sing here?, I asked him. And you see, people treated him as if it had been yesterday that they stopped seeing him”.