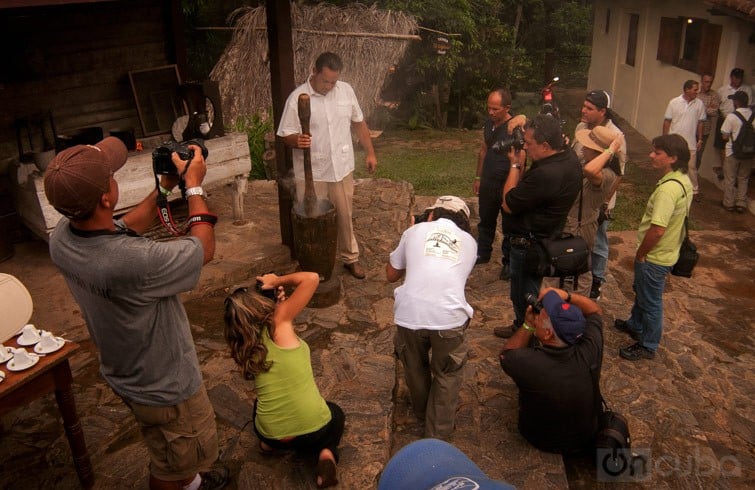 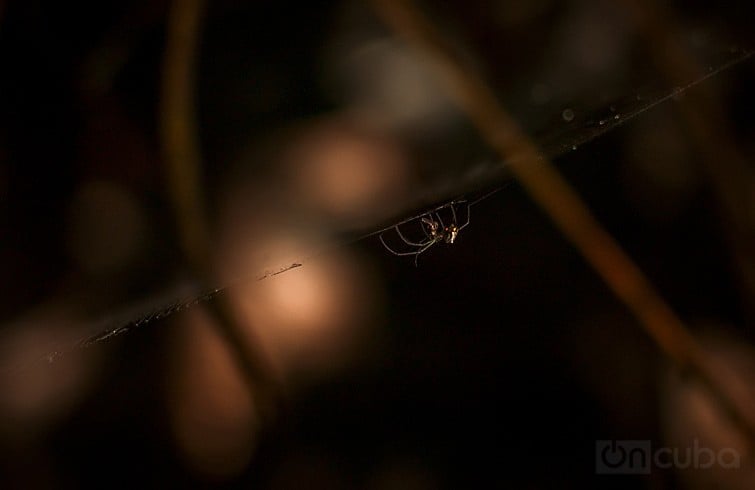 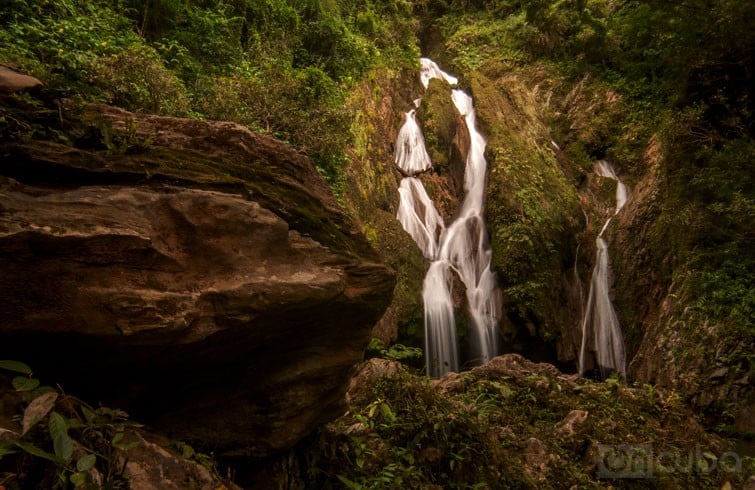 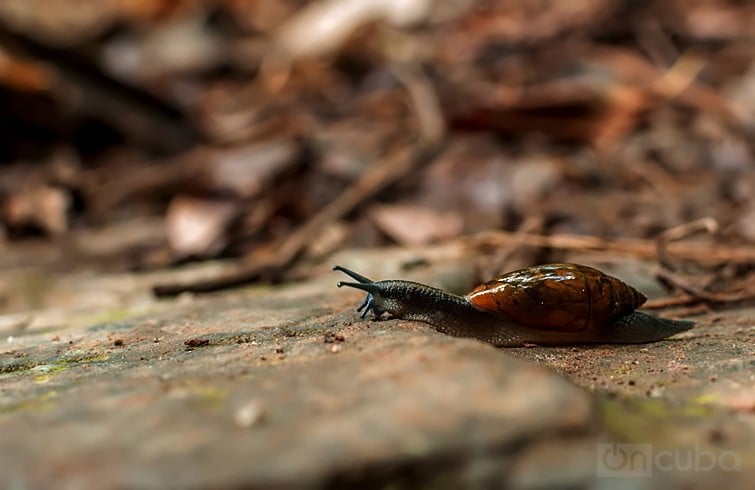 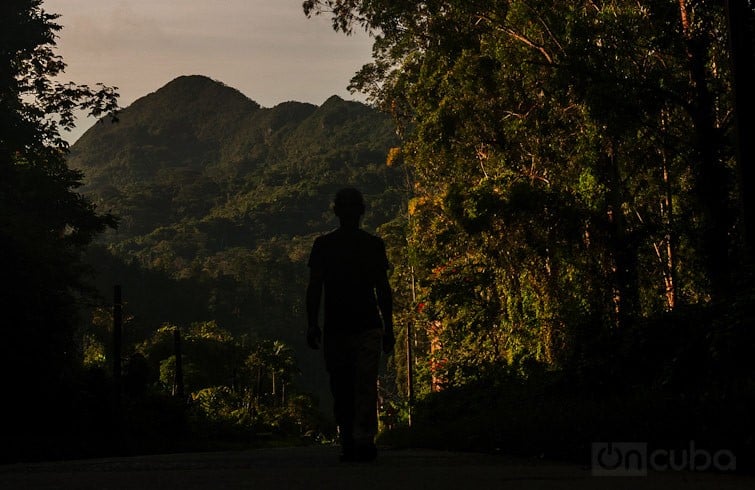 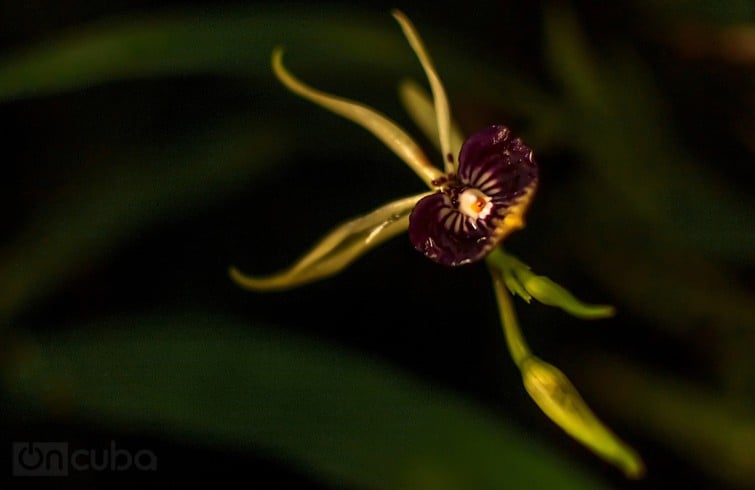 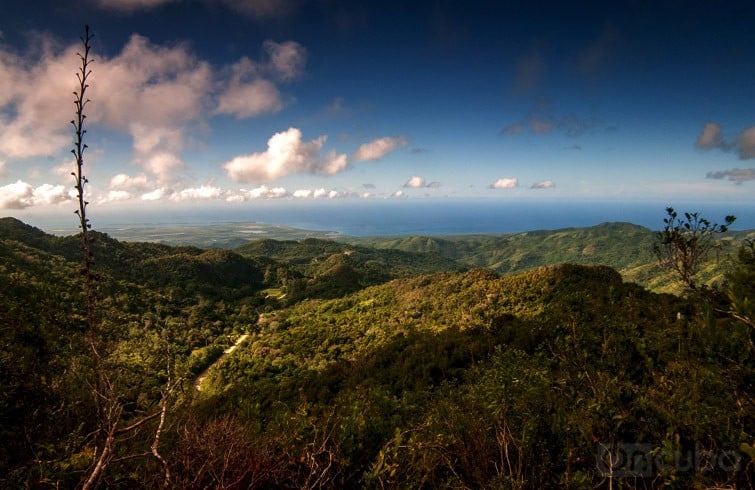 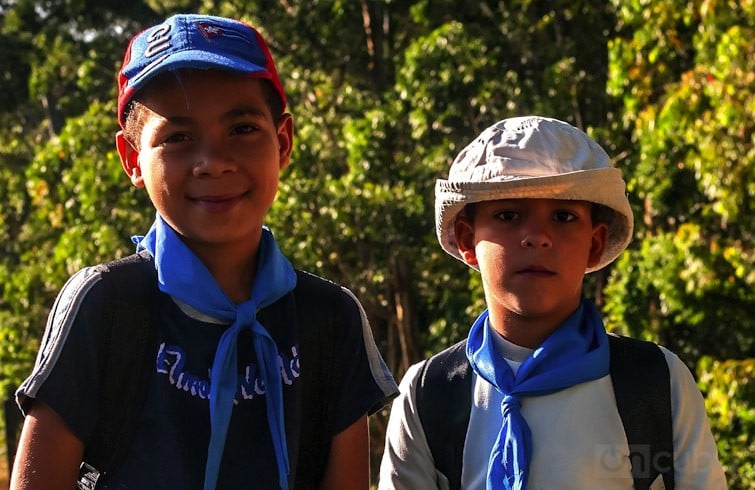 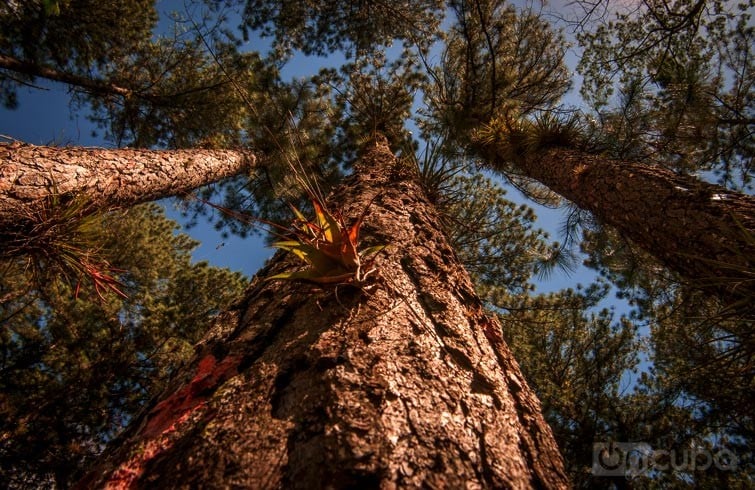 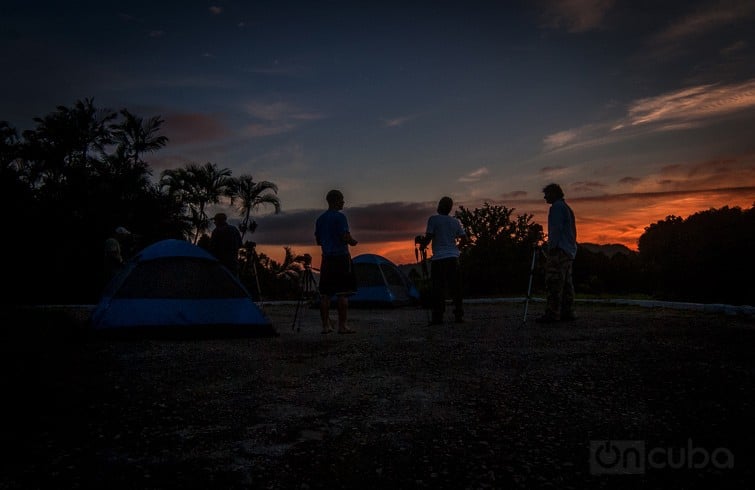 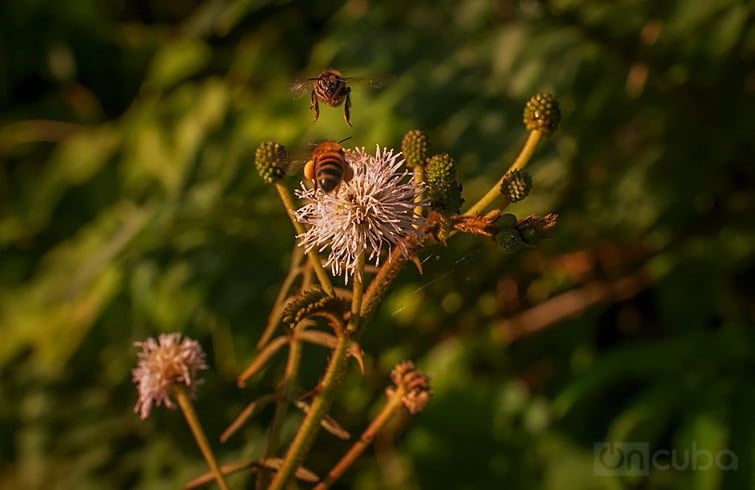 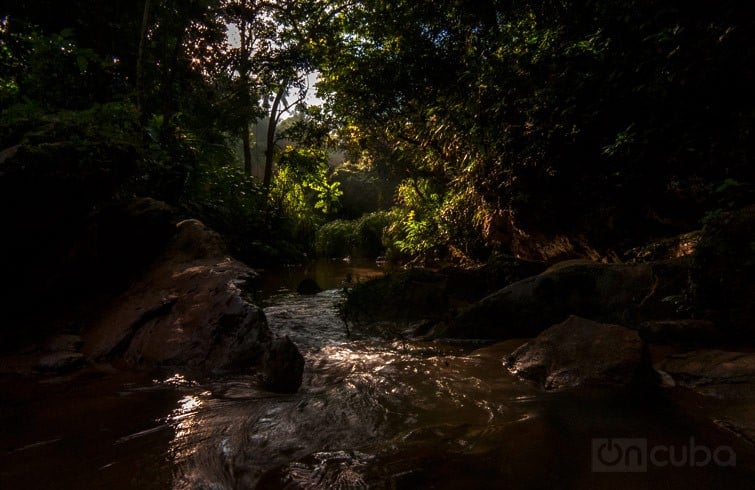 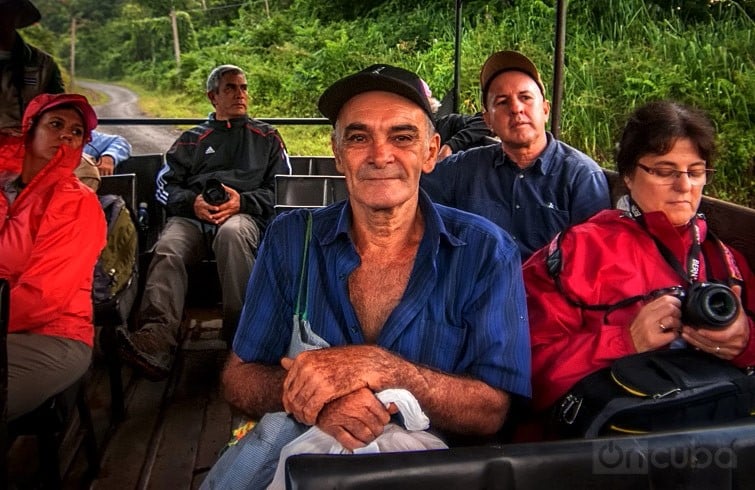 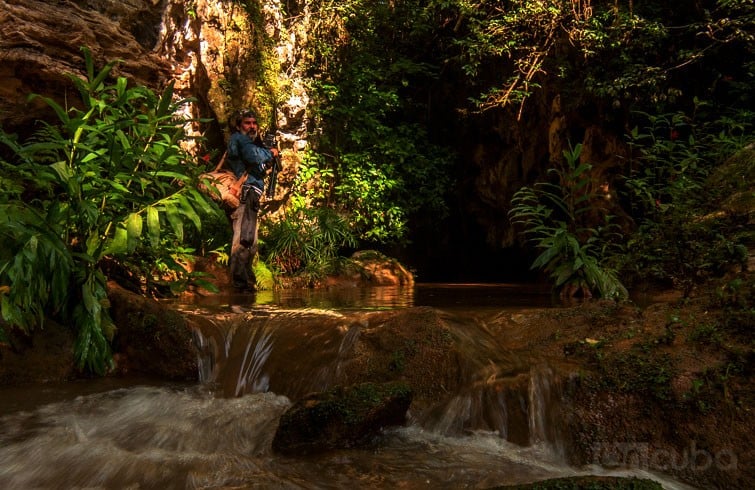 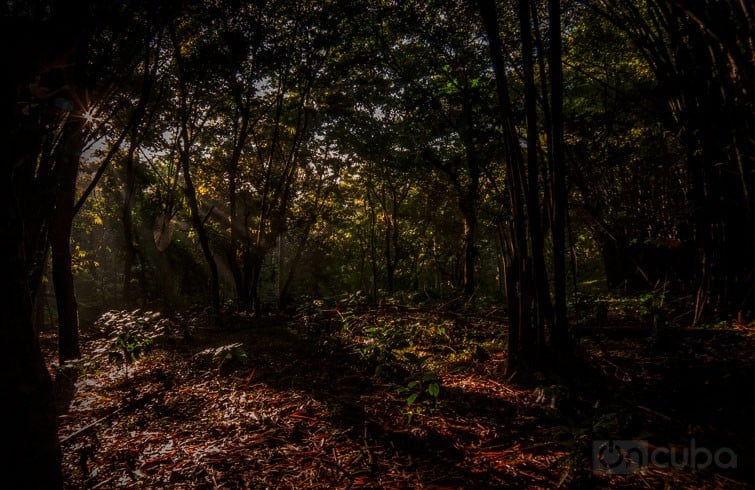 After passing the village of Manicaragua the engine speed has increased. The bus is not afraid of the mountain, and it heads straight ahead, full of inertia, towards the next slope. Inside it, almost everyone knows each other. Now they are talking about models of cameras and lenses, or new acquisitions in terms of nature photos and documentaries. We are just arriving to Kurhotel, a monumental building at human scale, but tiny between the mountains and forests of Topes de Collantes in the Escambray heart. Because we are heading to Topes, to the “2014 Digital Nature” photography competition organized by the “Gaviota” Tourism Group and the National System of Protected Areas (SNAP by its Spanish acronym).

Silvio González, director of the resort welcomes. Meanwhile, Frank Oltuski, Gaviota vice president salutes us on behalf of the company, and invites us to try the authentic mountain coffee, which is always marketed as a bulk product. Then we witnessed tributes to the botanist Jesus Cañizares and Eduardo Aguiar Martin, recently deceased, one of the biggest promoters of nature photography in Cuba.

The rules: Three images per contestant in each category. Photos will be valid from 12:01 am of Tuesday until 10:00 pm of Thursday. JPEG format, with no other post production than cut, bright and contrast. Photoshop pluggings and excessive retouching are prohibited.

Dr. Julio Larramendi, president of the jury, says that t here are only two types of pictures: good and bad ones. Landscape: documenting spaces creatively. Flora and Fauna: It is not the mere portrayal of the species, but to discover an attitude, preferably similar to human behavior. Macro: Exploring the world of smallness, what we do not see with the naked eye. Man and Nature: Relationships of coexistence, both of benefit and harm. Do not stay in the simplicity of portraying his colleagues taking pictures, in Topes de Collantes people mainly work in coffee plantations, but there are also activity in the wood, honey and livestock. Extraordinary Category of Exotic and Invasive Species: the way in which biodiversity is affected by the species that do not naturally belong to the ecosystem.

Pseudonyms and field sessions are drawn. From Tuesday to Wednesday the contestants will be camping at Codina, Guanayara, El Cubano, El Nicho and Vegas Grandes parks. On Thursday there will be an “open forest” activity in Javira, Mogote, Mi Retiro, Finca Cuba, Casa Azul, Las Riveras de Hanabanilla and Los Nengoa.

The villa “Mi Retiro” is located on Topes de Collantes to Trinidad road. It is said that it was ordered to build by a banker from Camagüey before 1959. It is now a restaurant, and during this night, it will be the site of the encampment of No. 5 contestants group.

The pine forest begins when crossing the road. A path passes through it and leads to the top of a mogote. Dunieski, the gardener, opens the way with a machete and now points towards a tiny black orchid. At the peak, and heading north, the villa, road and Kurhotel can be seen. While to the south, we can observe the remains of Escambray to the coast, and the intense and misty blue of the Caribbean Sea.

The flavor of the Escambray awakens palates numbed by artificial flavorings. No sooner concluding dinner the truck horn gives the signal. We must seize the afternoon.

The vehicle stops and now we continue on foot. The trail descends down the slope of the mountain in countless curves, to die at the foot of Vegas Grandes waterfalls. It is unlikely that another photo of the waterfall to be a finalist, but the important thing is not to arrive there, but the surprises that can appear along the way, like finding a snail in motion, or a metal bowl where water and time have drawn something similar to a human face.

It rains, and after the downpour the clouds surround the woods, furrowed by the silhouette of a man who crosses it and looks tiny next to the pines. Someone once said that the majesty of a landscape was not in the form, composition or light, but in the tiny seize in which it makes us feel when compared to Nature.

There is not need of alarm clock. Two stirrings become one: the hosts prepare breakfast and contestants lace up their boots, prepare their backpacks and placed recharged batteries and empty cards in their cameras. Some people got up too early and are walking and capturing landscapes under the light of dawn.

The category of “Man and Nature” was almost unfilled last year. To search for flora and fauna you need to walk through trails and mountains, but if you want to achieve the human touch you must take the road. You must walk up and down the hills, village, school, trucks loaded with people. It is not still the coffee season. Honey is produced, but far, just like wood.

The morning does not end or the mountain. What is essential to capture images of nature is not the camera but patience. Spiders weave their nets off the roads, because that’s where insects fly more freely. The lizards are territorial and are put on guard in front of any animal or thing that penetrates their territory. The frogs seek damp places and the smallest ones can barely be seen only when jumping.

We finish the tour to “Mi Retiro”. The truck will return to “Los Helechos”.

“Open Forest “, hunt, free for all. The departure was at 5:30 am towards “Los Nengoa” and its cavern. The Ural truck breaks the darkness and silence of the morning on the road leading to Cuatro Vientos community. It stops now. Odalys-the guide- says there is a good view towards “Hanabanilla” dam from here. The vehicle turned off the engine and lights, and in the dark only the chirping of cicadas can be heard. The only light is from the stars. For moments everyone has remained like floating, but the lethargy lasts just a little and the naturalists go with their lanterns in search of nocturnal species while the landscapers emplace tripods and await the first lights.

One of them continues walking looking for a unique image. A farmer comes closer to him. His name is Miguel and he is on track to his farm where “La Gruta” is. He cultivates coffee with her three brothers, but at 64 he has no children to bequeath the land that was granted to him by the Agrarian Reform. He went to the town of Aguacate to visit a woman. He is carrying a bag with fresh bread for the chickens because he says he does not like bread.

A sign announces “Los Nengoa”. A bamboo plantation spreads all along the banks of the creek. The stems reach fifty feet, and there are newly woven cobwebs hanging between them, shining through the rays of morning sun that slip through the foliage. Then it appears “La Gruta” and its waterfall.

At noon we had lunch at a farmhouse where hospitality makes up for the lack of electricity. We barely had time to say thanks. We should go to the hotel as soon as possible to choose, edit, and submit photos to scrutiny.

The jury’s decision took the entire morning. It will be a secret until the night. In the morning the photographic exhibition “Peasants” is inaugurated by Julio Larramendi and Chip Cooper, at the Topes de Collantes Museum of Contemporary Cuban Art. Then we went to Trinidad city and drank canchánchara and made tours guided by Victor Echenagusía, specialist in the Office of the City Historian.

Chip Cooper, American photographer, teacher and renowned portraitist, honors the jury with his presence. He teaches lectures and shows the series of portraits of American writers that gave him prestige within American photography . Now he works alongside Larramendi in a book of photographs of Cuban peasants, which purpose is to revere them decently and respectfully. He is s peaking of cameras, lenses and stobe lights, which are always the ones he uses, because it is very important that the eyes to be seen. But the essence of the portrait to Chip Cooper is apparently summarized in three words: attitude, attitude, attitude. The attitude.

Contest: the subjectivity of one person according to the subjectivity criterion of four. Finally, the jury’s decision was announced. Larry Acosta won the “exotic and invasive species” award. In “Man and Nature” category, Miguel Angel ¨Chino¨ Meana takes the first and third prizes while Marilourdes Pino finished second. The first place in “Landscape” went to Carlos Ernesto Escalona, who was escorted by Fernando Álvarez Valdés (Ferval) and Aliesky del Rio. Mabel Gutierrez, Aliesky del Rio and Horacio Orlando Sotolongo, in that order, were the winners in “Macro”. Meanwhile, “Flora and Fauna” awarded to Rolando Trujillo, Maydiel Cañizares and Claudia Rodriguez.